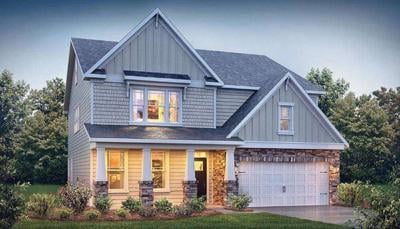 Finally. D.R. Horton was able to do what Diamondback Investments could not.

After nearly three years of public hearings, discussions, hundreds of social media posts by those against, and other public meetings, on Jan. 17 the Jamestown Town Council approved development requests for the former Johnson farm along Guilford College and Mackay roads, as yet un-named.

Developer D.R. Horton received unanimous approval to annex the property as well as rezone it from Agricultural (AG) to Planned Unit Development (PUD) on conditions set out in a development agreement between the developer and the Town. This agreement also was unanimously approved after months of back and forth between the company and the Town.

According to Jamestown’s Land Use Attorney Tom Terrell, this is the largest land use decision since 1752, when the Town was first settled.

Marc Isaacson, attorney for D.R. Horton, said the parties involved went through the entire Land Development Ordinance (LDO) to ensure the builder would be compliant. Finding some unacceptable areas, the company requested a text amendment to the LDO regarding the PUD, which the Council also unanimously approved.

The rationale for the text amendment was that the original PUD section of the LDO — created June 2020 — applied only to small subdivisions, not the 1,500-unit development D.R. Horton proposed on the approximately 467 acres. Part 1, Article VIII, Sec. 8.3 of the LDO was changed to read, “The Planned Unit Development (PUD) district recognizes that some projects on large tracts require much greater flexibility to enable applicants to create higher-quality projects than are otherwise possible under the strict applications of the LDO … .”

Councilmember Martha Wolfe suggested an amendment to the text amendment that would allow a PUD applicant the “flexibility,” rather than “freedom,” to create its own development standards … (Part 1. Article Viii, Section 8.3 Description of Zoning Districts). Terrell, who presented the amendment, agreed, as did the Council, which found the amendment consistent with the LDO.

It took the Town Council less than 30 minutes to make its decision.

Several members of the standing-room-only audience took issue with this process but amendments can be done at any time and become effective immediately.

During public comment, Robert Frederick remarked that since this amendment changed the PUD, Council could not legally vote on D.R. Horton’s plan since it was constructed using earlier PUD specifications.

Others opined that D.R. Horton is telling the town what to do.

Brent Ayers said the text amendment gives the developer more flexibility and wiggle room and less flexibility to the Town.

Nicki Stewart asked why the Town is bending over backwards to get the same development Diamondback Investment Group proposed. She quoted reasons from previous Town Council minutes as to why Diamondback was denied, citing these were the same reasons D.R. Horton has asked to be accepted.

The Council took over one hour to hear information regarding annexation of the former Johnson Farm property before making their unanimous positive decision.

Introducing the public hearing for annexation, Town Manager Matthew Johnson pointed out that rather than four parcels of land, the property is now eight after Guilford County re-assigned parcel numbers but this did not change any of D.R. Horton’s requests or the amount of acreage under consideration. He added the property has been part of the Town’s Extra-Territorial Jurisdiction for nearly 40 years.

D.R. Horton proposes to “develop a high quality, master-planned community including numerous housing types, site features and uses not permitted in the agricultural district,” according to Johnson.

In answer to Councilmember Lawrence Straughn’s question, Terrell said the original commercial portion has been removed, thus lowering the potential traffic in the area for those residents visiting commercial businesses..

The Town Council took less than 16 minutes to unanimously approve the rezoning petition.

“A zoning map amendment is different from a PUD rezoning amendment,” Terrell said. “A PUD zoning difference is essentially a blank slate. For a tract of this size, I believe there would be unanimity in a planning community that a PUD zoning district, if it’s done right would much better serve the public and the Town.”

A draft development agreement was posted on the Town’s website Dec. 15, then updated Dec. 21 and Jan. 3 before the final draft was posted Jan. 11.

The development agreement will run for 40 years and will stay with the property no matter who the owner is. Should D.R. Horton sell the property, the new owner would be required to abide by the agreement.

Wolfe suggested two amendments to the development agreement, which were approved by D.R. Horton.

The Council took approximately one hour to hear information about the development agreement before giving it unanimous approval.

“The reality is, this is the best we can get from this developer,” Wolfe said.

Terrell pointed out that the two largest cities in North Carolina, Charlotte and Raleigh, do not do development agreements.

“This development agreement has been a tool for elevating the quality of this project,” he added, “and for giving the citizens of Jamestown something that is far better than what could have or would have been approved under a standard zoning.”

D.R. Horton has not had engineering done for a final site plan. There are nine different types of housing planned with open spaces and trees. The company is working on a plan to preserve some of the history of the property with photos displayed in the amenity center.

“The historical aspect is going to be awesome,” said D.R. Horton’s Ryan Motes. The company plans to improve the design of the amenities center, which will look like the Mackay hunting lodge, and display historic photographs.

The Futrell-Mackay-Armstrong house does not appear to be in savable condition, however.

During each of the four public hearings relating to the D.R. Horton project, citizens had the opportunity to voice their concerns. Several people spoke during all four hearings. Each comment was received by applause from the audience.

Most of those speaking were, as some said, frustrated and outraged by the thought of this project. They asked all votes be postponed. Some stated the Council is not listening to citizens and valid questions are not being answered, nor is Council following procedure and is not being transparent.

Environmentalists said the development agreement was locking Jamestown into the environmental and ever-changing world as it is now.

Most in the audience were unhappy with the density of the proposed development, which would be 1,500 units with 3.2 units per acre. The previous project submitted by Diamondback was for 1,269 units with 2.75 per acre. Residents also believed that density to be too high.

Terrell noted that the apartments are included in the 3.2 units per acre number.

Seth Harry and Associates, community planners, held property visioning workshops in September of 2021 and as a result of input by attendees — including D.R. Horton employees — came up with a plan for the property. No one spoke up to say the plan Harry came up with perfect but it was mentioned that it was better than the one Diamondback presented.

Katie Gumerson pointed out Harry’s plan was not what Horton shows in its plan, which includes apartments and townhomes. Harry’s plan did not.

One citizen pointed out that Harry did not ask for input from attendees, rather only giving them choices. She also noted that D.R. Horton employees were allowed to vote, which skewed the results.

Jessica Brooks Ingram Odell reminded the Council that the old Jamestown Public School had been scheduled for demolition until a group of citizens rallied to save it.

“We feel helpless,” Odell said, adding that she feels the Council is washing its hands of the residents.

The meeting, which lasted over 3.5 hours, including two 10-minute breaks, is available at www.youtube.com/c/TownofJamestownNC. All information about the rezoning, annexation and development agreement are available in the Jan. 17 Town Council packet at https://www.jamestown-nc.gov/my-government/meeting-minutes-and-schedules and https://www.jamestown-nc.gov/my-government/planning-zoning.

Because the meeting was recorded, you can review all of my comments here.

These links will take you to the 5 times I spoke during the meeting.

A suggestion regarding process for the meeting itself:

In response to the first public hearing (text amendment):

In response to the second public hearing (annexation):

In response to the third public hearing (rezoning):

In response to the fourth public hearing (development agreement):

Please listen to what I said and issue a printed correction.