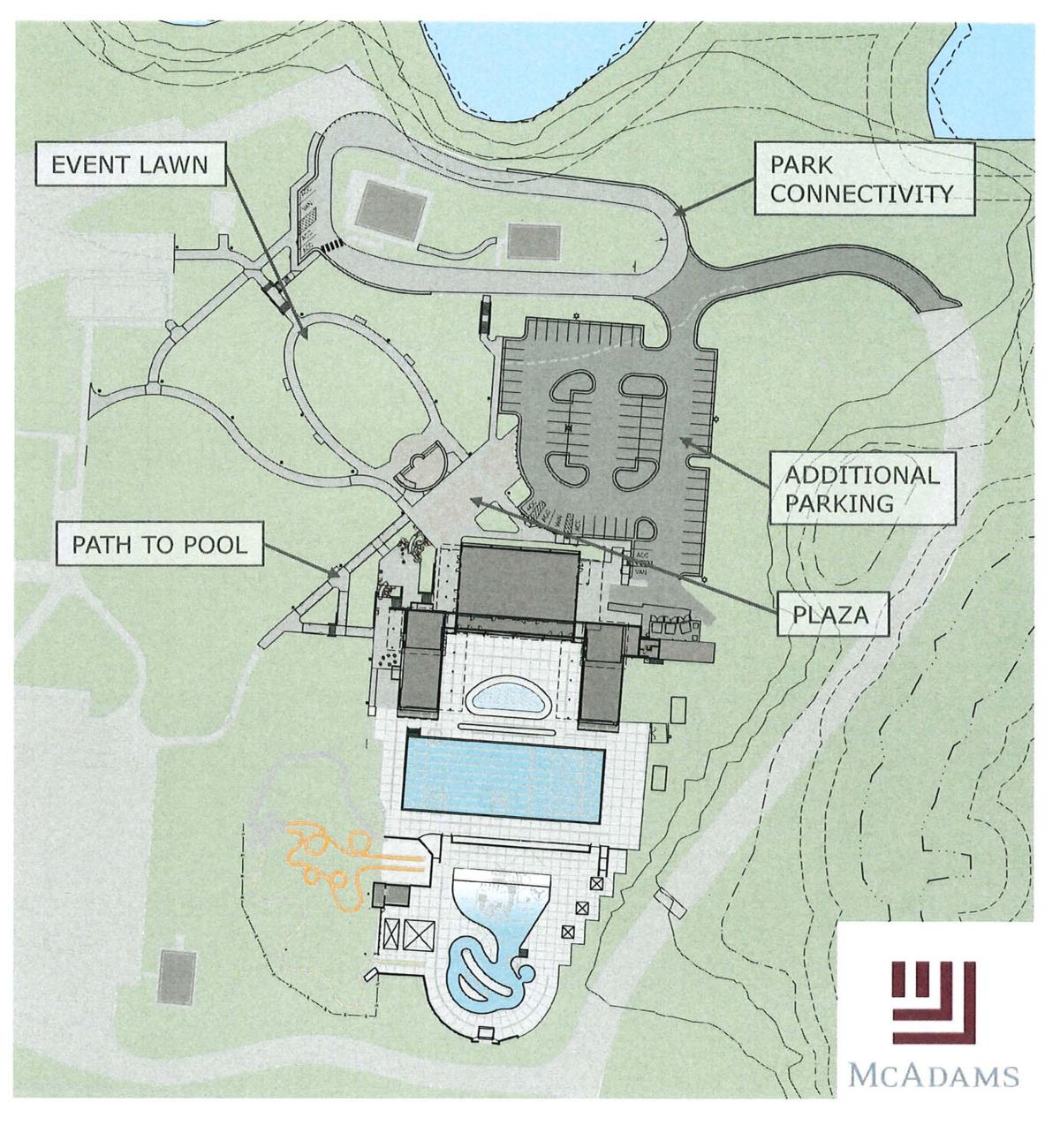 Additional parking will be added on the north side of the pool and the event lawn shifted to the west. 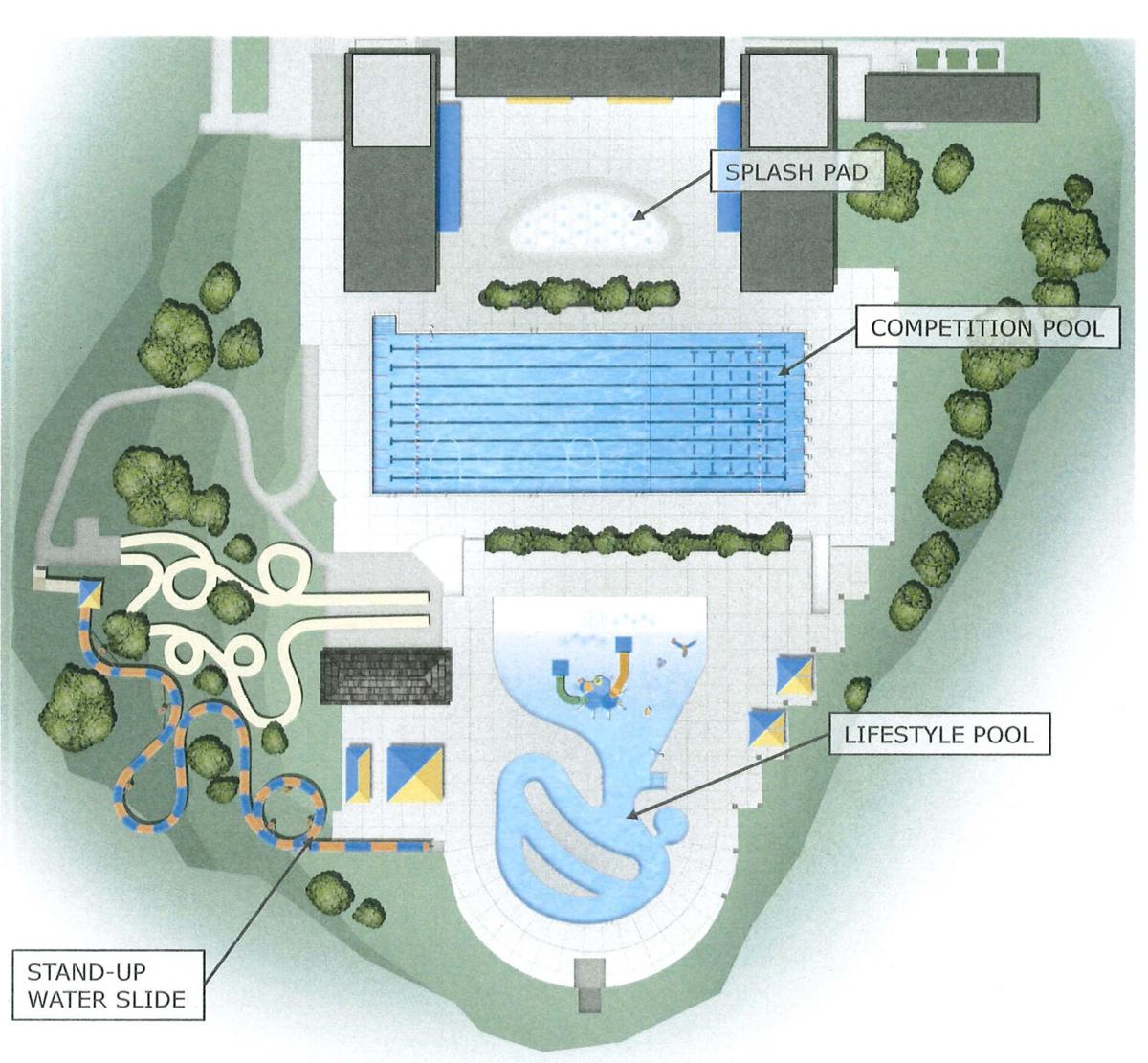 Following renovations, the pool area will separated into two parts, with competition lanes remaining and a ground-level entry and lazy river added. 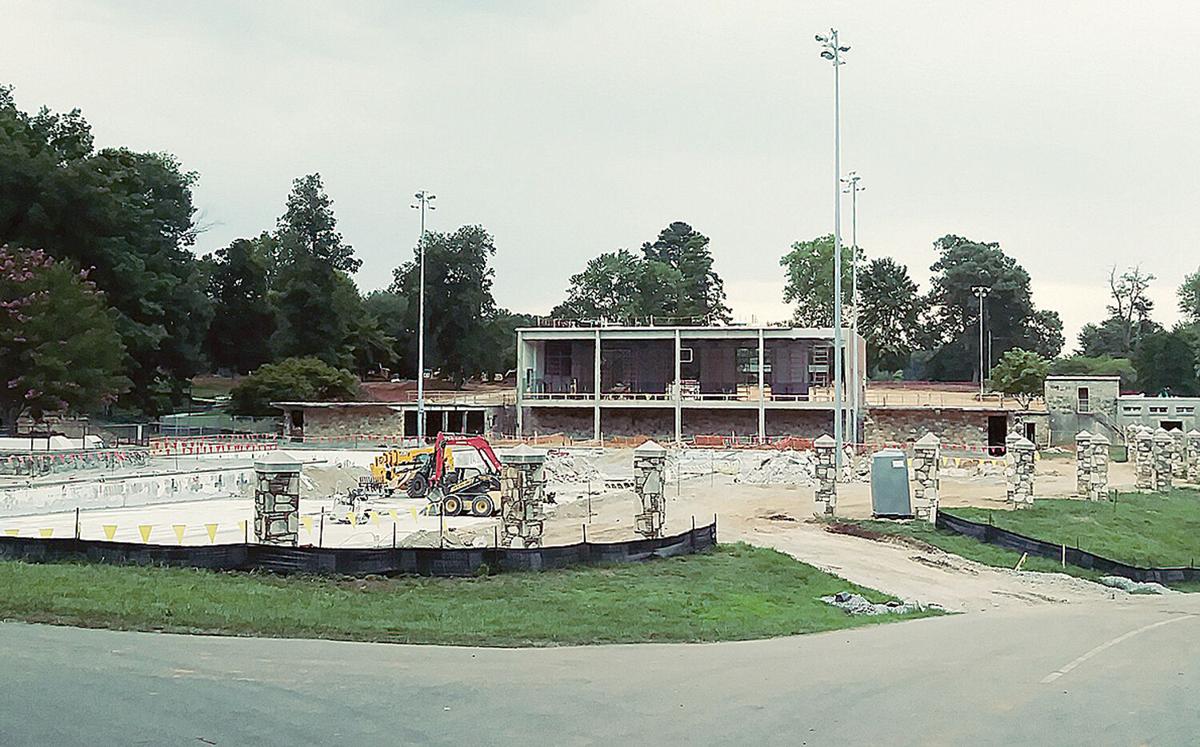 Samet Construction works to remove the West Main Street end of the old pool in August. 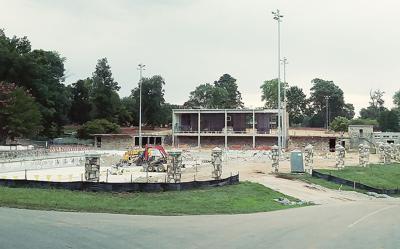 It’s been two summers since residents of Jamestown and High Point have been able to enjoy a popular pastime – swimming in High Point City Lake Pool.

But by Memorial Day May 2022, all that will change as the pool is scheduled to re-open with new and improved features.

“The age of the pool and deferred maintenance necessitated the renovations,” said Lee Tillery, High Point Parks and Recreation director. “The pool liner and maintenance system are old.”

Many of the changes will not be noticed by the swimmers, such as mechanical upgrades, but the design of the pool will change. It will now be in two sections.

The section near the gym will still have the east-west 50-meter competition pool with the addition of a splash pad outside the building where there are currently swimming lanes.

The biggest change to the pool will be at the southern end near West Main Street. Samet Construction Co. has already removed that section of the pool and made it ground level, creating a “zero-barrier entrance lifestyle pool” which will include a lazy river and stand-up water slide.

The original stone shower will remain.

The gymnasium building is also undergoing major renovation as the gym goes away, transforming the building into a community center with assembly room and offices.

“There will be two multi-purpose big rooms and additional restrooms,” Tillery said.

Locker rooms will be remodeled and entrances to the locker rooms and new community center will have a major facelift.

Additional parking, including handicapped parking, will be added, taking over some of the Great Lawn event space, which will be shifted to the west, with the stage area moved away from the building.

“Parking is a huge issue,” Tillery said. “This is our most-used park.” He expects more visitors to come after renovations are completed.

The renovations to the park are separated into two phases, with the pool area being phase one. Samet began work on the project in May of this year. Since the plans for the park were approved by the High Point City Council on May 23 of this year, some changes have been made due to the rising cost of materials. Thus, the planned bridge across the lake on Penny Road has been postponed. The bridge will connect to the Piedmont Environmental Center, High Point Greenway and Bicentennial Greenway as well as the proposed sidewalk along Penny Road in the plans by the Town of Jamestown.

The City Lake Park Renovation project plan can be found at www.highpointnc.gov.2483/High-Point-City-Lake-Park-Construction. MacAdams Company prepared the document. MacAdams also worked with the Town of Jamestown on the recently-approved Parks and Recreation Master Plan.

The City of High Point approved a $9.5 million bond referendum for the renovations in November 2019. When Covid-19 closed the pool in 2020, the City got to work on design plans and lining up contractors.

The park is located in High Point but actually has a Jamestown address on West Main Street, The city purchased land along both sides of West Fork Road, presumably Penny Road, and what is now East Fork Road, in the 1920s to create a city water supply reservoir. The park was constructed in 1934-35, the first major city park in the state. The pool was the largest in the Southeast. The park offered the opportunity for work for the unemployed during the Depression.

The Civil Works Administration (CWA), and later the Works Progress Administration (WPA), were part of President Franklin Roosevelt’s New Deal plan to provide work to idle laborers. More than $300,000 federal funds were given to construct the park and was completed by CWA workers.

Other park amenities, like shelters, fishing, marina and playground with rides remain open.

Celebrity friends who passed away in '21

Throughout this past year, I had the unenviable task of writing a number of columns about ce…