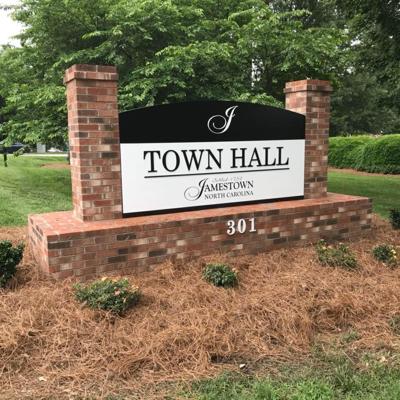 The Jamestown Town Council has been kept busy in recent weeks, with special meetings. One combined the incumbents with challengers for an information session and another, on Aug. 11, was a joint meeting with the Planning Board. Representatives from D.R. Horton, the company that purchased the Johnson property from Diamondback Investment Group in July, also attended the second meeting.

With proposed development of the Johnson property along Guilford College and Mackay Roads, Interim Town Manager David Treme thought the council and board members should be updated on some changes in the N.C. General Statutes, namely Chapter 160D. This is a new land use law consolidating city and county statutes for development regulations into a single, unified chapter.

While the new law does not make major policy changes or shifts of authority granted to local governments, it does provide many clarifying amendments and reforms that will need to be incorporated into local development regulations and how meetings should be conducted.

The three-hour meeting began with an overview of updates to conflicts of interest matters. This was presented by Vagn Hansen of Benchmark Planning, which is working on an update to the Town’s Comprehensive Plan. Chapter 160D revisions have been included in the plan.

Hansen outlined how financial and/or personal involvement in a developmental land use project could create conflicts of interest. These conflicts also apply to quasi-judicial hearings.

“[For a governing board], when making legislative decisions, you should not be participating if you have a direct, substantial and readily identifiable financial impact on the project,” Hansen said. He added that these laws also apply to Town staff.

Additionally, members of these governing bodies should recuse themselves if they had a close familial, business or other relationship to parties in the development.

Hansen posed several scenarios to the participants to gauge their reactions. Some solutions were obvious, but several stumped the Council and Planning Board.

He then outlined procedures for land use hearings, stating communication between the boards and applicants and constituents was important for understanding the situation. This is not allowed in quasi-judicial hearings.

Decisions should be made in a reasonable timeframe.

Effective Oct. 1, 2017, the state law changed regarding the adoption of “consistency statements” when amending zoning ordinances.

The Planning Board and Council both must determine if the application, whether a zoning issue or text amendment, is consistent with existing Town ordinances and the Comprehensive Plan. They must decide if the decision is reasonable, for instance, being in the public interest.

It is possible, however, to vote in favor of an application but find it is inconsistent with current ordinances. In that case, the ordinance has been amended but only applies to a geographic area and is not a precedent for future developments.

An inconsistency occurred recently when GTCC applied for rezoning for 6014 and 6016 W. Gate City Blvd. from Civic (CIV) to Conditional Zoning/Commercial (CZ-C).

While the Planning Board approved the rezoning request in May, it noted it was inconsistent with the Town’s Comprehensive Plan. Board member Cara Arena read a “motion to approve even if inconsistent” statement, noting the request meets the development needs of the community, was reasonable and is in the public interest. The Planning Board recommended the Town Council amend the Land Development Plan (Comprehensive Plan) to reflect the approved zoning amendment.

The Council approved the rezoning petition in June and submitted a statement of inconsistency.

“Boards are not required to take action that is consistent with an adopted Land Development Plan (aka – Comprehensive Plan or “Comp” Plan),” said Matthew Johnson, planning director, in June. “They only need to consider what it says.”

The joint Town Council/Planning Board meeting can be viewed at www.youtube.com/watch?v=oXNzQBuxuQ8.