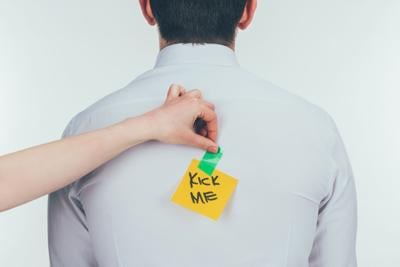 Ah, April 1, a day many people love playing pranks on others. It’s also a day the “others” avoid people.

We’re all familiar with some of the pranks that are played on April Fools’ Day, but do you know that although it has been celebrated for several centuries, no one is entirely certain of its exact origins.

“People who were slow to get the news or failed to recognize that the start of the new year had moved to Jan. 1 and continued to celebrate it during the last week of March through April 1 became the butt of jokes and hoaxes and were called ‘April fools.’”

Ancient Romans celebrated Hilaria (Latin for joyful) at the end of March. The cult of Cybele dressed in disguises and mocked fellow citizens and magistrates. Hilaria has been inspired by the Eqyptian legend of Isis, Osiris and Seth.

Most likely April Fools’ Day began as a celebration of the coming of spring and the vernal equinox. After being shut up inside for several months, people wanted to get outside and enjoy sunshine and warmer temperatures. Imagine people sitting out in parks or tossing Frisbees to dogs.

Mother Nature could be considered the first April Fools’ prankster. But the weather is not always conducive to being outside, thanks to Mother Nature’s tricks of unpredictability.

The Museum of Hoaxes (a real website) states, “It’s more likely that April Fools’ Day resembles these other celebrations because they’re all manifestations of a deeper pattern of folk behavior — an instinct to respond to the arrival of spring with festive mischief and symbolic misrule.”

Some countries require pranking to end at noon. Anyone playing a prank after noon would become an April fool.

It is not just the average person who plays tricks on April 1. One of the most successful April Fools pranks was played on the people of Sweden in 1957 by the BBC. The broadcaster reported that Swiss farmers were experiencing a record spaghetti crop and showed footage of people harvesting noodles from trees. (Editor’s note: Spaghetti does not grow on trees.) In 1980, the BBC went a step further by announcing Big Ben’s clock face was going digital and whoever got in touch first could win the clock hands.

Advertisers also got into the fun. In 1996, Taco Bell announced it had purchased Philadelphia’s Liberty Bell and would rename it the Taco Liberty Bell. And Burger King advertised a “left-handed Whopper” in 1998.

So, is it good for people to let off some pent-up emotions on April 1? It could be good for your health since benefits from laughter include stress relief and reducing strain on the heart.

On the other side, many people believe pranks are scary and often nasty. Some even avoid leaving home that day.

But pay attention. What you believe is an April Fools’ prank may not be a prank at all. Several major announcements made on April Fools’ Day have been misinterpreted as jokes and ignored. For UNC fans, the announcement made April 1, 2021, that basketball coach Roy Williams was retiring turned out to be true.

In Ukraine this year, it is not all fun and games

Apparently one country celebrates April Fools’ Day as an official public holiday, but this year, may be different.

April 1 is observed in Ukraine. It is also known as Humor Day or Day of Laughter. The country is not laughing right now, but a day of humor might just be something that is needed.

Odessa, a major seaport on the Black Sea, traditionally hosts “Yumorina,” (“Humorina” in Russian) a festival featuring parades, outdoor performances and other forms of entertainment by clowns and others. Wikipedia notes the first slogan of the event was “Odessans of all countries — unite!”

Background on www.timeanddate.com indicates Odessa has been the “capital of humor” since the early 1970s.

In 2013 the New York Times wrote, “Humorina was born of an act of censorship; in 1972, Soviet authorities decided to take a televised improvisational comedy competition off the air. A team of comics from Odessa had been winning, and local Communist officials, chagrined by the cancellation, supported their proposal to hold a festival.”

The festival was canceled in 2015 due to demonstrations and civil unrest in Ukraine. There is no word on whether Odessa will continue the April Fools’ tradition this year.