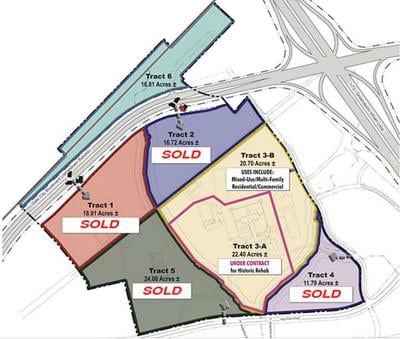 Only one Tract remains of the property that once was the headquarters of Pilot Life Insurance. Sedgefield NC LP purchased 43 acres on Tracts 1 and 5 from is KSL Sedgefield Pilot LLC, a subsidiary of Kisco Senior Living of Carlsbad, Calif., for $5.55 million. The property is at 5300 High Point Road in Greensboro. The file date with the Register of Deeds was Dec. 22.

No plans for the property have been made available.

Berkley Hall, of Greensboro, is currently constructing the 248-unit, two-story retirement apartment complex, the Retreat at Sedgefield, on 16.8 acres of the campus on Tract 2. The site is on the backside of the property and can be seen from West Gate City Boulevard. It is also at the dead end of Alamance Road, off High Point Road.

Resort Lifestyle Communities plans a 140-unit senior living community on what is known as Tract 4 at the corner of High Point and Alamance roads, across from Sedgefield.

The Guilford County Historic Preservation Commission approved the landmark designation earlier this year. It is believed that Sedgefield NC LP is waiting until the National Register nomination is approved by the National Park Service before the company goes before the Greensboro City Council for approval.

Kisco’s plan from the beginning had been to preserve the historic buildings that were the home of Pilot Life Insurance. The company was begun in 1924 by Alexander W. McAlister, a principal in the original Sedgefield Country Club development. The main building’s cornerstone bears the date of 1927. Pilot Life merged with Jefferson Standard Life Insurance in 1987 to become Jefferson-Pilot Life and moved to downtown Greensboro in 1990. Jefferson-Pilot became Lincoln Financial Group after a merger in 2006.

Kisco started the process in 2008 of placing the buildings on the National Register of Historic Places. It was put on a study list at the time, but a recent search did not indicate the buildings had made the list.

The remaining unsold tract not under contract, 3-B, is 22.7 acres and runs along Alamance Road.

Kisco Senior Living of Carlsbad, Cal., purchased the Pilot Life Insurance property in 2008 with the plan to construct a senior living facility. Plans changed after the recession, however, and the company decided to subdivide the land and sell tracts to other interested parties.

The company received zoning from Greensboro for a Planned Unit Development (PUD), mixed-use category that sets conditions such as limits on building heights that will ensure future development complements the Sedgeﬁeld area’s attractive design.

Many residents of Sedgefield were not happy when they learned of the plans in 2018 for development and attended the Oct. 12 Greensboro Zoning Commission meeting that year to voice their disapproval. However, the Zoning Commission granted Kisco and Cameron General Contractor’s request to rezone Tract 4 at the corner of High Point and Alamance roads, but added several conditions requested by the Sedgefield group, namely that a senior-living community for people 55 and older be constructed on the site, along with some architectural conditions.

While the Sedgefield residents could live with that verdict, they were not happy with the height of the buildings on the site and were still concerned about the overall planned development for the Pilot Life property. The residents were concerned the development would impact the environment, traffic and schools, which are already at- or over-capacity.