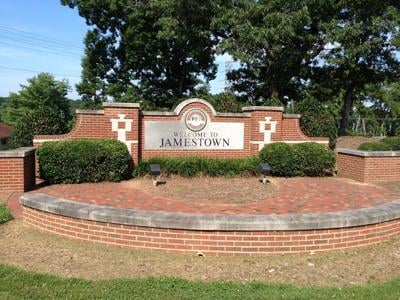 Although it was on the agenda, there was no vote by the Jamestown Town Council on Nov. 16 regarding D.R. Horton’s request for annexation of the property known locally as the Johnson farm.

“It is not ripe for discussion,” Planning Director Matthew Johnson told the Council before asking that the public hearing be continued. The reason is that the potential rezoning of that property has not come before the Council.

“As a landowner, you have a lot riding on it and you don’t want annexation to occur [first],” Johnson told the Jamestown News the following morning.

The Planning Board approved rezoning from Agricultural (AG) to Planned Unit Development (PUD) for the property Nov. 8. D.R. Horton, the current owner, asked for a development agreement before any work begins, including annexation. (See Jamestown News, Nov. 17, “Board approves rezoning to PUD”.)

Johnson said crafting a development agreement is a tremendous amount of work, involving not only the Town of Jamestown staff, but also D.R. Horton representatives, Jamestown’s Land Use Attorney Tom Terrell, Town Attorney Beth Koonce and others. It could take several months. With the holidays fast approaching and people out of town, Johnson does not believe this is a good time to present the rezoning issue to the Council.

“We will work together to make sure Jamestown gets the best we can,” Johnson said.

Interim Town Manager Dave Treme told the Planning Board, “We tell the developer what we want.”

Several people spoke during the public hearing, but the annexation petition was continued until the Dec. 21 Town Council meeting. Johnson does not believe it will be heard then either and it could be January before the matter goes before the Council again.

– With minor changes, the Council unanimously approved a new public records request policy. Treme presented a draft in September, which has been approved by the Institute of Government and the Town attorney.

An unprecedented number of public records requests have been submitted to Town staff in recent months, most related to the former Johnson Farm property. These requests have taken much of the staff’s time. While most requests have been completed, there is still a backlog and Treme announced the Town would rent software for 30 days to finish up the requests.

– Bob Gerken, local AARP Representative, presented the AARP Network of Age-Friendly States and Communities certificate to Councilmember Rebecca Rayborn, signifying Jamestown is a member. The Town became the 585th such community to enroll in the program. Rayborn leads the AARP Livable Communities Committee.

The AARP age-friendly network encourages states, counties, cities, towns and rural areas to prepare for the rapid aging of our nation’s population. The network encourages elected officials and local leaders to focus on and strengthen the features and services that help to make communities livable for residents of all ages, from the cradle through retirement.

The next step is to plan programs and events for the network. Through the age-friendly program, AARP helps participating communities to become more livable and age-friendly by creating safer and more walkable streets, needed housing and transportation options, better access to key services, and opportunities for residents to participate in community activities.

– Treme recognized several new hires in the town as well as Capt. Brian Hall, the new head of the Guilford County Sheriff’s Office in Jamestown.

The meeting may be viewed at www.youtube.com/watch?v=rkK4K0-YpUo.

Off-year elections are not usually ripe with drama, but 2022 is already proving the exceptio…