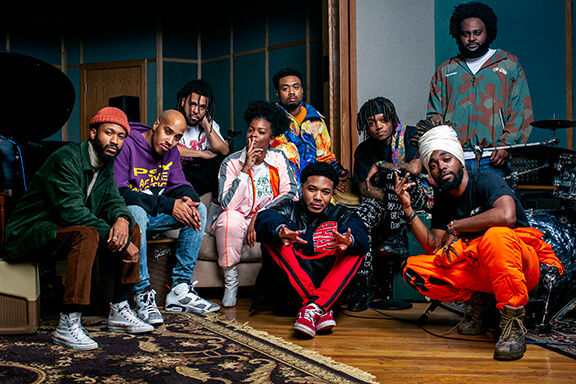 North Carolina-raised, Grammy Award-nominated and multi-platinum hip-hop artist J. Cole is proud to announce that his second annual Dreamville Festival will be returning to the historic Dorothea Dix Park Park in Raleigh, NC, Sat., April 4. Limited specially priced tickets to the music festival are available now by signing up for the presale code at www.DreamvilleFest.com. General tickets go on sale tomorrow, Wed., Dec. 11 at noon ET.

The event, produced in partnership with Dreamville Records and ScoreMore Shows, will once again provide a large-scale, multi-stage music festival from Cole, who was raised in nearby Fayetteville, North Carolina. The festival offers Cole a unique opportunity to give back to his home state that helped shape him into the successful and creative artist he is today.

Dreamville Festival will offer attendees a lineup of music artists personally selected by J. Cole, combining some of the biggest names in music with exciting up-and-comers from across the country. The full lineup is set to be revealed in early 2020.

The festival is announcing its return to Raleigh just off the heels of Dreamville Records’ platinum-selling compilation album, Revenge of the Dreamers III, being nominated for Best Rap Album at the 2020 Grammy Awards. Two other nominations received in support of the collaborative project include Best Rap Performance for “Middle Child” by Cole himself and “Down Bad” from Cole, J.I.D, Bas, EarthGang, and Young Nudy. Cole is also nominated for Best Rap Song for his contribution to 21 Savage’s “A Lot” as well as for Best Rap/Sung Collaboration in support of Young Thug’s “The London,” featuring himself and Travis Scott.

“On behalf of the Dreamville team, we couldn’t be more proud to announce the festival’s return to Raleigh and the beautiful state of North Carolina. Being able to experience firsthand the positive and substantial impact that this festival made in the local community was a humbling experience and something I hope we can continue to build upon for years to come,” said Ibrahim “IB” Hamad, President of Dreamville Records and J. Cole’s manager.

“We, just like our fans, are eager to get Year 2 underway. I look forward to seeing our Dreamville family come out and enjoy the fest again this April,” said Adam Rodney, Creative Director for Dreamville Records.

Early-bird GA (starting at $79) and VIP (starting at $229) passes are available for purchase now by signing up for the ticket presale at www.DreamvilleFest.com. The festival will begin general ticket sales tomorrow, Wed., Dec. 11, through the festival website.

Various VIP Packages this year include JV VIP ($229), Varsity VIP ($269), and MVP VIP ($399), with perks including premium viewing areas, expedited entry, dedicated bars and food vendors, private restroom facilities, festival merch, and more. Fans are encouraged to purchase their passes now as last year’s event sold out in advance, and ticket prices will continue to rise as the festival approaches.

Founded by North Carolina’s own Grammy-nominated artist/producer J.Cole in 2007, Dreamville is a critically acclaimed and commercially successful record label that is distributed in partnership with Interscope Records. The label is currently home to a variety of both established and up-and-coming music acts, including Bas, Cozz, Ari Lennox, J.I.D, Lute, Omen, and EarthGang, in addition to J. Cole himself.

Texas-based ScoreMore Shows has once again partnered with J. Cole to help produce the second annual event. ScoreMore Shows, now an independent division of Live Nation, is one of the largest promoters and festival producers in the country. ScoreMore’s ties to J. Cole and his team are long-standing as this relationship began with J. Cole’s first-ever tour stops in Texas in 2010 that ScoreMore helped book and promote.

Last year, the festival event played host to a massive celebration of local culture, music, food, and art, welcoming over 40,000 guests from across the globe, including attendees hailing from all 50 states and more than 10 international countries. Notable performances featured a headlining performance from Cole and several special guests to close-out the inaugural event,including: SZA,  Big Sean, 21 Savage, 6LACK, Nelly, Teyana Taylor, Rapsody, and Mez, as well as the entire Dreamville Records roster that included Bas, Cozz, Ari Lennox, J.I.D, Lute, Omen, and EarthGang.

Details surrounding the full music lineup, performance schedule, and other experiential details for Dreamville Festival 2020 will be announced in the coming weeks. Be sure to visit the following channels for more information and to stay up to date on all Dreamville Festival news and announcements:

Established by Jermaine Cole, better known as J. Cole, the Grammy Award-nominated artist and producer. With a growing roster of talent, the label is home to artists including Bas, J.I.D, Cozz, Omen, EarthGang, Ari Lennox, and Lute. Visit Dreamville.com for more information.

ScoreMore Shows is a Texas-based music promoter and event production company founded in 2009. Over the past decade, ScoreMore has solidified itself as a tastemaker in music and culture, while also becoming the premier millennial-facing festival producer in the country. With a history of booking artists early in their careers in small clubs who have gone on to headline arenas and amphitheaters, ScoreMore has become a trusted curator in the live music scene. ScoreMore regularly routes national tours throughout the United States with a focus on the Southwest region, promoting more than 200 club shows per year with past notable performers including J. Cole, Kendrick Lamar, Travis Scott, Chance the Rapper, The Weeknd, Frank Ocean, Tyler, The Creator, and Wiz Khalifa, among countless others.

ScoreMore also oversees a growing roster of successful festival properties across Texas including Mala Luna Music Festival and its partnership in Neon Desert Music Festival, as well as JMBLYA in both Texas and Arkansas. For more information, visit www.scoremoreshows.com.