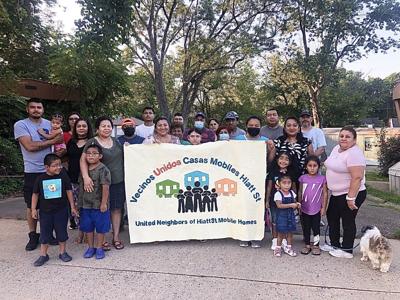 Immigrant families facing eviction from the mobile home park they’ve lived in for 25 years are appealing to the developer negotiating to buy it.

On July 12, Lynne Anderson of Family Properties informed her tenants in Jamison Homes Mobile Park on Greensboro’s Hiatt Street the property was sold, and they had until the end of September to get out.

Despite those statements, the sale to Owls Roost Partners was not finalized, and NC General Statute North Carolina General Statute § 42-14.3 requires that residents of five or more mobile homes on property being converted to another use must be given 180 days, which in this case means the tenants have until Jan. 28.

According to a News & Record article by Nancy McLaughlin, “Anderson said her aunt, who died recently, stipulated in her will that the property be sold and the proceeds divided among her grandchildren.”

Anderson’s aunt, Shirley Todd Jamison, died in March 2017, with no heirs. Anderson did not respond directly to YES! Weekly’s questions about this apparent discrepancy, but after repeated inquiries, Anderson’s sister Becky O’Hare sent a brief email stating that the heirs are Jamison’s grand nieces and nephews. O’Hare did not clarify whether Anderson had misspoken or been misquoted. Neither Anderson nor O’Hare has responded to questions about whether those heirs include their children, nor have they provided documentation of the actual terms of the will.

In September, multiple residents of the property told YES! Weekly that Anderson sold them the trailers they had previously leased, in some cases only months before telling them they had to move. They said they had spent their savings purchasing and remodeling their mobile homes and had no money to move.

On Sept. 21, Siembra NC announced that Anderson had refused to meet with tenants to discuss their proposal to sell the property to them rather than to Owls Roost Partners, so they are appealing to Jerry Wass, developer and CEO of Owls Roost.

Wass’s LinkedIn profile lists him as the founder and CEO of AnomalySquared.com. Both Owls Roost Partners and Anomaly Squared are located at 7900 McCloud Rd #400 in Greensboro. On Sept. 22 and 23, Siembra NC and United Neighbors of Hiatt Mobile Homes organized a social media campaign asking their supporters to call Wass at (336) 215-9488 and request that he cease negotiating with Family Properties. The provided script included the statement “These families have lived on the property for many years (some of them for over 20 years) and deserve to have a chance to buy the land they have lived on.”

Since Sept 22, calls to Wass’s phone number have gone straight to voicemail, with a message that the mailbox is full.

On Sept. 22, Kelly Morales of Siembra NC told YES! Weekly “It’s been about two and a half weeks since Hiatt Neighbors delivered a letter to Jerry Wass, CEO of Owl’s Roost.

Then last week, Lindley Neighborhood Association also wrote a supporting letter to Mr. Wass, stating that they are standing with the Hiatt Neighbors. Neither Hiatt Neighbors nor the Lindley Park Neighborhood Association has heard back from anyone at Owl’s Roost. That is why the community has been asking their supporters to call and text Mr. Wass, in order to show him that the Hiatt neighbors have broad-based support across the community. So, that’s where we’re at. I think these are literal wake-up calls for him to do the right thing. The neighbors will continue organizing if he does not respond.”

The Lindley Park Neighborhood represents both homeowners and renters who live within Lindley Park - bounded roughly by Oakland St. to the South, W. Market St. to the North, Josephine Boyd Blvd. to the East and Holden Rd. to the West.

We are a neighborhood that values its diversity and all residents who call this place home. Some of our neighbors have led efforts over the past several years to bring together and support all the different segments of the community through initiatives like Knit the Bridge in 2016, community building days at the Corner Market and the Corner Market’s SNAP benefits program.

Now some of our Lindley Park neighbors who live in the trailer park on Hiatt St., most of whom are Latino, are facing the threat of being displaced because the current owner seems to want to sell the land. Many of these Hiatt St. trailer park residents have lived in the Lindley Park neighborhood for decades. The children who live there have attended Lindley Elementary, Kiser Middle School, and Grimsley High School, and their tight-knit and mutually supportive community is what has gotten them through hard times. They have formed their own residents’ association, and they are asking the current owner to sell the land to them, rather than to the developer she is in conversation with.

We appreciate these neighbors as part of our broader Lindley Park neighborhood, and we support their right to advocate for themselves. We urge the developer, Owl’s Roost Partners, to listen to these members of our community, and work with them to come to a resolution. As a neighborhood association, we want to support our neighbors to pursue the best possible outcome for themselves and their families. We hope for a fair and equitable process that treats these neighbors with dignity and respect, and we hope the current owner will give fair and due consideration to these residents as potential buyers.

As a neighborhood association, we love where we live and understand why our Hiatt neighbors want to stay in our beloved community. We support all those who call this neighborhood home, and we are hoping for a positive resolution and a great outcome for our neighbors in the trailer park on Hiatt St.