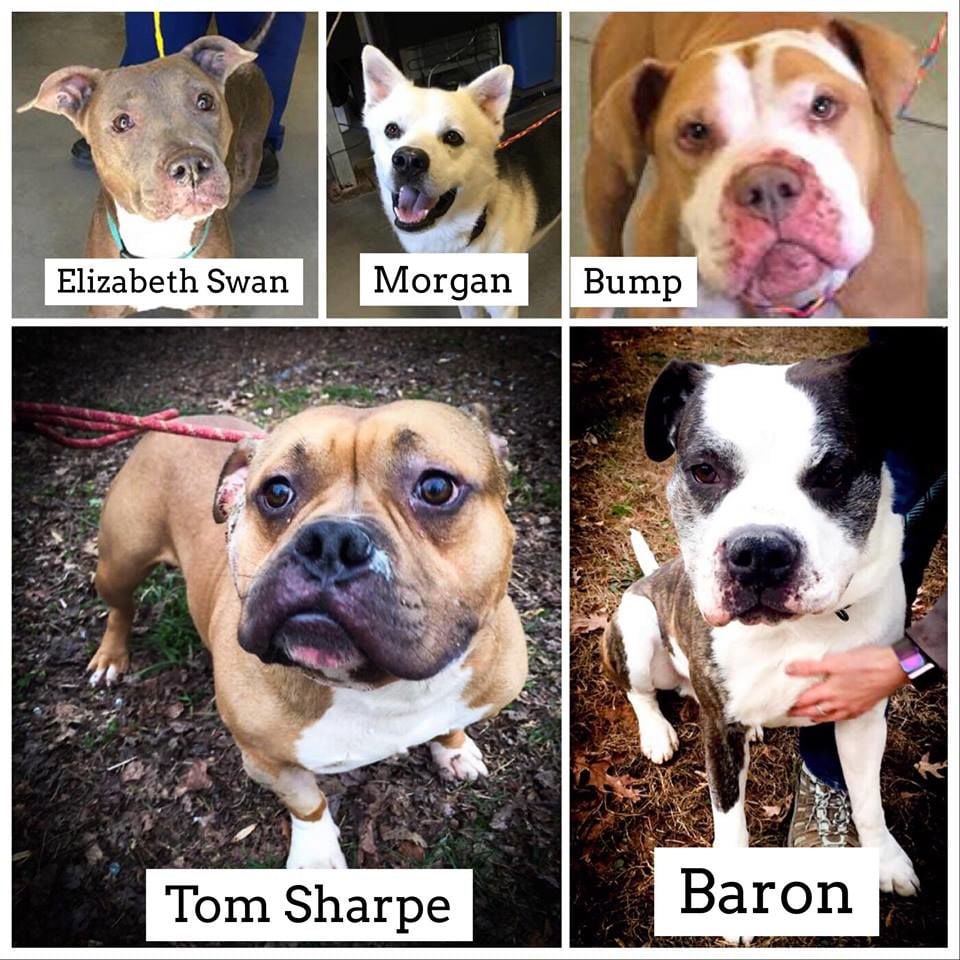 “The Guilford County Animal shelter is euthanizing a bunch of adoptable dogs tomorrow because they supposedly do not have enough indoor space for them because of the cold weather this upcoming weekend. The capacity of the shelter use to be much higher.”

In a Facebook message, Mashburn stated that she had received this information from two separate staff members at the shelter, whom she said: “are not allowed to speak on behalf of the shelter about euthanasia due to documents they sign to work there.” She recommended I contact shelter director Jorge Ortega.

I phoned Ortega at 8:30 a.m. this morning. He is out of town and expressed unfamiliarity with the social media posts or any critical situation involving dogs facing euthanasia today, but said that he would attempt to have a senior staff member contact me by my deadline. (As of noon today, that had not happened, but this article will be updated if it does.)

A shelter volunteer, who asked for their name not be published, told me only dogs in isolation are in immediate jeopardy, with health or temperament problems keeping the former in the back building of the shelter, which is mostly exposed to the elements, as opposed to the dogs on the adoption floor. “I’m unaware of general space issues, but they do happen in ISO, so it makes sense that cold weather would affect that, as they can’t be put with the general population.”

The Guilford County Animal Shelter placement coordinator Christi Florio Isley told me in a Facebook message this morning that the “only one with a deadline of today is Tom Sharpe [dog’s name], due to isolation space.”

Tom Sharpe is described in public Facebook posts by Isley as an “adorable” 50-lb., 3-year-old male American Bulldog/Chinese Shar-Pei mix who arrived at the shelter on Jan. 5 and faces possible euthanization today due to the cold weather. (As of 1:13 p.m. today, Isley noted on her Facebook page that Tom Sharpe was adopted this morning by Dune Dawgs Rescue, Inc.)

Isley wrote that “ISO is out of space” in a public post last night about the dog, indicating that there was no more room for dogs in isolation that would allow them to be moved inside. The volunteer I spoke to emphasized that this is an issue for dogs in isolation at the shelter, not the general population, “despite rumors you have heard on social media about empty kennels.” The volunteer was not referring to Mashburn’s Facebook post, but claims made by another person who frequently posts about this issue, and whose posts they described as often inaccurate.

Public posts by shelter staff describe the dog Tom Sharpe as being in isolation for an upper respiratory infection, not behavioral issues. A post by Isley described his situation as “URGENT” and stated “Email rescue@guilfordcountync.gov or call 336-641-3400 for information!” The volunteer described him as “an utter delight” and very friendly with both people and other dogs.

Isley wrote that eight dogs are on the urgent list, but only Tom Sharpe was scheduled to be euthanized today. Questions as to when the other seven dogs might be euthanized and whether they are, like Tom Sharpe, in isolation, were not answered by her as of our deadline time. She stressed that “this is a community problem, not a shelter problem” and that “the issue is space due to cold weather also.”

Several people involved in animal rescue, whom I spoke with, agreed with the statement that this is a community issue. Karen Stratman, the owner of Crooked Tail Cat Café, gave me the following statement:

“It’s heartbreaking to say no, but we have a community problem too, there’s simply not enough boots on the ground. People are adsorbed with making posts online about animals in need, but if they would sign up to foster for a rescue organization, the amount of animals saved would be exponential. If you can’t foster then consider supporting in other ways.”

Stratman also referred to the negative publicity that the animal shelter received in 2017, after its former director Marsha Williams pleaded guilty to multiple counts of animal cruelty.

“Sure, years and years of damage has been done at GCAS, but Jorge has only been in his new position for a year. It’s going to take much longer than a single year to undo all the previous damage, and it will probably never be perfect. I’ve met Jorge on several occasions at community cat meetings. He wants to do everything he can, but he’s also limited by regulations. So instead of wondering what the shelter is doing wrong, perhaps consider volunteering and asking them how you can make it better and make a difference. Go out and find a rescue organization to foster for. Believe me, once you get used to saying goodbye, it is one of the most fulfilling things you can possibly do as an animal lover. Not only are you saving an innocent life, you are also giving someone a companion to love and cherish.”

Some people who run or work with rescue organizations seemed more willing to give me a public statement than anyone at the animal shelter was able to do by noon today. Tammy Graves, president/founder of the Haley Graves Association NC, said she agreed with Stratman, and that she “would be shocked to think they [the shelter] are so overcrowded that animals are facing euthanasia. The population numbers are at the lowest that I have ever seen in over 20 years.”

She also stressed the need for stronger spay and neuter guidelines. “We thought we would see this with the SPOT truck, but it is not operating. Last year in Davidson County, their new program spayed and neutered over 800 animals that prevent an awful lot of animals from coming into the shelter. The goal should be to stop pet overpopulation and have low-cost programs that go into the community. We have the resources; they need to be utilized.”

“I personally feel that the shelter was best operated under the leadership of Dr. Karla Brestle, which was probably 20 years ago. Being a veterinarian and being female seemed to be a great combination in working with the staff, the animals, the public, in addition to working with rescues. She was a visible leader at the shelter daily. She was approachable and transparent with everything. With that being said, my biggest issue with the shelter is their change in intake policy. They are receiving funding from the county, yet they are turning away Guilford County citizens every day that come through their door with an animal. They are enforcing a policy that people surrendering an animal need to make an appointment. Most of the appointments are two weeks out. So, what is happening is that more animals are being abandoned every day. In 2018, ARFP had more kittens, cats, and puppies, dumped at our front door than ever in our 27-year history.”