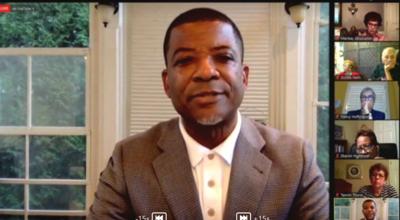 In 2017, Kennedy made headlines as the most progressive representative ever elected to Greensboro Council, as well as its first openly LGBTQ member. On Tuesday, council picked Hugh Holston for the at-large seat Kennedy vacated 28 days earlier.

Holston will resign from his position as Chair of the Planning and Zoning Commission, to replace the council member who resigned her position last month. Holston’s State Board of Elections record lists him as UNA, meaning unaffiliated, but shows that he voted on the Democratic ballot in all primaries going back to 2004. It also shows that, unlike some others who applied for the seat, he has voted in every municipal election in this decade.

As reported[IM1], Kennedy resigned on Aug. 17. Two days later, she announced that she had accepted the position of Neighborhood Development Director for the City of Greensboro.

On Aug. 19, the City posted that applications for Kennedy’s interim replacement would be accepted online through Sept. 9 and that those deemed eligible must each make a three-minute speech at the Sept. 14 meeting, after which one would be selected as interim representative at-large.

Another former council member, Mike Barber, did join the Zoom session and spoke. Barber was elected At-Large Representative in 2013 and lost that seat to Kennedy in 2017. Several speakers in the general comments portion of Tuesday night’s agenda referenced the belief that the city's gossip circle had pegged Barber as the Council's likely choice and asked council not to choose him.

It was difficult to make out Barber's three-minute Zoom speech about why he should be Kennedy’s replacement, due to technical issues. The majority of his speech was incomprehensible on both the Spectrum TV 13 broadcast and the city’s livestream.

The speeches of the other candidates benefited from better audio, with activist and frequent council critic Hester Petty having the clearest. Petty stated she was only applying to be Kennedy’s interim replacement, and that she would not run for a council seat in 2022. She asked council to pick someone who would honor Kennedy’s values, as “she was elected to her at-large seat because of her progressive views, and by people who share those views.”

Petty also stated that Kennedy “wanted an open discussion about an investigation into the Greensboro police department” and that “this issue will not go away, and we need someone in her seat who will continue to fight for a police department that is accountable to the public.”

Both Rossabis are staunch defenders of the GPD in virtually all circumstances.

In her three minutes, Ms. Rossabi expressed anger at what she called council’s unfair and undemocratic selection process, and announced she was running for the at-large position in the 2022 election. Rossabi’s aggressive campaign attitude can also be seen in her Follow the Money[IM2]Campaign video.

At a previous council meeting, Mayor Vaughan and others discussed ruling candidates who have not voted in a recent municipal election ineligible to apply for Kennedys’ seat. They apparently decided against this provision, as records show that Rossabi has not voted in one since 2011.

District 2’s Goldie Wells nominated Holston. District 3’s Justin Outling seconded, and the motion passed unanimously to give Holston the position. Mayor Vaughan said that Holston would resign his position with the Planning and Zoning Commission on Monday and that Hightower would appoint his replacement.

The decision would make Holston the fifth Black member and second Black male of the current nine-person Greensboro City Council.