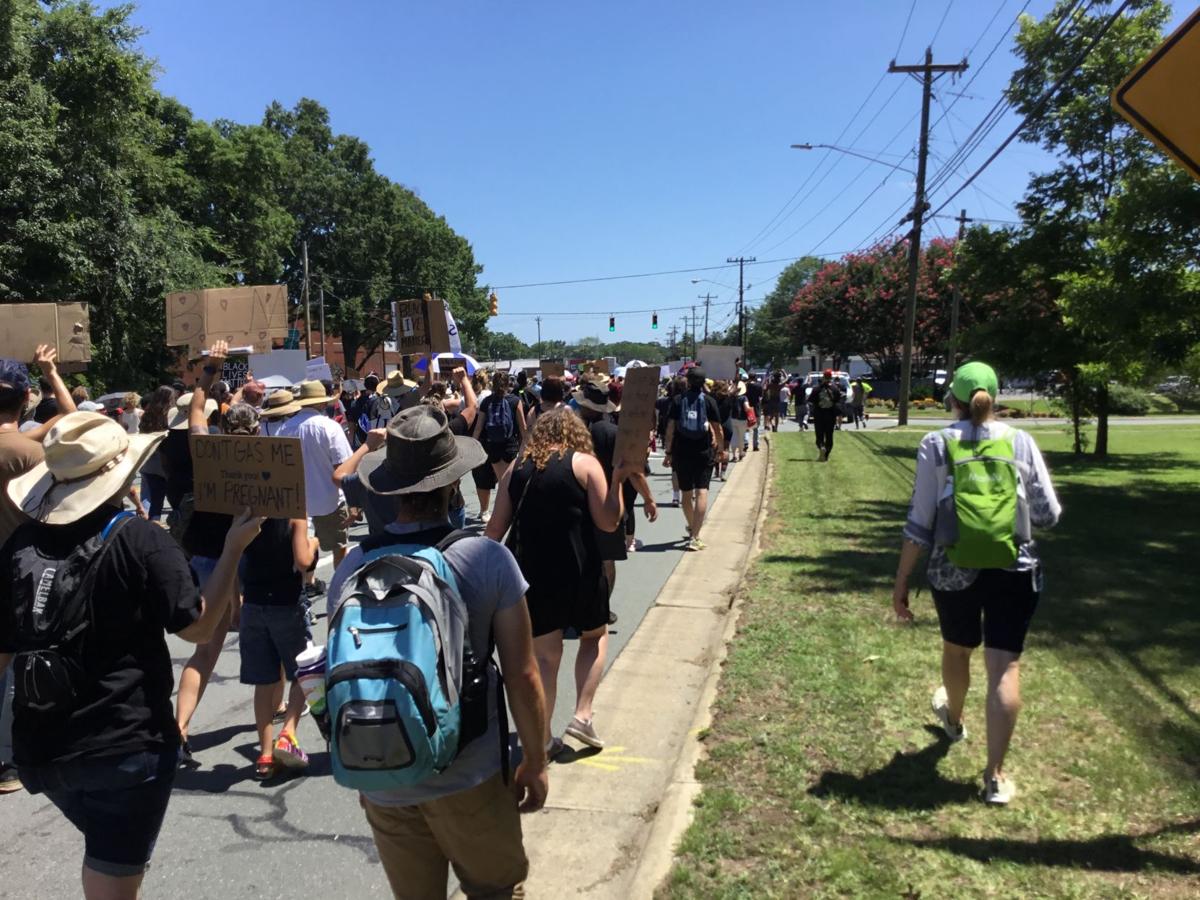 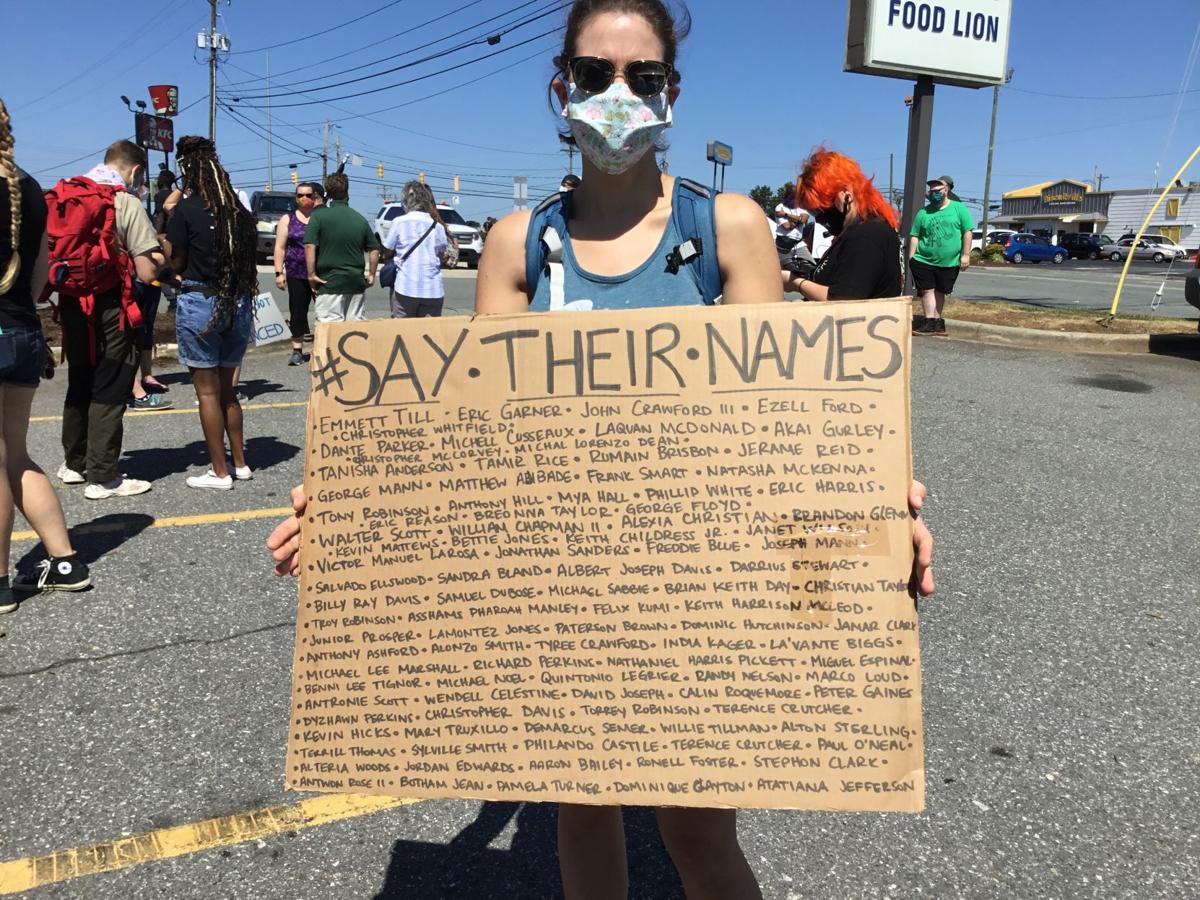 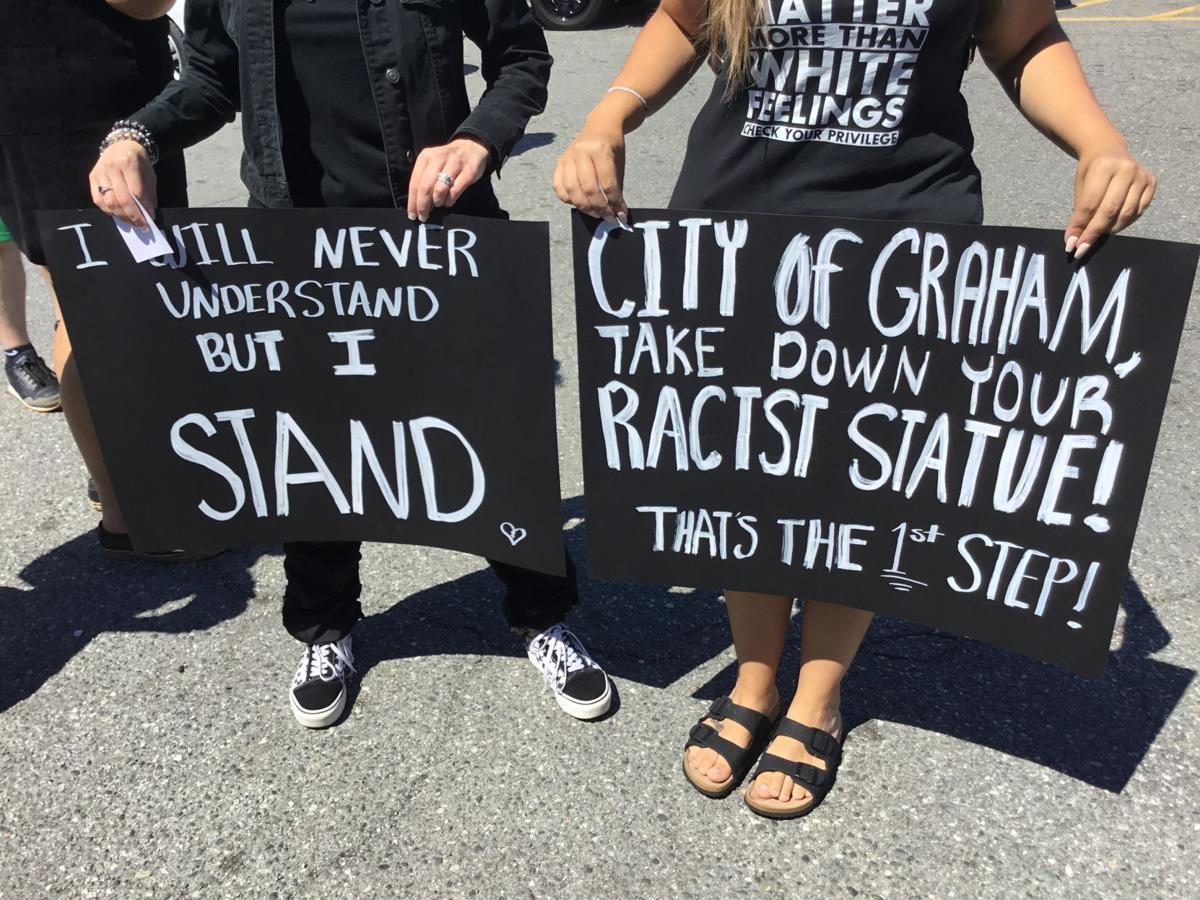 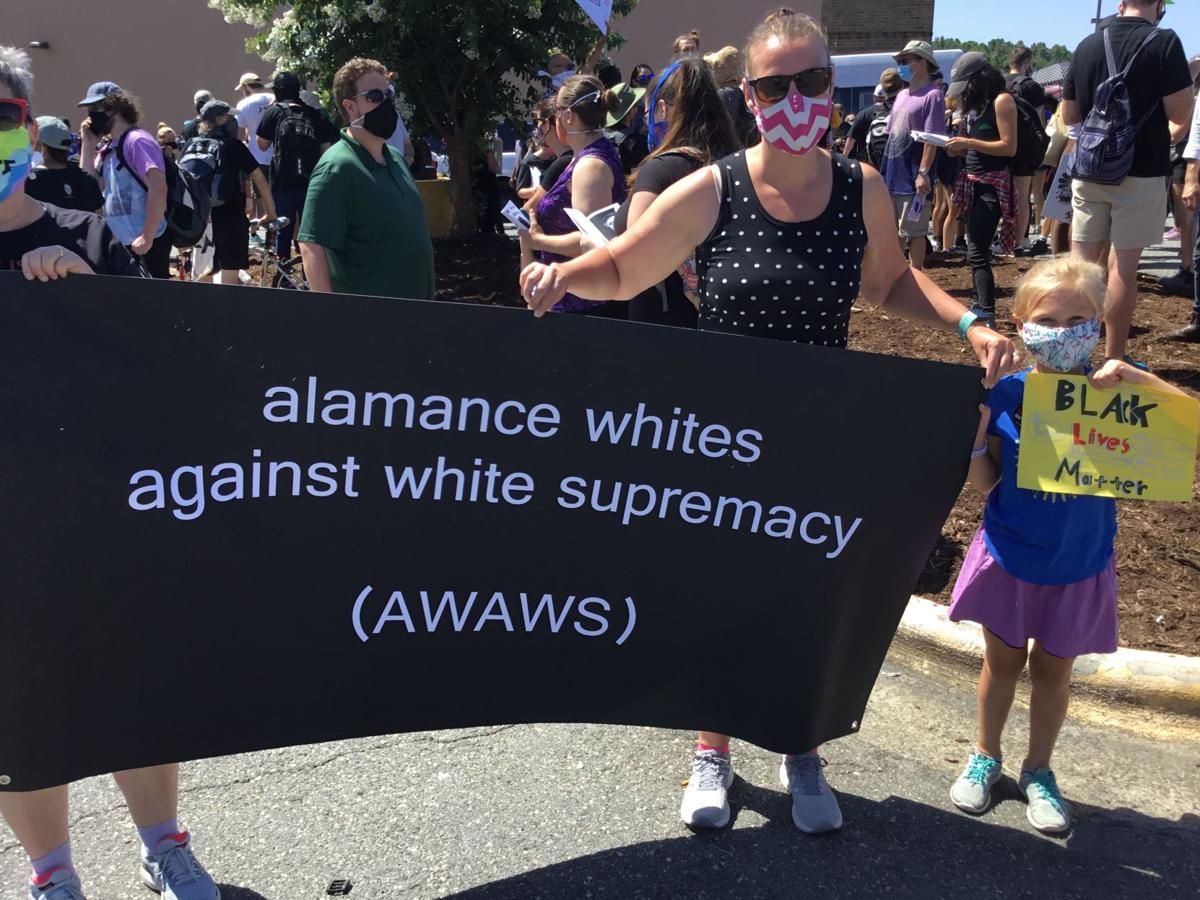 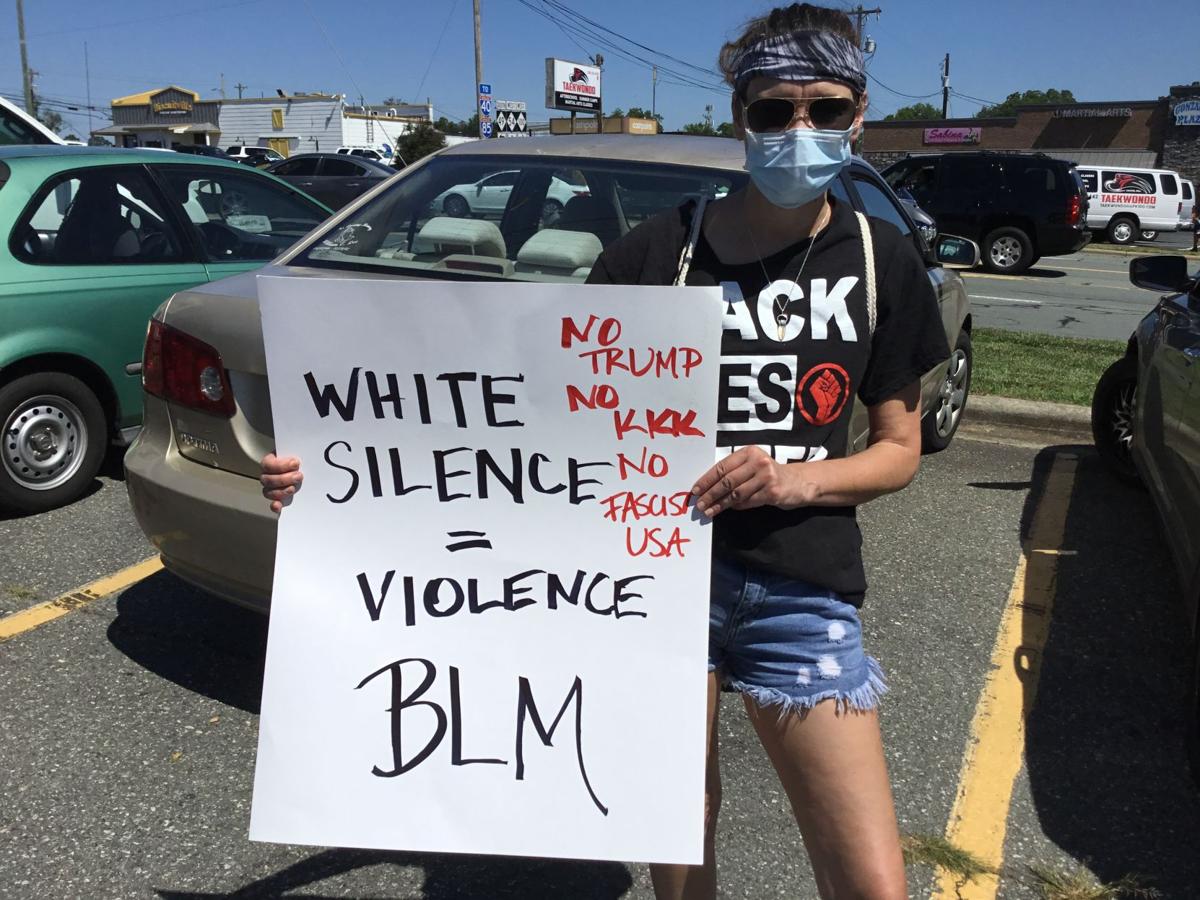 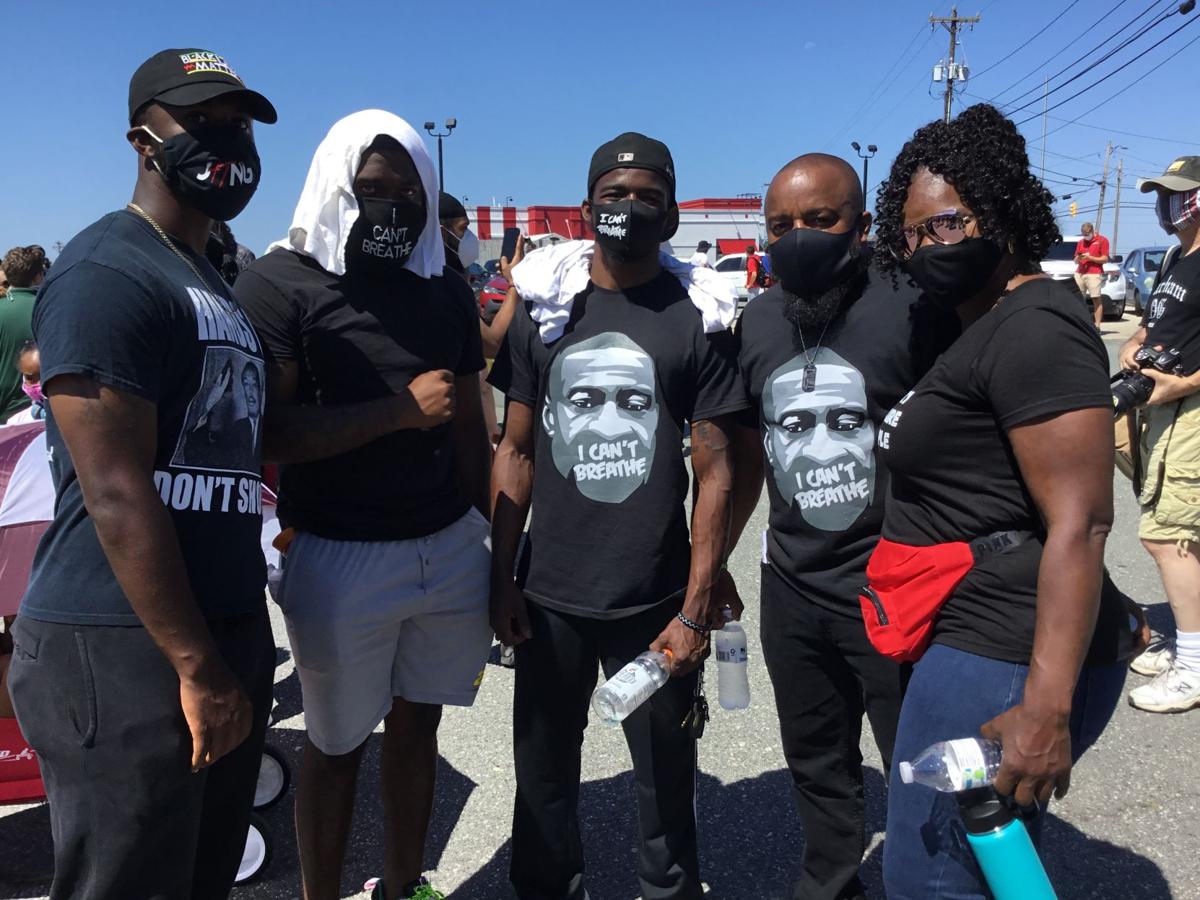 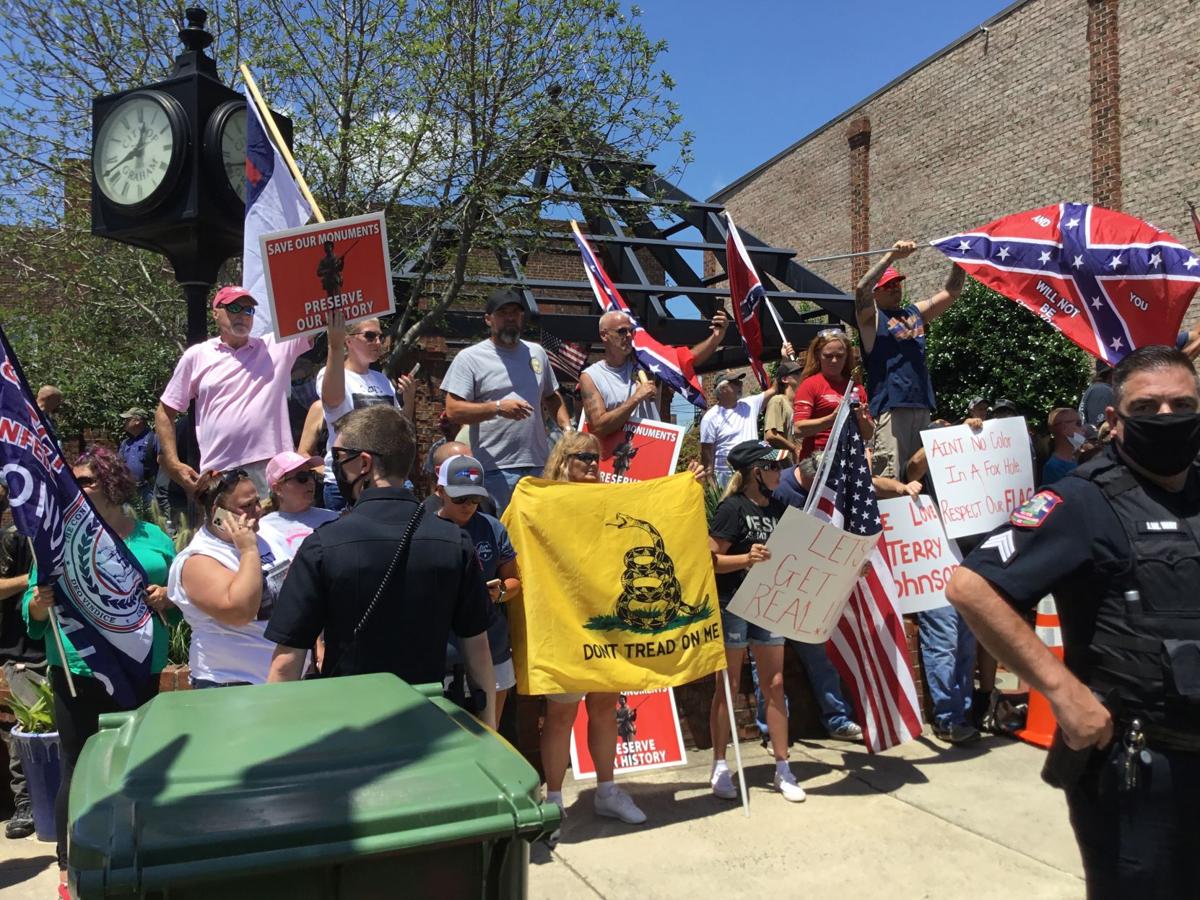 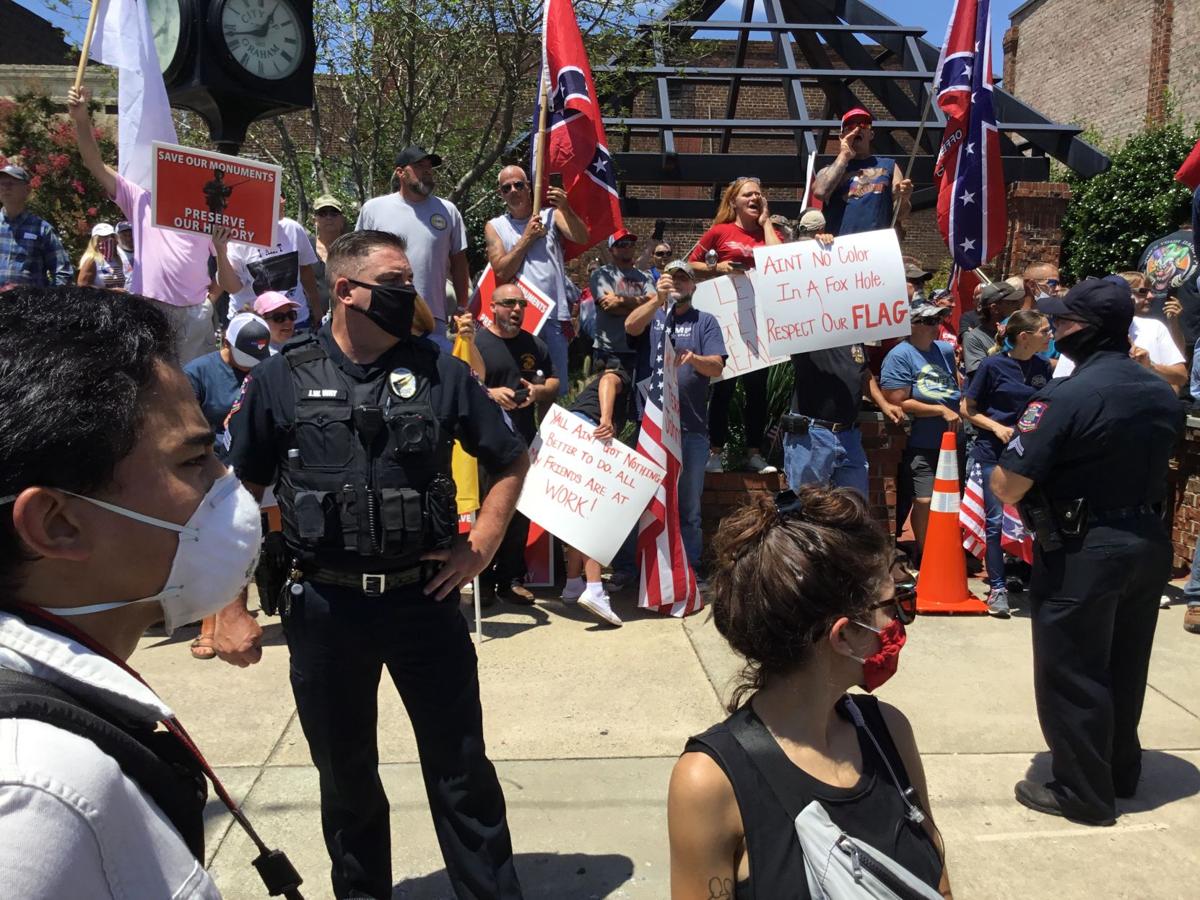 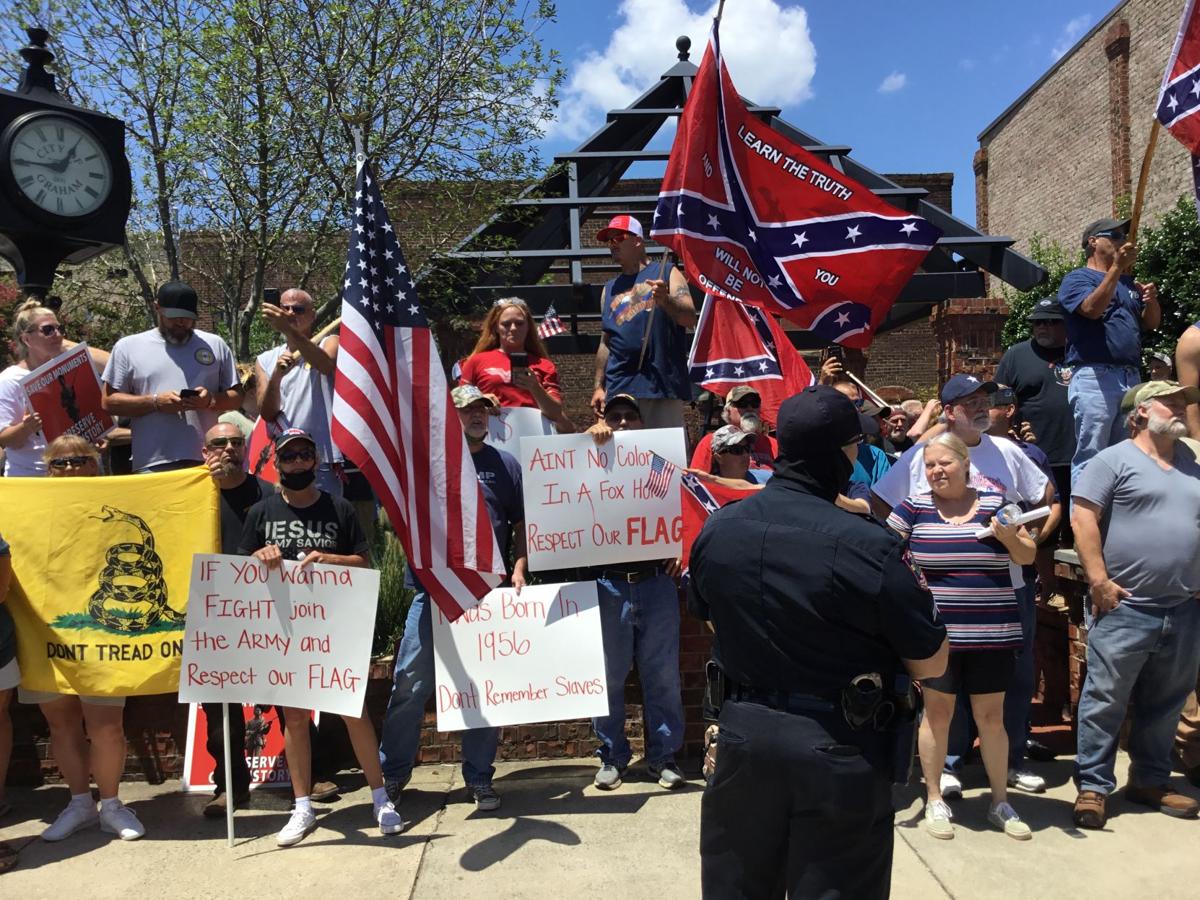 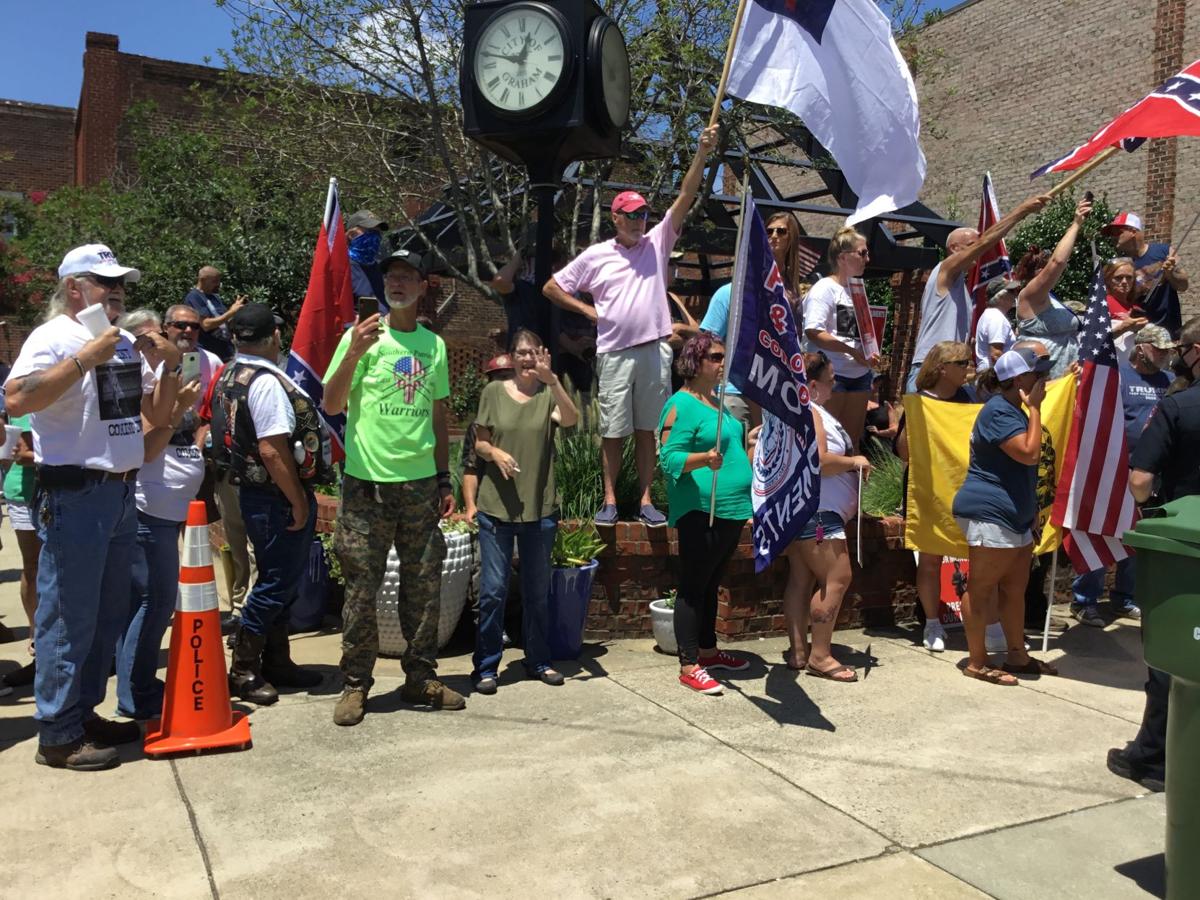 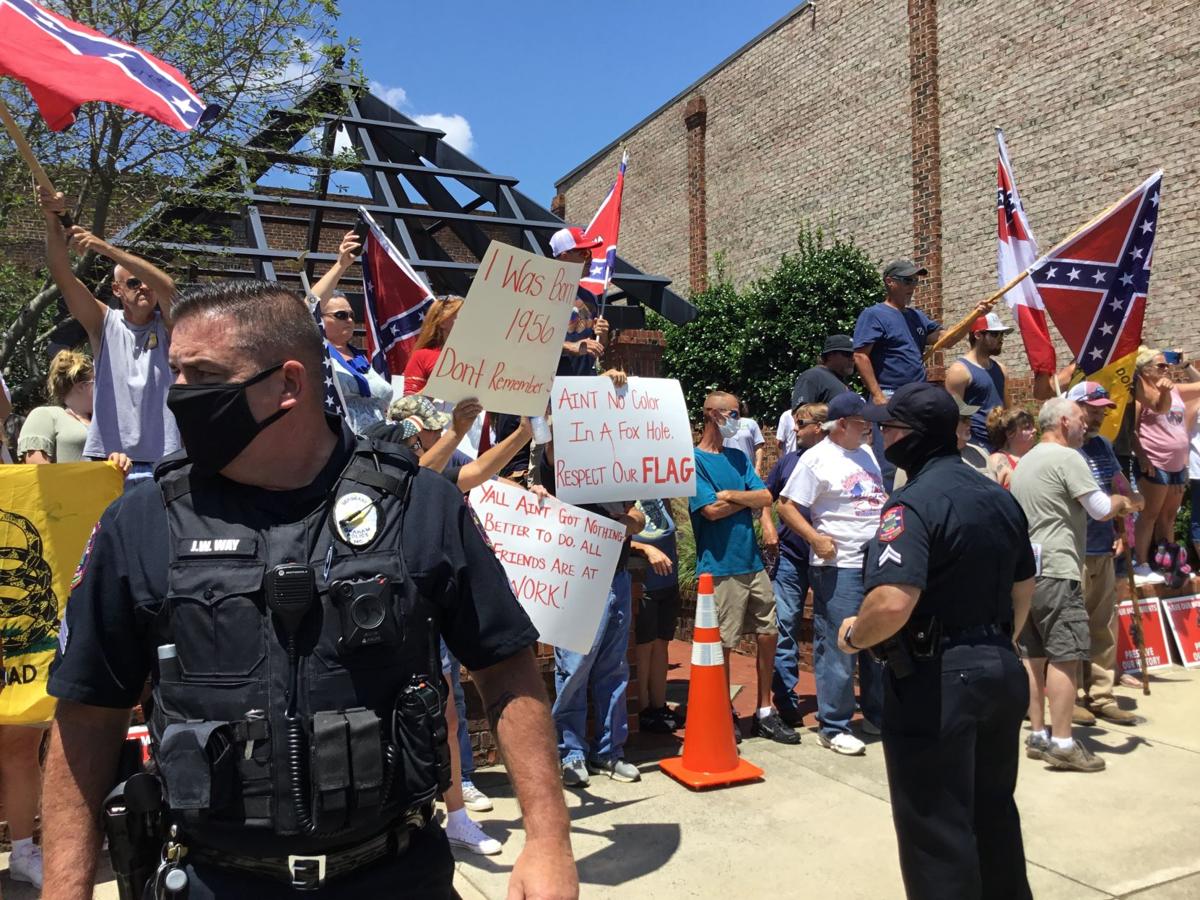 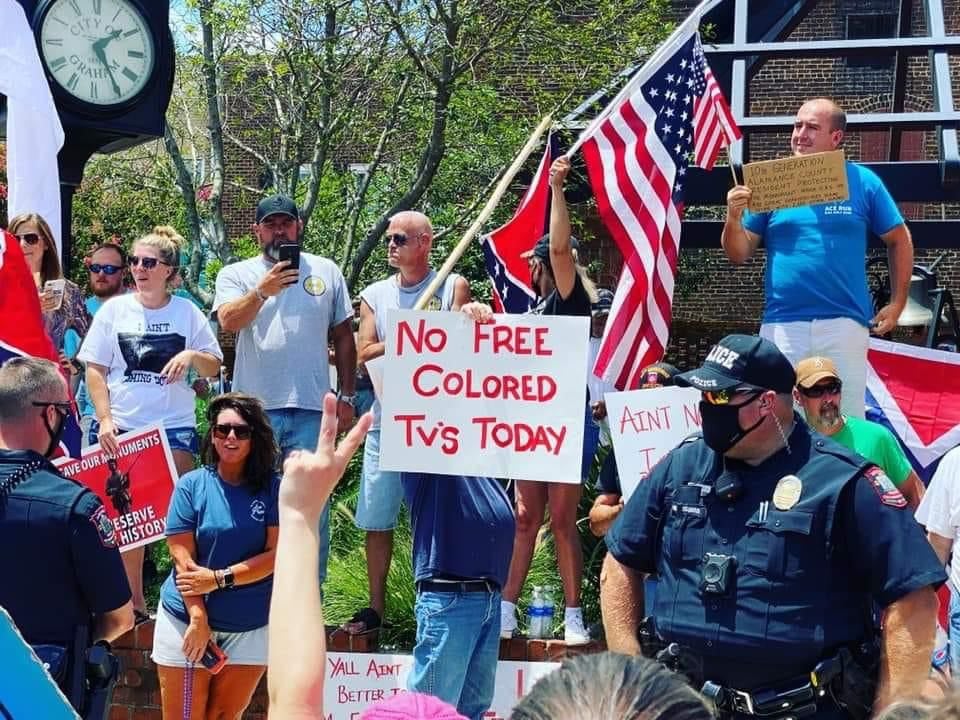 “It’s 10-to-one out here today,” said Greensboro’s Reverend Greg Drumwright to the marchers triumphantly following him and the activist known as AJ into Alamance County courthouse square on Saturday.

He was referring to the disparity between the more than 700 Black Lives Matter demonstrators, who had marched the 1.7 miles from Burlington to downtown Graham in nearly 90-degree heat; and the less than 70 neo-Confederate counter-protesters who greeted them with jeers, rebel yells, slurs and extended middle fingers.

The BLM marchers assembled around a small dais 20 yards from the Confederate monument they’d come to denounce (but not destroy). About 50 feet away, the neo-Confederates had been allowed to gather around the pyramidal framework containing the original courthouse bell.

Later, law enforcement also allegedly allowed them to ring that bell in an attempt to drown out speeches from the dais, even though the speeches were part of a permitted march. When a Black demonstrator attempted to ring it, he was personally arrested by Alamance County Sheriff Terry Johnson, who in 2014 was accused by the U.S. Justice Department of racial profiling, and whom the counter-protesters clearly considered their friend. The official reason given for the arrest was “vulgar language.”

Among those waving Gadsden and Confederate flags around the courthouse bell were Jessica Reavis, an officer of The League of the South and co-founder of United Confederates of the Carolinas and Virginia, who in 2019 was convicted of carrying a .40 caliber handgun at a neo-Confederate demonstration in Pittsboro.

Ninety minutes earlier, while Lt. Chris Smith of the Burlington police was telling the marchers “drink a lot of water, because you’ve got a long ways to go and it’s hot out there,” neo-Confederate supporter Steve Marley posted the following “A Call to Arms” to the ReOpen NC Facebook group.

“The time has come and I’m asking YOU what you do, Stand or Run? We did not to where are today by running scared. Our forefathers made an important stand against tyranny and I hope each and every one of you do. Graham needs you., and I hope to see hundreds of Patriots tomorrow making that stand.”

The dozens of “Patriots” who actually showed up included Gary Williamson, founder of Alamance County Taking Back Alamance County (ACTBAC), which the Southern Poverty Law Center has called a hate group.

As I reported in late 2016, Williamson’s small but vocal organization, which once unsuccessfully attempted to line I-40 with Confederate flags, is ironically named. During the Civil War, Alamance County was actually a hotbed of Union support and the birthplace of the Red Strings, also known as the Heroes of America, the guerilla organization that freed slaves and Northern POWs and destroyed Confederate infrastructure throughout the South, but which is honored by no memorials in the county where it began.

When I asked Williamson about that in 2016, he said, “you have what you think your history books say, but I have the heritage in my heart.”

On Saturday, Rev. Drumwright had the county’s history on his mind, albeit a part of it that ACTBAC does not seem eager to acknowledge.

Twenty minutes before he and AJ led the march into Court Square, Drumwright, who was born in Burlington and is Adjunct Professor of Communications at High Point University and Senior Minister at The Citadel Church & Campus Ministries in Greensboro, paused to give the following speech.

“Let me tell you something while we march up this hill. Let me get everybody’s attention. In a few minutes, you’re going to see at the top of this hill. We’re going to make our final turn. We’re going to turn onto North Main Street. This route is historic. They marched Wyatt Outlaw’s body down North Mains Street to bring him to his lynching. When we turn this corner on North Main Street, we are going to dignify the legacy of Wyatt Outlaw, who was killed by the Confederate regime in 1870 because he was the first known elected official in Alamance County that was a Black man. When we turn this corner, Wyatt Outlaw and his spirit are going to be marching in our spirit. I need you to understand, brothers and sisters of Alamance, why we out here today. From 1870 until now, it has taken this long to send a message to Alamance County that Black Lives Matter.”

The Confederate memorial the marchers want removed was erected in 1914 on the spot where Outlaw was lynched 44 years earlier.

While those marchers carried Black Lives Matter signs, the counter-protesters held ones declaring WE LOVE TERRY JOHNSON in honor of the sheriff who personally guarded their beloved statue for weeks. More abusive and less grammatical ones included NO FREE COLORED TV’S TODAY and YALL AINT GOT NOTHING BETTER TO DO. ALL MY FRIENDS ARE AT WORK.

The blonde woman with that sign in her left hand and a Confederate flag in her right danced back to back with a stout man in a camo cap, their posteriors repeatedly bumping together, suggesting she had at least one friend who was not at work.

“Lift your voice and turn your back,” said Rev. Drumwright as he instructed demonstrators not to engage with the counter-protesters. “Send this message to Graham North Carolina. You tried to scare us, you tried to shut us down, you tried to say that we had guns, you tried to call us a hate organization. We come in love, we come in peace, but one thing we didn’t come in is silence, because silence is violence. Open your mouth today that Black Lives Matter!”

Counter-protesters’ attempts at drowning out the sound of Black Lives Matter speeches were ultimately unsuccessful, due to crowd size, acoustics and amplification. The rally ended shortly after 2 p.m., although not before Sheriff Johnson put his arm around ACTBAC founder Gary Williamson in an apparent gesture of friendship and solidarity.

Until recently, Johnson could have kept the Black Lives Matter march from happening. On July 2, the ACLU filed a lawsuit and temporary restraining order against the city of Graham and Alamance County officials, including Sheriff Johnson, Mayor Jerry Peterman and Chief of Police Jeffrey Prichard. Plaintiffs included Rev. Drumwright and the Alamance County branch of the NAACP.

On July 6, a federal judge entered a temporary restraining order with the consent of the mayor, city council and police department, which suspended enforcement of the city’s restrictive protest ordinance.

After the march, AJ, the activist who previously led protests on I-40, Wendover, and Battleground and at Friendly Center, texted me that he was honored to have walked arm-in-arm with Rev. Drumwright, and gave the following statement.