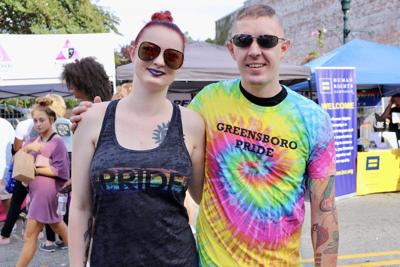 Following the example of other national events and organizations in the LGBTQIA+ community, Greensboro Pride has decided to cancel its 2021 Pride Festival. The following release was sent on the afternoon of Friday, Sept. 3:

It is with heavy hearts that the board of Alternative Resources of the Triad (ART), the 501(c)3 nonprofit that produces Greensboro Pride, has decided to cancel their 2021 festival due to the uptick in COVID Cases in our area. The festival was scheduled for Sunday, September 19, 2021.

With the community we serve already dealing with many autoimmune disorders, it would be irresponsible of Greensboro Pride to continue to hold an event that could become a super spreader. The board held an emergency meeting on Thursday, September 2, 2021 to make the decision. All Pride-sponsored events are cancelled as well.

The Greensboro Pride Board held out until the last possible minute, hoping for a change in the COVID situation, but felt that no matter the protections taken, they wouldn’t be enough to hinder the spread of the disease at their event. The festival was postponed in 2020 as well due to COVID-19.

“Safety is our number one priority,” says Acting Chair Brian Coleman. “Our board felt we could not adequately provide that with the uptick in COVID cases, so we made the safest decision we could, even though it was the most difficult decision to make.”

Greensboro Pride plans to bring the festival back on September 18, 2022

Pride WS announced its cancellation via its social media pages on Thursday, Sept. 2, with the following:

Several factors lead us to make this decision, however it was our guiding principle of creating a safe space for the LGBTQ+ community and what the current effects of the Covid19 delta variant would have on the community, attendees and volunteers. Pride Winston-Salem, sponsor partners and local/state health officials continue to make our communities health and safety our top priority.

We know that this decision is disappointing, however the opportunity to celebrate Pride in Winston-Salem during the official Pride Month of June is exciting! The volunteers of Pride Winston-Salem will not slow in the Festival, Parade and regular event planning for 2022 so that we can bring you the biggest and best Pride Winston-Salem Festival & Parade ever!

For the remainder of 2021, there will be no in-person Pride Winston-Salem events. Currently in development is virtual programming that we will be running in October, right around the time we would have had the Festival & Parade. Stay tuned for more information!