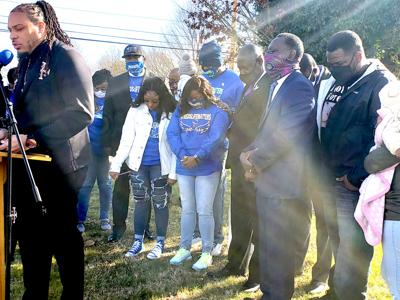 “He was a protector, and he was protective. He cared about everybody and everybody that he loved he’d die for,” said an emotional Jakayla Crawford, 19, when describing her cousin and former Southern Guilford High School classmate 18-year-old Frederick Cox.

Protecting is exactly what many say Cox was doing when he was killed on the afternoon of November 8, 2020. Protecting others and making sure a young boy and his mother reached safety inside Living Waters Baptist Church, located on 1300 Brentwood Street in High Point, and away from a hailstorm of bullets.

Roughly 150 people showed up to honor young Cox’s short life and memory on January 22 while calling on the Guilford County District Attorney to hold the officer responsible for ending his life accountable. The family and High Point’s National Association for the Advancement of Colored People (NAACP) chapter organized the event.

“We’re here in the dead of winter braving, once again, COVID-19, confusion 2020 to bring change in 2021,” said Rev. Greg Drumwright, pastor of The Citadel Church. “We’re here with a grieving family that deserves our utmost respect and support, not just today but for the long haul, to get justice for Fred.”

Cox was shot by a Davidson County Sheriff’s Deputy, who was in plainclothes and attending Jonas Thompson’s funeral at the family’s request, when shots were fired from several vehicles following the end of the funeral, according to the media release.

Wearing blue shirts and masks that read #FredsLifeMatters, attendees took to the street chanting “Fred’s life matters” and “Fred shouldn’t be dead!”, marching from the old Brentwood Elementary School to the Guilford County Courthouse on Green Street, carrying a banner and signs showing pictures of the slain father, brother, son, and friend to many.

“My son didn’t deserve to lose his life as he saved two other lives. They killed my baby. The police killed my baby,” said Teneka Shannon, Cox’s mother. “He took part of my soul. Detective Hill, we demand you be charged for the murder of my baby.”

(Editor’s Note: The officer involved has not been officially named.)

Nationally-known civil rights attorney Ben Crump and Allen Rogers, legal counsel for the family, answered questions on Friday and posed a few of their own.

“Fred Cox was shot in the back while protecting others. He was a hero,” Crump said. “And you just can’t kill a hero and act like we don’t have to give respect to him because he was a negro. That’s not going to be acceptable. He held the door and took those bullets to make sure others got to safety.”

According to the release, the DCS deputy was still on the church property when this occurred and, “at some point during the incident, discharged his firearm which resulted in the death of Frederick Cox” and the need for N.C. State Bureau of Investigation to be called. The DCS deputy has not officially been named, and neither the SBI nor HPPD have formally closed the case.

HPPD treated the incident as three different crime scenes due to the amount of gunfire and size of the property, where they located and estimated 70-shell casing from a 9mm, .40, .45, and a .223, according to the release.

Crump said that the Cox shooting is another in a long list of murdered black people due to excessive force and police not being held accountable, and families not getting answered.

“Now we come to High Point, North Carolina, where Fredrick Cox Jr.’s name joins that roll of our teenage black boys who have been killed and nobody has been held accountable,” Crump said. So we are coming here today to demand justice for Fred!

In a release, High Point Police have stated they “suspect the unknown person was from a rival gang” that began shooting into the crowd. However, Shannon said her son wasn’t into gangs and didn’t have a permit to carry a gun.

“My son wore red. He wore blue. He wore white. He wore purple. He even wore pink because he knew who he was. So that’s an allegation that is a lie,” Shannon said.  “They will do anything, and they will say anything to make my child somebody that he’s not. My child is a hero. Gangs are not heroes.”

Rogers said there is no evidence that he was a gang member.

“A nice narrative to kill the story is that there was a gun somewhere, and he must be a bad guy,” Rogers said.

“If you want to know what a hero is, you look at what Fred Cox did,” Crump said.

The family plans to hold another march on February 18.