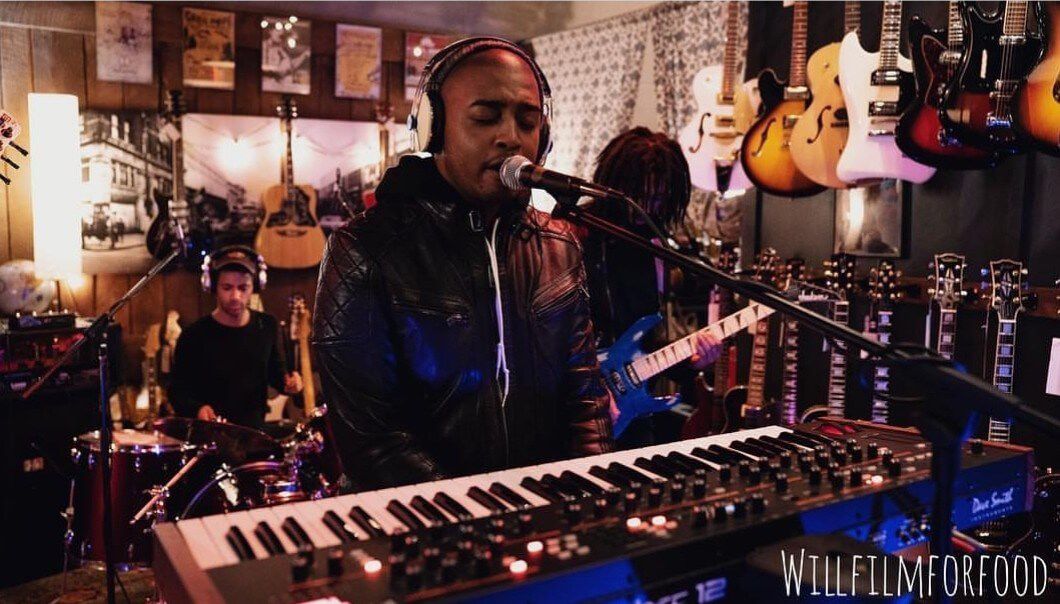 *Editor’s note: There was a date change for the Foxture show. It has been updated in the online version.

After spending most of 2019 as an instrumental trio, the Winston-Salem dream-pop outfit Foxture is back to being a full quartet for their first show of 2020 with Victoria, Victoria and Pinkerton Raid on Jan. 24 at Monstercade.

Health issues forced the band to regroup, waiting for members to mend. But the boys are stoked to return. “I’m just now beginning to feel like I’m 100% back and at ‘em,” said vocalist and keyboardist Marlon Blackmon (who lost his voice in the revelry of Tyler the Creator at the Greensboro Coliseum in October). “Someone at that show had something and whatever it was showed no mercy,” he said of the lingering illness. “No amount of tea and honey could save me.”

Meanwhile, a work injury kept guitarist, Eddie Reynolds, from his instrument during recovery. “It’s been rough not being able to lift my guitar and hold it in my hands and give myself on stage,” Reynolds said. “Music keeps me from that dark void, which opens up when life becomes tough.”

“Music bridges that gap for me, performing brings me peace,” he added.

He said he is glad to be back.

“For several months I was in a dark place, I couldn’t play music because of my spinal injury or do much of anything for myself,” Reynolds said, “through togetherness, communities will bloom and overcome.”

That focus on community influenced their decision to keep playing while finding ways to heal. “We knew we didn’t want to screw anybody over and cancel when there was still a chance for us to do our thing and go be great,” Blackmon said of choosing transition over hiatus for the band. “People found it refreshing and a change of pace, which was comforting, but in the back of my mind, I know how I love playing the songs we’ve written; and how I’d like for them to sound.”

Within that sound, Foxture considers themselves genre “ghosts,” blending “space between dream-pop, indie rock, and post-rock, creating a hauntingly ethereal dream-like reality on every song,” floating in the realms between Silversun Pickups and Circa Survive.

Floating from Blackmon’s initial strictly-recordings solo endeavor, Foxture’s performative path has been paved by experimentation. “It was cool adding guys who had show experience because that was a part of the game that I wasn’t too savvy with at the time,” he said of incorporating performance into the fold.

“I definitely think of things in terms of a live aspect more so now,“ Blackmon said of how fronting a band changed his creative process. “All the things I’ve learned while having three other minds to tether-off of has been nice,” he added of his bandmates bassist Ross Barnes and drummer Andrew Irving. “It helps when you’re surrounded by people all there to be hype and have a good time.”

As for writing, Blackmon remains the central songwriter within the group. “Too many hands in the kitchen can be draining and frustrating,” he admitted. “The guys write their own parts once I have a structure to the songs,” he explained, “sometimes lyrics come before or after, but this is the cleanest way to write the material we write.”

In a pursuit to expand that material, the group has taken a turn toward more upbeat, electronic elements, since their 2017 release, EDEN. Inspiration for the latest direction is carried by artists like Toro y Moi, Kaytranada, and The Weeknd. “We’re working on some singles to release as well as progressing to finish the full length,” Blackmon said of their progress. “At this point, there are some light touches on songs that could potentially be a single release, but these are the most different sounding songs we have ever written, and we want to make sure that we are doing them justice to our own standards.”

As for the show, they’re excited to be reunited as a four-piece with their homies. “They’re both insanely talented bands who we love playing with,” Blackmon said of their bill mates. “Victoria, Victoria has been releasing visuals to accompany their music here recently that have been top-notch and so aesthetically pleasing,” he noted. “And we got introduced to Pinkerton Raid from playing a show together at Boxcar in Greensboro–we hoped to play with these guys again, and now here we are!“

Here they are, indeed. Foxture is back as a full band with Victoria, Victoria and Pinkerton Raid at Monstercade on Jan. 24.

Katei Cranford is a Triad music nerd who once lost her voice raging to Jacuzzi Boys and Diarrhea Planet at Hopscotch, 2014. She hosts the Tuesday Tour Report on WUAG 103.1 FM.