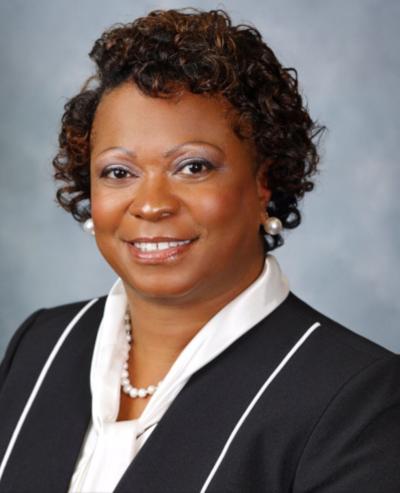 “I stand before you today as a person that seeks truth and accountability,” said public speaker Arnita Miles at the June 2 session of the Forsyth County Board of Commissioners.

“I don’t want to be here today,” continued Miles. “I am a community advocate, I am a United States Army Veteran, I am a former law enforcement officer from this city. I have received numerous phone calls from citizens.” Those calls, said Miles, were about “a county commissioner from District A who has allegedly misappropriated $47,000 meant for a non-profit agency here in Winston-Salem.”

Miles then requested that the commissioners go into a private session to discuss the matter. Before leaving the podium, she said, “Commissioner Tonya McDaniel, resign today!”

McDaniel did not respond to Miles’s allegations, and when the meeting was over, said she had no comment. County Attorney Gordon Watkins said that because the allegations did not involve county funds, they were not “something that the board could address.”

However, McDaniel did address them with YES! Weekly the day before that meeting, after being asked to comment on screenshots of what appeared to be a correspondence between members of the executive board of the Winston Salem/Forsyth County chapter of the NAACP. That correspondence concerned allegations that, in the Fall of 2020, McDaniel received a $47,000 grant from the organization Blueprint NC intended for the NAACP and deposited it into her personal checking account.

“I had no knowledge of the securing, deposit, nor distribution of these funds,” wrote Rev. Alvin Carlisle in one of the screenshots. “The acquisition of these funds was not vetted or approved by me or the sitting Executive Committee. No authorization was given by me or the Executive Committee to open any new bank accounts.” Carlisle would later acknowledge writing the email.

Carlisle was President of the Winston-Salem NAACP from 2016 until 2020. McDaniel is the 2nd Vice-Chair of the chapter.

In her June 2 phone response to this writer’s request for comment, McDaniel disputed that the funds were ever intended for the NAACP but acknowledged that she deposited them in her personal checking account. “This wouldn’t be an issue if London McKinney or Alvin Carlisle had picked up the phone to call me,” said McDaniel. London McKinney is the 1st Vice-Chair of the Chapter.

“None of this regarding Blueprint was relevant to the Winston-Salem Forsyth County NAACP chapter,” continued McDaniel. “The Blueprint grant was granted to me in the excess of forty thousand dollars. It was not a donation; it was a grant that was that was used for Get Out the Vote. I have made full accountability to Blueprint NC. I provided them with all receipts, ledgers, pictures, all of that.”

McDaniel said that her application for the grant was overseen by “an ad hoc committee” that included McKinney. “They knew I was applying for this grant for myself, not in the name of the Winston -Salem/Forsyth County chapter of the NAACP.”

McDaniel said that the Chapter’s current president, Al Jabbar, is aware of the grant and had no problem with McDaniel depositing it into her bank account.

“He has talked to Blueprint. He has gotten all kinds of documentation. I even allowed him to get into my bank account, my security, to verify. Nothing was set up under the NAACP. The why I applied this way was because of the situation that I am sitting in right now. We had such a chaotic chapter under Alvin Carlisle that I did not want to apply for this to have oversight with them. That is why London McKinney was an overseer of the way we received this money and how the money was spent. As I previously stated, documents have already been provided to Blueprint. They have full accountability; I am waiting for a letter or statement and a 1099 that they’re supposed to be sending me. The NAACP has not received anything, period. So, the screenshots are valid, but they are not valid relative specifically for the NAACP Chapter.”

On June 3, Serena Sebring, Executive Director of Blueprint NC, told YES! Weekly that her organization “did disperse funds to support an election protection program by the Winston Salem NAACP in the 2020 season.” However, Sebring declined to identify the individual who had requested the funds. Instead, she gave the following statement, which appears to contradict McDaniel’s claim that the funds were not relevant to the Winston-Salem Forsyth County NAACP chapter.

“It was applied for by the Winston-Salem NAACP as a host organization. They met all our 12 9 criteria to receive funding through our program for election protection. Beyond that, we do maintain that we’re not at liberty to respond, as it sounds like an NAACP matter.”

More apparent evidence that the funds were requested on behalf of the NAACP was offered by Arnita Miles, who emailed YES! Weekly what appeared to be photos of a grant application to Blueprint NC, listing the Winston-Salem/Forsyth County NAACP as applying for the grant and Tonya McDaniel as “Organization Point of Contact.”

“I did my own investigation into this situation after receiving several telephone calls from concerned citizens and members of the local NAACP,” said Miles in a June 4 phone call. “I was told, and did confirm with Blueprint North Carolina, that the grant was applied for on behalf of the NAACP. I know that Ms. McDaniel did apply for the grant. So, the question is, with the statement from the former president of the NAACP that he had no knowledge, and his executive council, had no knowledge, there’s fraudulence in there somewhere. So, I do believe that fraud has occurred, and it’s my personal information from all the information that I have gathered, that a fraudulent act did take place, wherein Ms. McDaniel applied for this grant on behalf of, or using the name of, the local chapter of the NAACP without their knowledge. And finally, the record showed that Ms. McDaniel didn’t even give any funding or any monies to the local chapter of the NAACP after she received the grant. So, there’s fraud, and there’s misappropriation of the grant funds. That’s why I called for her resignation due to unethical behavior and unethical misappropriation of this grant.”

Miles said she is confident of her allegation and evidence. “I am a former law enforcement officer. I am retired from the United States Military, where I did serve as a military police officer. I have investigative skills. I attempted to discuss this with Ms. McDaniel, but she has not responded. I contacted her and Alvin Carlisle at the same time. Mr. Carlisle did respond, and Ms. McDaniel did not.”

Calls to Commissioner McDaniel asking or comment on Miles’ allegations have not been returned. Neither have emails to current NAACP Winston/Forsyth Chapter President Al Jabbar or Vice-Chair McKinney. On Monday afternoon, former president Alvin Carlisle responded with the following statement:

“It is very unfortunate that Ms. McDaniel chose to mention my name in connection to this. Those other names that are mentioned are elected officials of the branch that were seeking clarity concerning this issue. I am no longer an officer of the organization and was not involved in the investigation of this issue. My letter to the executive committee was only intended to inform the officials of the branch that I was aware of the issue and that it was something that I had no knowledge of until recently.”

This article will be updated with any future statements received from McDaniel, Jabbar, McKinney, or other relevant parties.