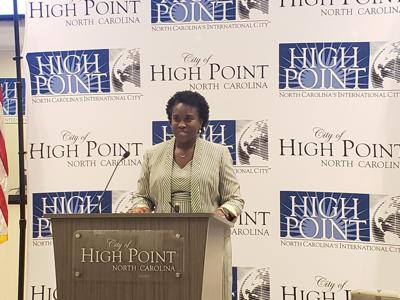 The City of High Point rolled out the red carpet for its new city manager Tasha Logan Ford last week with a press conference and reception introducing her.

During a press conference held in the council chambers of city hall on Thursday, July 22, Mayor Jay Wagner said that the city is excited to have Ford on board and leading the charge.

“We think we’ve selected someone who is up to the task,” he said during the press conference.

Ford was appointed to the position on May 17, 2021, and began the job on July 19. She is responsible for a citywide budget of $314 million and 1,463 full-time employees. Ford said that she feels that local government is where you get to meet residents and build relationships.

“Living out our values is more than just words but, it must be demonstrated in our deeds,” she said. “We must do the work to bring the goals to fruition, realizing the value of each individual resident no matter which part of High Point they call home.”

Ford says that she has received her orders from her “nine” bosses. Last year, according to her statement, the city council added short-term goals that included a marketing campaign, focusing on diversity, events, and quality of life, a targeted neighborhood campaign, and plans to recruit at least 50 new office jobs and five investors to the downtown area.

“Our city council has been very clear. They’ve charged me to maintain the financial stability of this organization, maintain successful relationships to support a thriving furniture market experience, to continue to build upon the existing work to drive investment downtown, think holistically about this entire community, and to position our growth for the future,” she said at the press conference.”

Ford is no stranger to the Triad area. She earned a bachelor’s degree in human development and family studies from the University of North Carolina - Greensboro and a master of public administration degree from North Carolina State University. She has served as the assistant city manager of Winston-Salem, under the guidance of Lee Garrity, since early 2018. Before that, she worked her way up to Assistant and interim city manager for Goldsboro from 2004 to 2013, and assistant city manager in Rocky Mount from 2013 to early 2018.

She is both the first woman and first African-American to serve as city manager in High Point’s history. The historic nature of the position is not lost on Ford.

“My hope is that my service in this capacity is a source of inspiration, not only for aspiring African-Americans and women but anyone that has the aspiration of living out their full potential no matter what she may look like,” she said.

Ford, who comes from a military family, said that living in various communities allowed her to learn from her parents how to become a part of a community.

“Early in life, I had the importance of service instilled in me.”

She said that it is too early for her to have specific actions plans but her priorities include working with the council, developing and maintaining community partnerships, keeping the community safe and ensuring the quality of life, and leading with transparency and integrity.

“It’s too soon for me to delve into specific action plans as these first months have to be devoted to learning this organization, building relationships that already exist, setting expectations, and learning how our staff operates.”

What she expects is that staff provides “great service, good stewardship, and transparency.”

“We have to perform our duty of serving others, policing our city, responding to a fire or traffic accident or responding to a power outage, or picking up the garbage. I want our workforce to continue providing great service to our citizens. You are expected to serve in the capacity of your individual role, and you are also working in an environment where you are valued.”