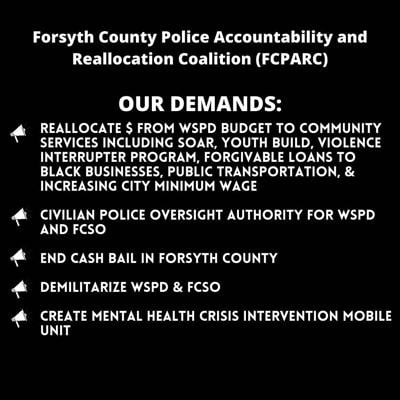 “What would have happened if those were Black people? I can safely tell you right now that we would all be dead,” said Hate Out of Winston’s Miranda Jones in Triad Abolition Project’s “The People’s Report” via Facebook Live on Jan. 10.

Jones was speaking of an observed comparison of the overmilitarized presence of, and violence from police during the Black Lives Matter protests last summer to the sparse presence and intervention of police during the siege of the United States’ Capitol on Jan. 6.

“I can also safely say none of those actions would have entered the consciousness of those engaged in work around liberation, freedom, and justice.”

Jones asked viewers to watch the footage of Capitol Police officers appearing to open a barricade holding back a mob of Trump supporters, and “standby as these people stage a coup.”

“We want you to think about this idea that law enforcement keeps us safe,” Jones said.

Wake Forest University sociology professor and TAP organizer Dr. Brittany Battle said she was not surprised at all by what happened on Jan. 6.

“This level of violence, this level of hatred is demonstrated on Black communities, Brown communities, on queer people daily from citizens and also from state actors, meaning the police and military,” she said.

“To our white comrades, allies, etc., your outrage does not save the lives of Black people; your outrage comes after we are dead,” Jones added. “You should not stay mired in outrage because when you are responding, Breonna is dead, George is dead, [Miriam Carey] is dead.”

Episode 3 of “The People’s Report” discussed the events of last Wednesday’s violent insurrection incited by President Trump— that has claimed the lives of five people, two of which were Capitol Police officers— while calling for white comrades to get involved with a network of progressive activist groups that have formed into the Forsyth County Police Accountability and Reallocation Coalition (FCPARC).

FCPARC is composed of Hate Out of Winston, Triad Abolition Project, Winston-Salem Democratic Socialists of America, Forsyth County Community Bail Fund, Drum Majors Alliance, and NCSPAN that seeks to reallocate funding from the Winston-Salem Police Department’s $78 million budget. The coalition has made the following demands publicly to Mayor Pro-Tem D.D. Adams on Dec. 21, 2020, and now, to the City of Winston-Salem’s Public Safety Committee on Jan. 11:

In their presentation to the City of Winston-Salem’s Public Safety Committee, FCPARC highlighted Community Review Boards’ alleged ineffectiveness due to police and politicians erecting “barriers to stop CRBs from carrying out meaningful oversight.” They posited that for CRBs to be effective, they must have investigating powers (including subpoenaing powers), a broad scope of investigations, transparency, independence (from police), meaningful disciplinary actions, and a budget.

Nia Sadler of FCPARC said since the WSPD Citizen Police Review Board is an advisory board to the Public Safety Committee as well as City Manager Lee Garrity, who ultimately makes the final decision after an appeal has been made to Chief Catrina Thompson’s decision, facts are presented, and testimony is collected and evaluated.

FCPARC believes this process isn’t independent because of Garrity’s alleged close ties with the WSPD and the Forsyth County District Attorney’s Office.

Sadler highlighted that in the U.S., severely mentally ill people generate 1 in 10 calls for police and occupy 1 in 5 of prison and jail beds. Sadler also noted that people with disabilities and mental health diagnoses are more likely to be victims of police’s use of excessive force and are more likely to be killed by police— more so if they are Black or Brown.

FCPARC presented a program from the City of Eugene, Oregon, called Crisis Assistance Helping Out On the Street (CAHOOTS) program. They hope to implement a similar program in the City of Arts and Innovation. CAHOOTS is a two-person team consisting of a medic and crisis worker responding to mental health crises, conflict resolution, welfare checks, suicide threats, substance abuse, etc., relying on trauma-informed de-escalation and harm reduction techniques. According to their research, CAHOOTS’ annual budget is around 2.1 million dollars, and roughly out of 24,000 calls last year, only 150 needed police backup.

FCPARC also seeks an overall $2.5 million increase to the Department of Rehabilitation and Youth Services— with $1 million going to SOAR and $1.5 million in the Youth Build Program.

“The Public Safety Committee has had no problem approving grants for the militarization of the WSPD, despite the fact that when these grants run out, the City will be on the hook for those expenditures,” said FCPARC’s Aly Jones during this presentation. “Programs like SOAR and Youth Build each serve less than 10% of eligible residents; we urge you to please stop approving grants that support non-Winston residents and invest in programs that provide productive activities for people at-risk for committing crime or being arrested, and that will contribute to the city’s economy by creating successfully employed taxpaying citizens— not police officers who go home to Kernersville, Clemmons or High Point.”

FCPARC supporters are encouraged to sign a petition found at https://www.triadabolitionproject.org/fcparc.

Katie Murawski is the former editor-in-chief of YES! Weekly. Her alter egos include The Grimberlyn Reaper, skater/public relations’ board chair for Greensboro Roller Derby, and Roy Fahrenheit, drag entertainer and self-proclaimed King of Glamp.