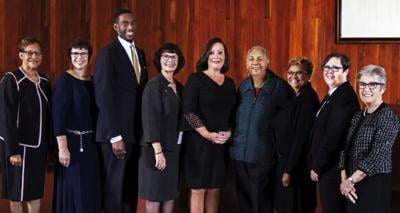 Tuesday night's Greensboro City Council meeting ended on an emotional note for two different reasons. Michelle Kennedy expressed shame and regret for past actions, while Sharon Hightower set a precedent for the future of the city's commissions and conduct.

During closing remarks, At-Large representative Kennedy apologized for what she called her silence and complicity in the Marcus Smith case, spoke of watching the verdict in the Derek Chauvin murder trial, and criticized the city for attempting to block the release of GPD bodycam footage allegedly depicting additional incidents of hogtying.

In April 2020, council voted to authorize an independent investigation of Smith's death, which occurred after eight GPD officers hogtied him during the 2018 NC Folk Festival. Two weeks later, after a federal civil rights lawsuit was filed against the city, council reversed its position pending litigation.

The other thing Kennedy said was weighing on her was the matter of transparency.

"This council has fought really hard against a gag order in relation to the Zared Jones case, and it would be hypocritical for us to simultaneously fight the release of videos that allegedly depict other hogtying incidents that took place before the death of Marcus Smith."

In the ongoing lawsuit, attorneys for the Smith family have allegedly uncovered evidence of hogtying by GPD going back ten years, while city attorneys have moved to block the release of those bodycam videos.

Kennedy also stated that "sitting here and taking a stance of silence, while what we know is an incredibly broken and racist system continues to exist, makes me complicit, not just in the death of Marcus Smith, but in the death of every Black man at the hands of that system."

She then said, "the only thing that I can do at this point to try to move back in the direction that my conscience was telling me that I should have stayed in the whole time is to ask for us to go back to following that model that we discussed, of Charlottesville, which is calling for an independent investigation even though we are in the midst of litigation." She concluding by calling for "closure" and "understanding of the reality of the events that occurred on that day," ending with "for me, that's real transparency."

"I'm not prepared to vote this evening," interjected Mayor Nancy Vaughan. "I think we need to have a discussion on what the complete ramifications are. I'm not averse to talking about this. I am about voting on it today with no framework."

Kennedy suggested council should, at their next scheduled meeting, discuss what "framework may be possible for that independent review body."

City Manager David Parrish's suggestion, responding to Vaughan, indicated that council had a packed agenda for the next session, and there may not be room for a new item until late May. An unsatisfactory response for Johnson, who suggested Parrish determine what could be pushed back.

"If we could come to some resolution, it would be good for our city and good for its residents. So, if there is something that is not quite as pressing, and you can make that decision because that's why we sign your check, Johnson said.

She and Parrish both laughed, and Johnson explained "to our viewers" that the council doesn't "literally" sign the city manager's check.

Vaughan suggested Kennedy change her motion, and she agreed to say, "I make a motion that we have a special work session regarding an independent investigation into the death of Marcus Smith."

Parrish interrupted and said, "Considering the topic, I think it would be helpful to at least have a consensus."

Kennedy restated her motion. It was seconded by Johnson and passed unanimously.

In other business, District 1's Hightower denounced a member of the zoning commission for his treatment of a Black woman trying to speak about conditions in her neighborhood.

Hightower called for the removal of local contractor Tony Collins from the Zoning Commission over his refusal to address Dr. Carrie Rosario by her title at the Commission's Monday night meeting. In a video clip of the meeting, Collins repeatedly addressed Rosario as "Mrs. Rosario," despite her polite and repeated requests to be called "Dr. Rosario," before he eventually doubled down and addressed her as "Carrie."

Hightower began by saying she wanted to speak about "an example of white privilege" before briefly describing Collins' treatment of Rosario and asking that he be removed from the commission immediately.

"There doesn't need to be anything about racial sensitivity training. There's nothing sensitive that you can teach the man who did this. This is not the behavior that needs to happen."

Hightower said that Collins' insulted "a highly intelligent Black person, who was simply asking for respect for who they are," adding "that behavior is unacceptable" and "if I could have gone through the TV, I probably would have."

Hightower then made the motion to watch the video of Monday's incident, with multiple voices seconding.

In the video, when Rosario spoke of problems in her neighborhood, Collins interrupted, saying, "I think we kind of lost our way on what we were talking about," and then said, "we're going to approve the standards that have been presented, and if Mrs. Rosario has something about whether . . ."

"Dr. Rosario, thank you," she corrected.

Rosario again requested to be referred to as "Dr. Rosario."

"Well, you know, I'm sorry," said Collins in an exasperated tone, "but your name's down here as Carrie Rosario. Hey Carrie."

"It's Dr. Rosario," Rosario explained. "I wouldn't call you Tony, so please, sir, call me what I would like to be called. That's how I'm identified . . ."

"My name is Dr. Carrie Rosario. It really speaks very negatively of you as a commissioner to be disrespectful," Rosario said.

"I'm not trying to be disrespectful," said Collins, "but you're negotiating something that happened four years ago. We've taken on this function. This is not a zoning function. It's a planning function, and Mr. Chairman, I think that if there's something she has, something specific, in these standards, then let's hear what it is."

At that point, the video clip ended.

"We all feel passionate about things. I'm the first one to be passionate. But this is ultimately about disrespect for Black people by someone that's white and feels privileged to say and behave like that with no consequences," Hightower said. "This is what we constantly deal with as African-Americans. I get this regularly from other folks, so I know how this feels. We didn't put people on that commission to do this. To be dressed down like this in a public forum, it's an ultimate insult."

"All the research shows that, even if an African-American woman has degrees, a white woman who just has a high school education will still have more advantages. The theme that has been one of the driving forces for African-Americans is education. This just was bad manners. She asked several times, 'please call me what I want to be called,' and he refused. That's just bad manners, and he kept right on. I think that commissioner should be removed for cause."

District 4's Nancy Hoffman, who appointed Collins, suggested he be offered a chance to apologize.

"I think there are learning and teachable moments and that sometimes, our behavior just needs to be pointed out and questioned, and people need to be given an opportunity to see that they were wrong."

Wells disagreed and said that Collins' disrespect for Rosario might have been "just because she was a woman, rather than a black woman," but that it didn't matter, and "we need to have some punitive action."

Council voted unanimously to remove Collins and issue a letter of apology to Rosario.