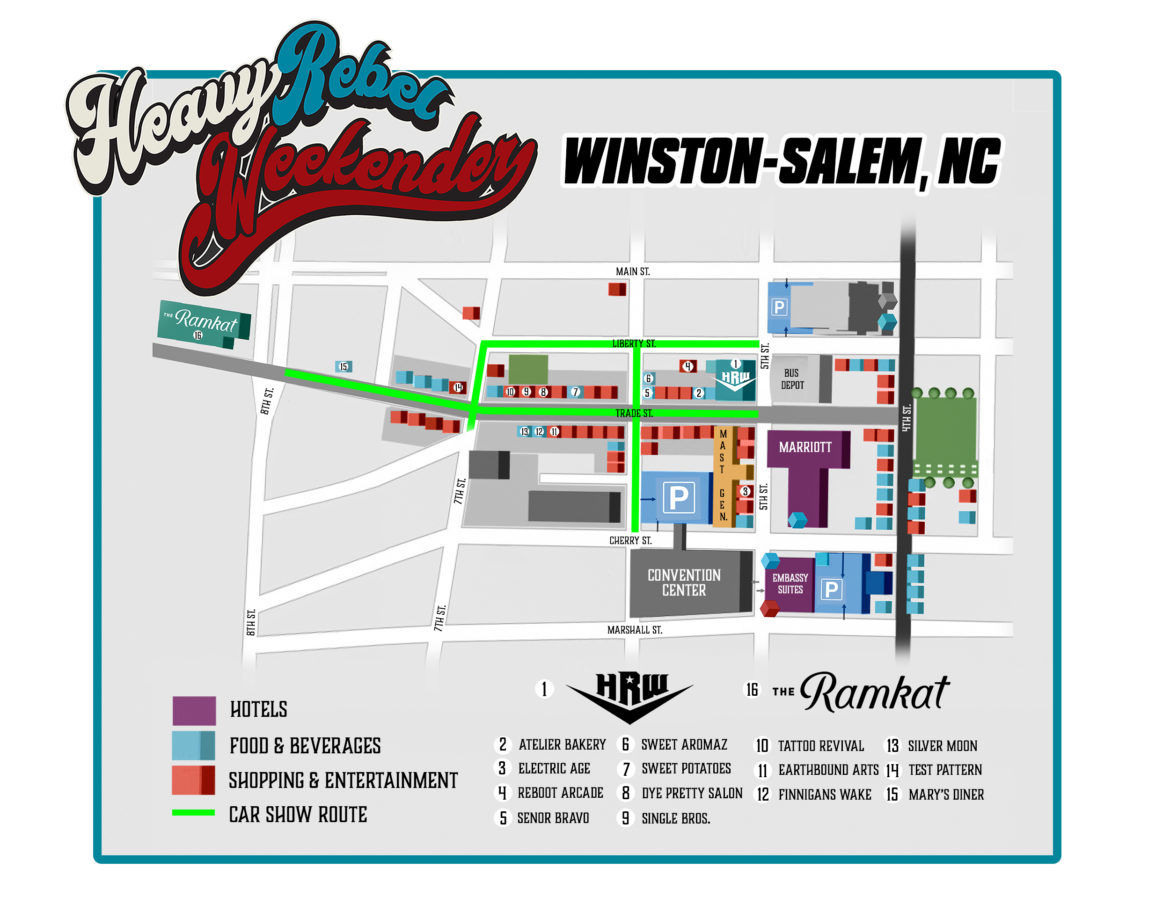 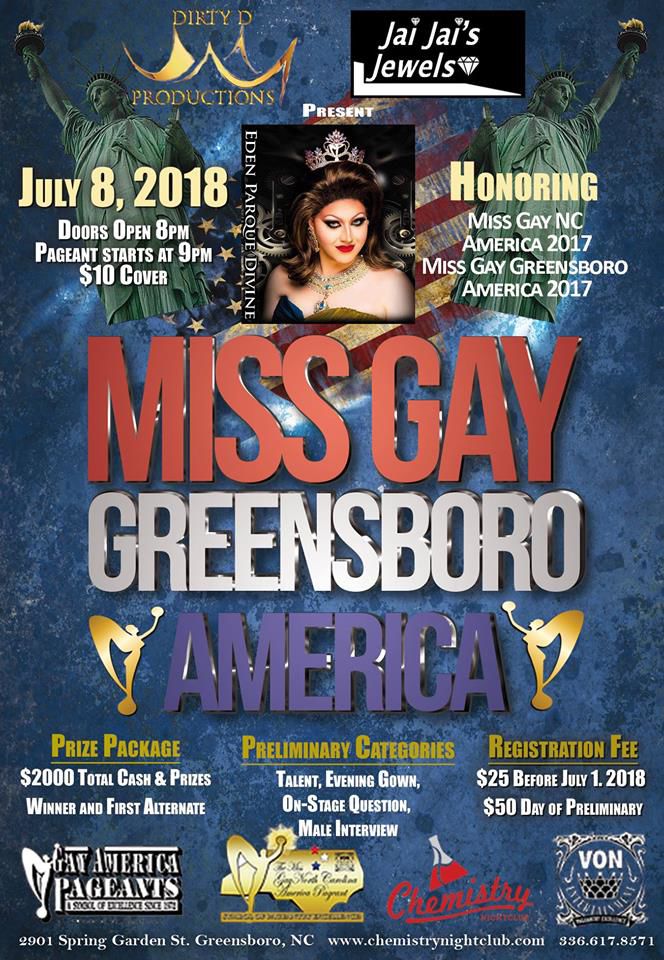 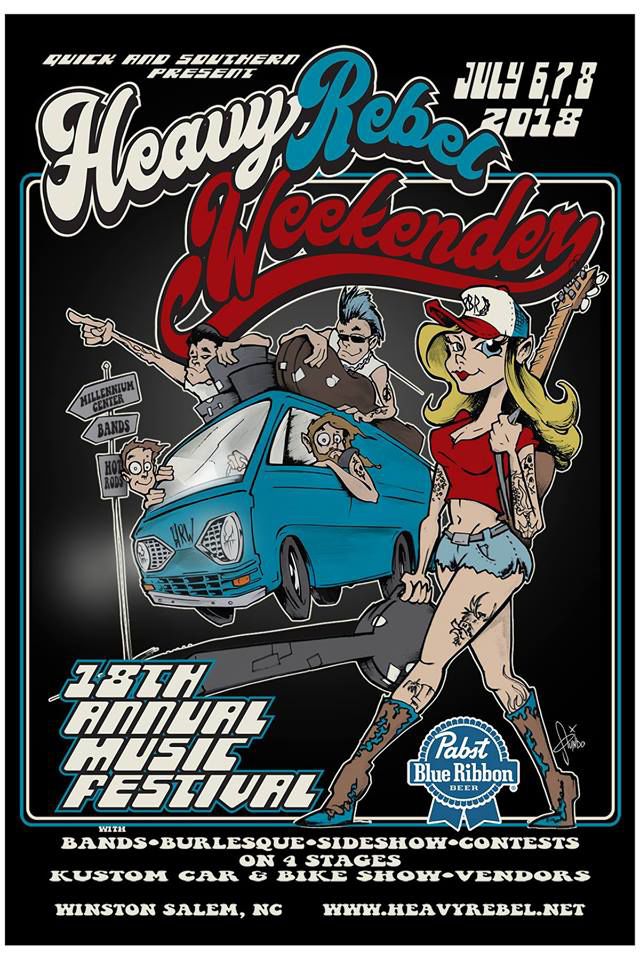 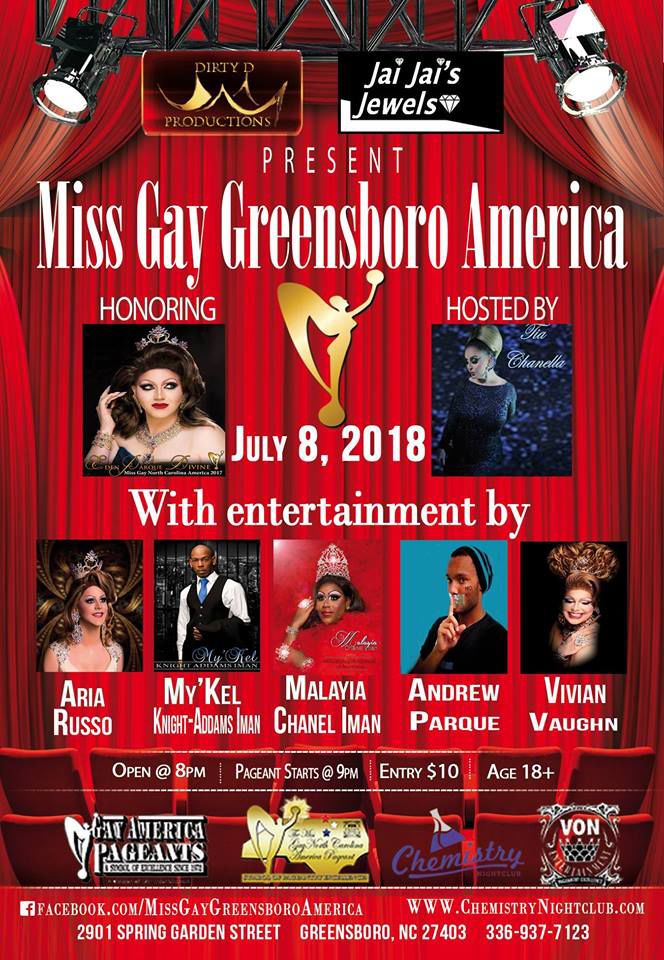 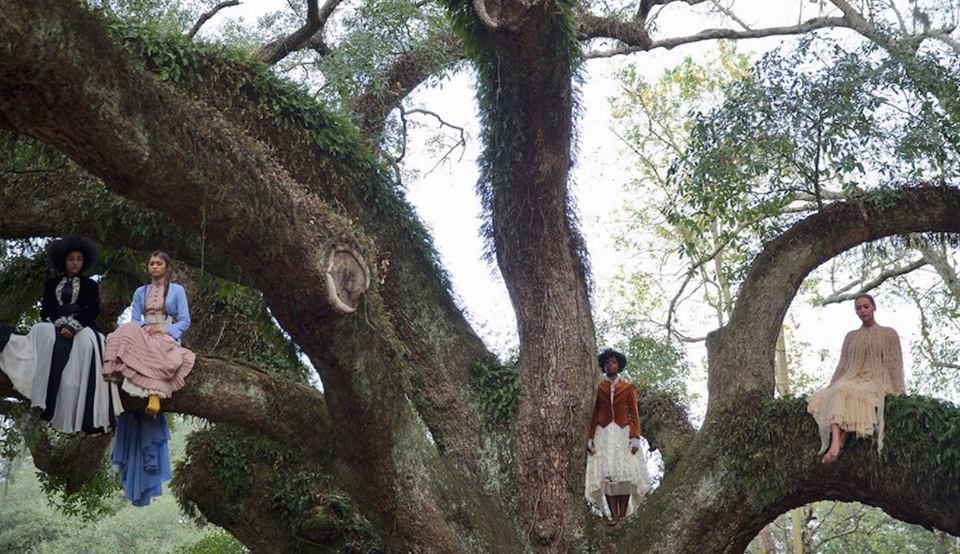 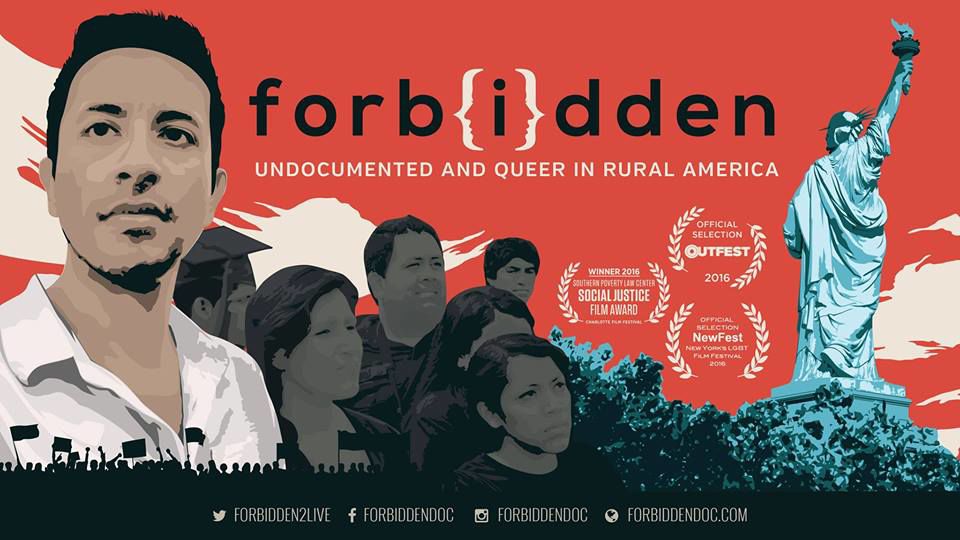 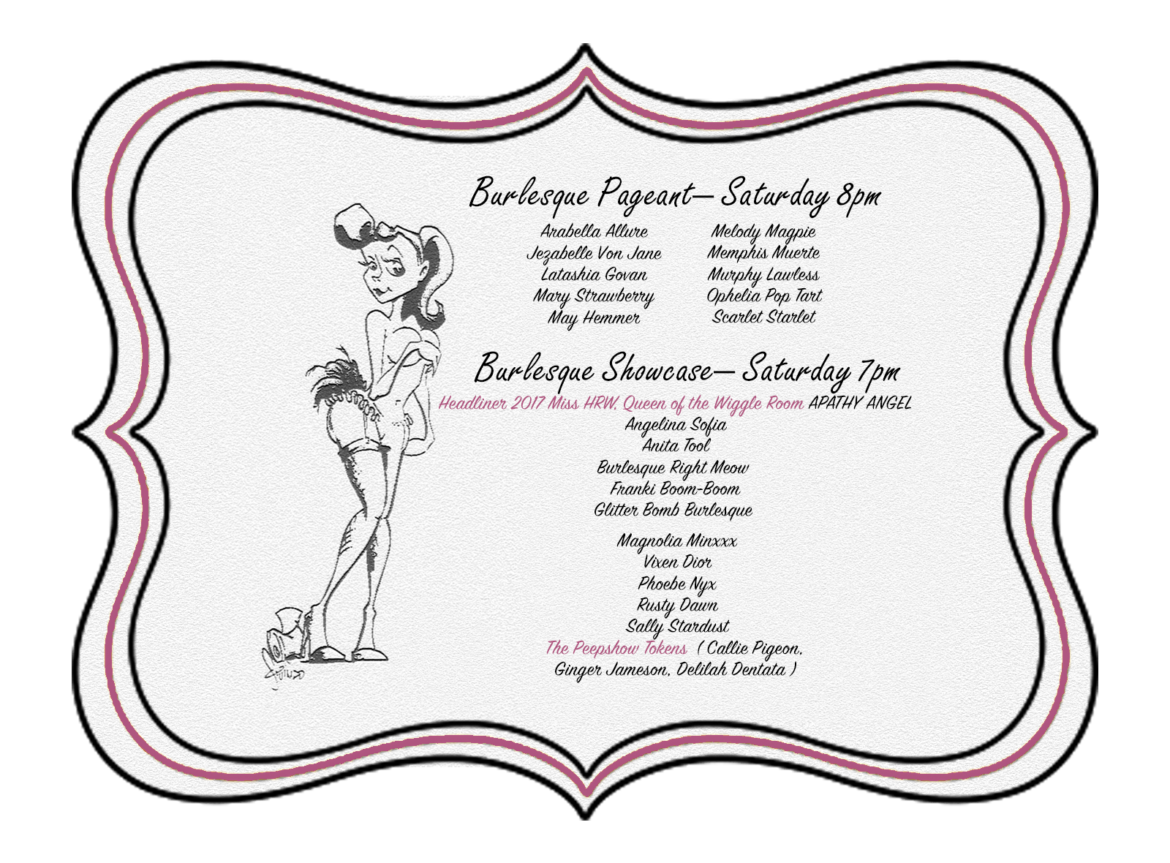 1. From July 6-8 in Winston-Salem, Heavy Rebel Weekender will take over downtown for the 18th year! Live music, a car show, unique vendors, burlesque shows, Krispy Kreme-eating and Pabst Blue Ribbon-drinking contests can all be expected at this year’s festivities. Check out Katei Cranford’s write-up from this week’s paper about HRW here. The schedule and lineup for the music and other shows is located here. HRW takes place on Trade Street, Liberty Street and West 5th Street. Friday night, attendees can expect live music on the Main, Underground and Jailhouse stages and a burlesque show on the Main Stage. On Saturday, from 7 a.m. until 4 p.m., the 18th Annual HRW Car Show presented by The Camel City Skulls and The Millennium Center will take place in the art’s district and the winners (Best Paint, Best Traditional, Filthiest Rat, Best Custom and Show Stopper aka Best in Show) will be announced at 2:30 p.m. For more information, visit the Facebook event page.  At noon there will be big wheel races, mud wrestling at 2:30 p.m., a burlesque showcase at 7 p.m. followed by the Wiggle Room Queen Competition at 8 p.m. and of course, live music throughout the evening. On Sunday, the festivities kick off with the Krispy Kreme-eating and PBR- drinking contest at 2 p.m. Then there will be a burlesque show at 4 p.m. followed by an Upright Bass Slapdown and Showcase at 4:15 p.m. and of course, live music throughout the afternoon. Tickets for the car show registration is $15. Heavy Rebel Weekender one-day passes are $35 or a three-day pass is $90. To purchase tickets, visit the website.

2. On July 6 in Greensboro, from 7 to 9 p.m. meet your favorite fashion icon, Newheart Ohanian, at Vintage To Vogue, located at 530 S. Elm St. Ohanian is most known for her work as a stylist on Beyonce’s visual concept album “Lemonade.” She is also a New York City-based stylist for International Vogue, Harper’s Bazaar and Marie Claire. There will be music, drinks and a chance to win a styling consultation. For more information, visit the Facebook event page or follow Vintage To Vogue on social media.

3. On July 7 in Greensboro, give back in a fun way with Music For Meals 5 Free Concert/Food Drive hosted by Ed E. Ruger and I.C. Shows at Shiners, located at 435 Dolley Madison Ave. From 4 p.m. until midnight, there will be performances from over 20 groups (from seven different genres), bounce houses, games, free food, face painting and more. From 4 p.m. to 8:30 p.m. this will be a family-friendly event. After 8:30 p.m., it will be a party open to adults 18 years and up. “This is our 5th Music For Meals food drive. We have raised 2,800+ lbs of food w/ the first 4 food drives,” the Facebook event page stated.  “Our goal this year is to raise 1,000 lbs of food for Out Of The Garden Project. They are an organization that helps keep the Triad area schools open for free meals during the summer, sends mobile food pantries all over the Triad [and] helps in many more ways.” All you need to get in is three cans of non-perishable food items or a $5 donation.

4. On July 7 in Greensboro, join Joymongers Brewing Co., located at 576 N. Eugene St., in celebrating two years of business! From noon to midnight, the brewery will have live music, food trucks and from noon to 3 p.m. there will be an adoption event for Merit Pit Bull Foundation. The music lineup will be the Carri Smithey Band (from 3-5 p.m.), Shiloh Hill (from 5-7 p.m.), Brother Hawk (from 7-9 p.m.) and Old Heavy Hands (from 9-11 p.m.). Participating food trucks are Medley Food Truck (from noon-4 p.m.), Azteca Taco Truck (from 4:30-7:30 p.m.) and Food Freaks of NC – Food Truck (from 6-9 p.m.). For more information, visit the Facebook event page.

5. On July 8 in Greensboro, Miss Gay Greensboro America will be holding a preliminary pageant at Chemistry Nightclub, located at 2901 Spring Garden St. Doors open at 8 p.m. and the pageant starts at 9 p.m. This pageant is honoring Miss Gay North Carolina 2017 and Miss Gay Greensboro America 2017 Eden Parque-Divine and is hosted by Tia Chanella. There will be entertainment by Aria Russo, My’Kel Knight-Addams Iman, Malayia Chanel-Iman, Andrew Parque and Vivian Vaughn. Entry for non-competitors is $10. For more information, visit the Facebook event page and the Facebook profile page.

6. On July 8 in Greensboro, don’t miss Renee Dion, Smooth Essential, The Zoo Peculiar and opening for all these acts is Revebrie from 9 p.m. until midnight at the On Pop Of The World Collective, located at 1333 Grove St. Dion’s music is a blend of jazz, soul, hip-hop and rhythm & blues. The Facebook event page stated that Dion is known for her stage performance and passionate vocals and for bringing people together to find freedom in music. According to the page, The Zoo Peculiar is known for their “exuberant, vaudevillian live performances,” which often incorporates balloon animals, carnival performers and costumes. The indie lo-fi singer-songwriter Revebrie will open the stage. For more information, visit the Facebook event page.

7. On July 8 in Greensboro, do lunch at the North Carolina Food Truck Rodeo at Grove Winery, located at 7360 Brooks Bridge Rd. The Food Truck Rodeo takes place from noon to 4 p.m. and will include Thai Box Zing Catering, King-Queen Haitian Cuisine, Chez Moi – A Baking Renaissance…Experience the Awakening!, Natty Greene’s Brewing Co., Foothills Brewing, Gregory Musgrove Custom Guitar, Baconessence and The Pearl Kitchen Food Truck & Catering. There will also be live music by Love & Valor. This event is family-friendly and will have dining areas available. For more information, visit the Facebook event page.

8. On July 8 in Winston-Salem, join a/perture cinema and Sanctuary City Coalition Winston-Salem for a screening of Forbidden: Undocumented and Queer in Rural America. Following the June 30 Rally, this screening is intended to keep the conversation going about the immigration in the United States. In addition to the screening, local activist and protagonist of the film, Moises Serrano, will be hosting a discussion following the film. The Facebook event page stated that the intention of this screening is to provide a space for learning, engaging and organizing around issues such as immigration and LGBTQ+ rights. According to the Facebook event, “Forbidden illustrates the intersection of queer and immigrant issues and addresses the realities facing LGBTQ minorities who have grown up in the rural south surrounded by white faces and homophobic attitudes. The threat is real — the KKK still holds weekly meetings not far from Moises’ hometown of Yadkinville,[North Carolina] and he has found dead rats in his mailbox and white crosses on his front porch. Not everyone in the United States is treated equally or given a fair chance. Moises’ story demonstrates courage, conviction and an unyielding desire to succeed. Our goal with Forbidden is to motivate viewers to take action and inspire young people to speak out so that a story like Moises’ is not simply seen as remarkable, but is seen as normal.” This screening is free and first-come, first-serve. For more information about the film, visit a/perture cinema’s website.