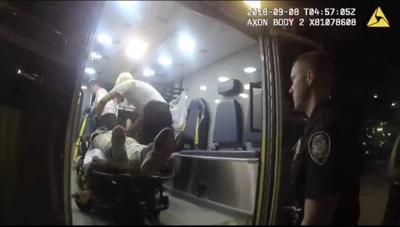 In a phone conversation, Dr. Thompson told YES! Weekly that “two things really stuck out for me” about the footage of Smith’s death: the position in which Smith was retrained and what emergency medicine designates a “witnessed arrest.”

“Hobbling, sometimes called hogtying, in which a person is held face-down on the ground with their hands and legs fastened together behind their back, is a very dangerous way to restrain someone,” Thompson said. “So, seeing that was jarring, especially considering what we know about the danger of that kind of restraint.”

“Arrest” in the context of “witnessed arrest” does not mean when someone is taken into custody by law enforcement.

“It’s when they collapse right in front of you,” Thompson said, “or go unresponsive after becoming prone. When someone in emergency medicine witnesses this, they are supposed to do CPR right away.”

Instead, EMTs Abbott and Dylan Alling waited until after Smith was placed on a gurney and transported into the ambulance. Thompson viewed this process from the body camera footage of GPD Officer Alfred Lewis, which the City of Greensboro uploaded to YouTube under the title “November 30, 2018 Video 15” (the date is that on which the videos were released, not of Smith’s death, which was Sept. 8, 2018), with no explanation of what it depicts.

“You can see on the video when Mr. Smith became unresponsive,” said Thompson. “That means it was a witnessed event. Proper procedure would have been to start CPR immediately. But on the video, that does not happen until several minutes after he becomes completely unresponsive. It’s hard to see on that video whether he stops breathing, but to me, it looked like he did. Regardless, he goes completely unresponsive, and then there is a delay in starting CPR. There seemed to have been concern on the part of everyone there as to whether or not he had a pulse or was breathing.  In a case like that, that’s the moment to jump into action and start CPR immediately.”

(In the video, Smith is mostly offscreen below the bottom of the frame until his unresponsive body is loaded onto a gurney, but it provides a good view of the actions taken by EMTs Abbott and Alling.)

As previously reported, Smith, who was confused and agitated (but not violent or aggressive while having a mental health crisis), approached police officers on Church Street and asked to be taken to the hospital. The officers opened the door of a patrol car and asked him to sit and wait for the ambulance. In the back seat of the car, he appeared to become more agitated and struck the glass of the window with the flat of his hand. An officer opened the door. As soon as Smith emerged, he was thrown to the ground and hogtied with a RIPP Hobble Restraint. Former Greensboro Police Chief Wayne Scott, who retired in January of this year, stated that Smith “collapsed.” However, that is not what the videos depict.

For several minutes, Smith was held facedown on the pavement, where he was handcuffed. His feet were raised and bent behind his back and attached to the handcuffs with the RIPP Hobble device, in a manner that the GPD’s own directives manual cautions officers not to do. His groans and cries of “stop” and “please” gave way to gasps, then silence and stillness. By this time, Abbott and Alling had arrived, and stood by watching.

The officers stood up and conversed among themselves, then noticed that Smith was not breathing. A graphic view of Smith becoming limp and unresponsive, his face so slack and ashen that he appears dead, can be seen in “Greensboro Police Hogtie and Kill Marcus Deon Smith,” a three minute and 50 second compilation of the videos uploaded to YouTube by the Homeless Union of Greensboro.

On Video 15, Smith is mostly out of view below the bottom frame until his limp form is loaded onto a gurney, but the following actions by the EMTs can be seen.

There is no sound until 0:32, at which point an officer tells the offscreen Smith to “relax, relax.”

At 2:15, EMT Ashley Abbott comes into view with the gurney in the right background of the frame.

At 2:35, Smith is rolled over onto his side. Officer Duncan takes Smith’s pulse with his bare hand on the left side of Marcus’ neck just under the jaw. “Hey, hey,” says Duncan, “I don’t feel a thing.”

The RIPP Hobble is removed.

At 3:11, she says to EMT Alling, “I don’t feel anything, do you?” This is very difficult to hear on Video 15, but more audible on others.

At 3:57, Abbott and Alling begin moving the gurney towards the ambulance.

At 4:05, Officer Jordan Bailey removes Smith’s handcuffs as the gurney nears the ambulance.

At 4:40, the gurney is lifted into the ambulance.

At 6:15, Abbott does manual chess compression

At 6:48, Officer Bailey unpacks the CPR machine and hands the back board to Abbott, asking “Do you want me to slide this under?”.

At 7:03, Abbott slides the back board under Smith.

At 7:37, Bailey hands the CPR machine to Abbott,

At 7:48, the bag valve device on Smith’s face and the CPR machine starts to make compression sounds.

The ongoing Federal civil rights lawsuit over Smith’s death lists Abbott and Alling as Defendants, along with Officers Justin Payne, Robert Duncan, Michael Montalvo, Alfred Lewis, Christopher Bradshaw, Lee Andrews, and Douglas Strader, as well as the City of Greensboro. The Complaint, filed on April 10, 2019, by the People’s Law Office of Chicago and the Greensboro law firm of Graham Holt, describes that both EMTs “had the opportunity, duty and ability to intervene on behalf of Marcus, but failed to do so.”

(By this writer’s observation and calculation, three minutes and two seconds elapsed between Abbott saying ““Let’s get him on the bed and get him into the truck” and beginning CPR, a delay that would not have occurred if they had worked on him directly in the street.)

Marcus Smith’s death has been compared to that of George Floyd. Delayed medical response may have also been a factor in Floyd’s death.

The Aug. 11, New York Times article “New Footage Shows Delayed Medical Response to George Floyd” quoted Dr. Rohini S. Haar, a medical expert at Physicians for Human Rights, as calling the delayed response in the Floyd case “a cascade of everything going wrong.” Dr. Haar also told the Times that the EMTs who worked on Floyd “never recorrected course, even inside the ambulance.”

“As a physician, it’s always painful to watch something like this,” Thompson said in a phone conversation last Friday. “Being an emergency physician, my impulse is to jump in and intervene as quickly as possible. Watching the amount of time that passed without resuscitative measures being initiated was very disturbing.”

But while the delay in resuscitative measures may have contributed to Smith’s death, if the eight GPD officers who hogtied Marcus Smith had heeded the heeded the warning packaged with the RIPP hobble restraint, or those of their department’s own directives manual, those measures would never have been necessary.