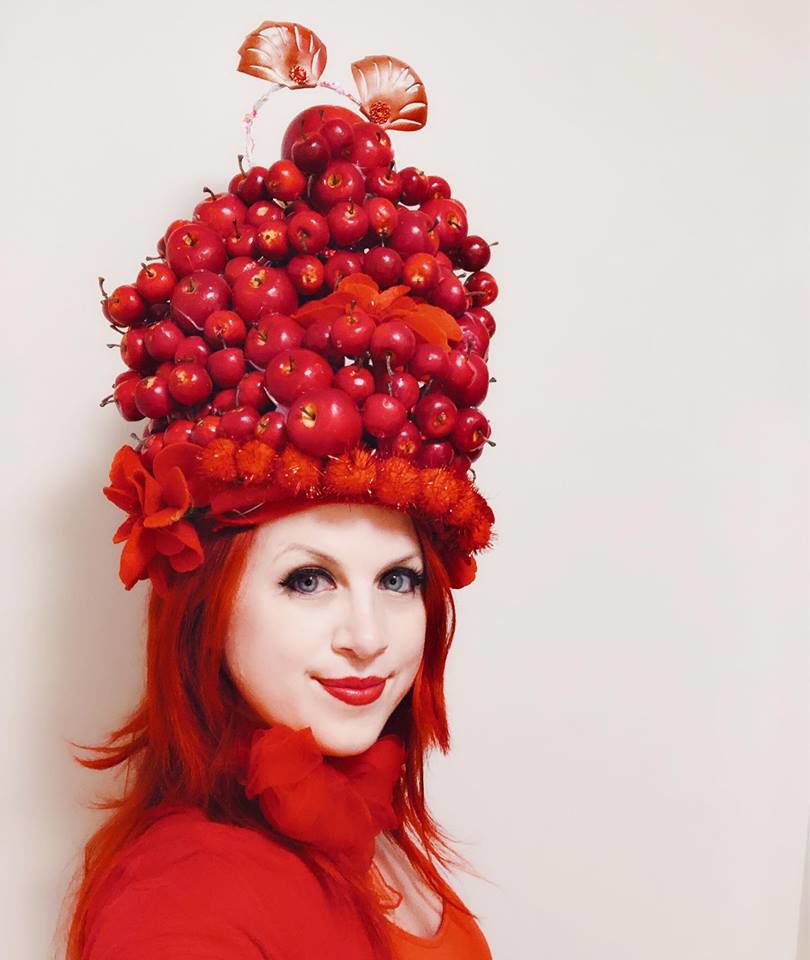 However, some educators and supporters could not make it to Raleigh last week. Most of those folks shared various outlets’ coverage of the march on social media or wore red in solidarity. One Greensboro woman took her support to a whole new creative level and made something she was known for making: a decorative hat.

Jessica Mashburn is a full-time entertainer/singer/songwriter/DJ/performer in the Triad. She wrote in an email that she has been making hats or fascinators as an expression for current events and whenever she is hired for themed events. She made the “Apple Hat” in solidarity with the #RED4EDNC march on May 16. Her picture of it on Facebook got over 300 likes.

Mashburn wrote that her “Apple Hat” is “reminiscent of a ‘Carmen Miranda-style’ fruit headdress,” except it is composed completely of artificial red apples. Mashburn wrote that she worked around eight hours total on making the hat out of steel and floral wire, faux apples, felt, poly-fill, glitter balls and hot glue.

“It’s hard to tell from the photo, but it actually lights up,” Mashburn wrote. “I wired in a string of battery power-rice wire lights for an added flair. Public school teachers made me ‘bright.’”

Mashburn wrote that she could not attend the march last Wednesday due to a performance, but she knew about 100 educators and supporters throughout North Carolina who attended and “kept up with them” on social media that day.

“I was very inspired by the mission and wanted to create something as an expression of my solidarity with public school teachers,” Mashburn wrote. “After all, I received all of my grade school education in public schools. I had such incredibly inspiring teachers that I still love to learn.”

Mashburn wrote that she supports #RED4ED because she has watched and experienced the “drastic decline of funding” in public schools.

“I find it strange that education has somehow become a major part of ‘identity politics’ and liberals like me want to fund public schools and conservatives want to de-fund them as much as possible,” Mashburn wrote. “That makes no sense to me because it’s unrealistic in a capitalist/free market economy that everyone will be able to afford private schools. It seems to me that a better-educated public/population would be able to contribute greater skills that generate more profit thus more people would have disposable income to spend. May I quote Eleanor Roosevelt? ‘It’s better for everybody when it gets better for everybody.’”

When Mashburn graduated high school, she wrote that she wanted to be a music teacher because she was inspired by her elementary school music teacher, Eleanor Nesbit, and her high school choral teacher, Maggie Gallagher.

“It’s my wish that they both know how much they enriched my life. Their spirits are always in my heart,” she wrote. “I know they sacrificed having a better paying job to do something that they loved. That I can relate to. My little music career has not made me rich, but I love what I do and I’m so grateful that I get to do it.”

After having to pay for her education at the University of North Carolina Greensboro herself (even after help from FASFA), she realized that she was either going to be in “major debt” to finish her degree or she needed to find a more affordable option. She then transferred to Sandhills Community College in Pinehurst, North Carolina, (where she grew up) and majored in music. There, she earned her Associates in Fine Arts with honors. She then planned to transfer back to a four-year school and also pursue her Master’s degree. But after looking up how much public school teachers were paid (even after getting a Master’s degree), she realized she made more money waiting tables (as she did in college to support herself).

“Why would I go into major debt to make less money?”

Mashburn got through tough times, traveled to new places and still has a lifelong bond with her classmates that would have never existed without musical education.

“I can remember practically every song that Eleanor Nesbit taught me at Alamance Elementary School,” she wrote. “Those songs still lift me up. When Maggie Gallagher was my choral teacher at Southeast Guilford High School, she taught me songs that got my mind off of the pain of my parents’ divorce and she helped me raise the funds that allowed me to go on the first major trips in my life: to NYC twice, Disney World and the Bahamas, all for choral competitions.”

She wrote that music education enabled her to find and express herself, which is a gift she wrote, that not everyone is given.

Mashburn encourages everyone to not be afraid of creativity and to “tell a great teacher that you’ve had ‘thank you.’”

“There’s music in every heart,” she wrote. “Please support the people that can teach us how to hear it.”

Katie Murawski is the editor of YES! Weekly. She is from Mooresville, North Carolina and graduated with a bachelor’s degree in journalism with a minor in film studies from Appalachian State University in 2017