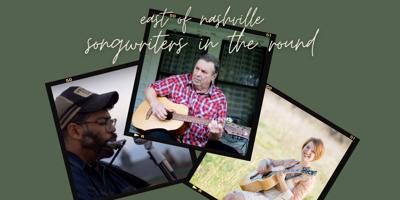 Seven years ago, while I was in grad school at UNC-G, I started a songwriter showcase at Tate Street, which then moved over to Gibb’s Hundred Brewing — the idea was to showcase the creative songwriters here in the Triad area. YES! Weekly was gracious enough to sponsor that project, too.

The Army took me overseas in 2016, and I stayed in Europe for a couple of years afterward — studying in England and teaching on a Fulbright in Romania.

The pandemic brought me back to North Carolina, and eventually, back to Greensboro in September 2020. Part of the reason I moved back here was the wealth of fantastic fellow songwriters and musicians here in this area, and I was welcomed back with open arms.

My 2021 album, Hot Pepper Jam, was a return to the old-time/bluegrass clawhammer banjo-driven sound I started off with, and it was recorded in Greensboro with friends from Black Rabbit Audio, the UNCG Oldtime Ensemble, and Piedmont Oldtime Society. Since then, it’s gotten play on public radio here in North Carolina and up in Virginia, as well as WUAG, WQFS, and WKNC, and taken me to stages at the NC Folk Festival, Fiddle and Bow’s Art and the Arboretum, and the Martha Bassett Show; this year, I’ll be doing shows with Greensboro Bound Literary Festival, Piedmont Blues Preservation Society, and Antlers and Acorns Songwriters’ Festival in Boone. And, of course, tons of breweries and other venues around the region.

And there’s another album in the works: I’m expanding 2018’s Peacock Feathers EP into a full album of songs based on Flannery O’Connor’s short stories, with their sideways view on the world of a South in transition.

Songwriting and storytelling have always been important to me, and I do my best to combine them in my music. I also want this showcase to be an opportunity to bring some of the best storytelling songwriters I’ve met around the region onto one stage to share with you.

They cover a wealth of genres, experiences and perspectives, from David Childers’ acoustic folk-rock to SunQueen Kelcey’s R&B to Aaron Pants’ electric rock to Emanuel Wynter’s electric violin-driven funk and blues. My aim for this series is to showcase a diverse mix of local, regional, and nationally acclaimed songwriters sharing their songs, stories and ideas behind them. Each show, held at the Crown at the Carolina Theatre, will feature a couple of Triad artists and at least one traveling artist, including some from neighboring states. Come and give them a warm welcome, and hear what they have to sing!

Billie Feather is a multi-instrumentalist and songwriter who splits her time between Durham and Winston-Salem, with regular travels back to her family farm in Johnstown, Pennsylvania. Her approach to music is as multi-faceted as the instruments she plays — guitar, bass, banjo, mandolin, and ukulele. She tours with bands, writes music for a folk band and a punk band, helps organize music festivals, is a luthier and guitar tech, has two undergrad degrees in guitar and jazz, and just finished her master’s at UNC School of the Arts in guitar, with a certificate in recording technology.

Her early years were spent moving around the country as her father took jobs with the burgeoning manufactured homes business, until they settled in NC in the mid-90s when he took a general management job at a manufacturing plant. Her parents bought her a toy keyboard and promised to pay for lessons if she practiced. She didn’t practice.

When Feather was 11, she wanted a guitar and “mowed all the lawns in the neighborhood” to earn money for one — she spent the first year teaching herself until her parents agreed to get her lessons. Local jams and gigs shaped her sense of music. “Dad would drag me to anything free in the area, and quiz me about the harmonies on my Beach Boys cassette.” Inspired by the music around her and jams in the mountains, she eventually started writing songs when “I couldn’t find music for songs I wanted to play.”

Eventually, she started taking lessons at the Community Musical School at Catawba Community College and then set her eyes on the UNC School of the Arts. She did her undergrad there, and spent the next 10 years “running around with bands.” Later, she went to North Carolina Central for a second degree in jazz, and this year, completed her graduate degree in guitar, with a certificate in recording engineering from UNCSA.

Her musical background is wide-ranging. From playing with Bo Stevens, John Howie and the Sweethearts, the Holland Brothers, and Charles Latham, she now plays with Hank Patti and the Current (she wrote two of the songs on their upcoming album “Letters”), heads up her folk project, Billie Feather and the Hallway Waltz, and a punk band, the P-90s. All three have albums coming out in the next few months.

Feather is a study in balancing and crossing boundaries. “For a long time, I had two sides of my musical self: acoustic musician and classical musician. And I had the rock band, where I’d scream and cuss and talk politics. But all those worlds are colliding now.”

Her thoughts are similar for academia. “It left me thinking about the purpose of the university, as I dealt with high school, undergrads, and graduate students, and seeing everyone’s hopes and dreams at different stages. I’d really love to empower artists to go into the arts world with more open eyes so they’re not taken advantage of.”

Some Say the World Was Made for Fun and Frolic

In my mind, David Childers is what would happen if Doc Watson played rock and roll or Bruce Springsteen played folk. When I first heard him, I thought of him as a folk artist, rooted in lyrical storytelling. When I saw him with his band, the Serpents, there was all that, plus the energy and attitude of a rock show.

“I’m very fortunate to play music in a way that doesn’t get stale for me,” he said. This is partly due to his combination of solo, duo, and band shows, but there’s also the wide range of venues. He regularly plays breweries around the state, but also opened up for the Avett Brothers at the Greensboro Coliseum in May and played Merlefest last month. In both cases, he said, “we felt like that’s exactly where we belonged. Just like when playing Free Range Brewing or Foothills or Little Brother.”

No matter the venue, he believes in bringing the best show he can. “I’ve made lots of records, had stuff on the radio, but live is where it’s at for me, getting to see people smile, and bring out the best in them.” Though he lives in Mt. Holly, he has deep connections to Greensboro. Watson has an MFA in Creative Writing from UNCG and lived here for years, coming up in the music world with such Greensboro mainstays as Bruce Piephoff.

“I was fortunate to be growing up in a time when a lot of good music was being produced and discovered — Dean Martin, Johnny Cash, Chuck Berry, John Prine. My mom and a relative from Colorado showed me a lot of great music, and Bob Dylan was the real kick in my pants, too.” His music, from the ageless acoustic meditation of “Greasy Dollar” to the rocking “Camp Latta Shuffle,” displays the fruit of all these roots.

East of Nashville Songwriters in the Round series, featuring David Childers, Billie Feather, and Colin Cutler will be held at The Crown on May 22 at 7 p.m. Hosted by Colin Cutler, the series will showcase a diverse mix of local, regional, and nationally-acclaimed songwriters sharing their songs and the stories behind them in the intimate setting of The Crown. The series is currently slated to run monthly through September. Tickets are $12 in advance and $15 at door. For more information, visit www.carolinatheatre.com.