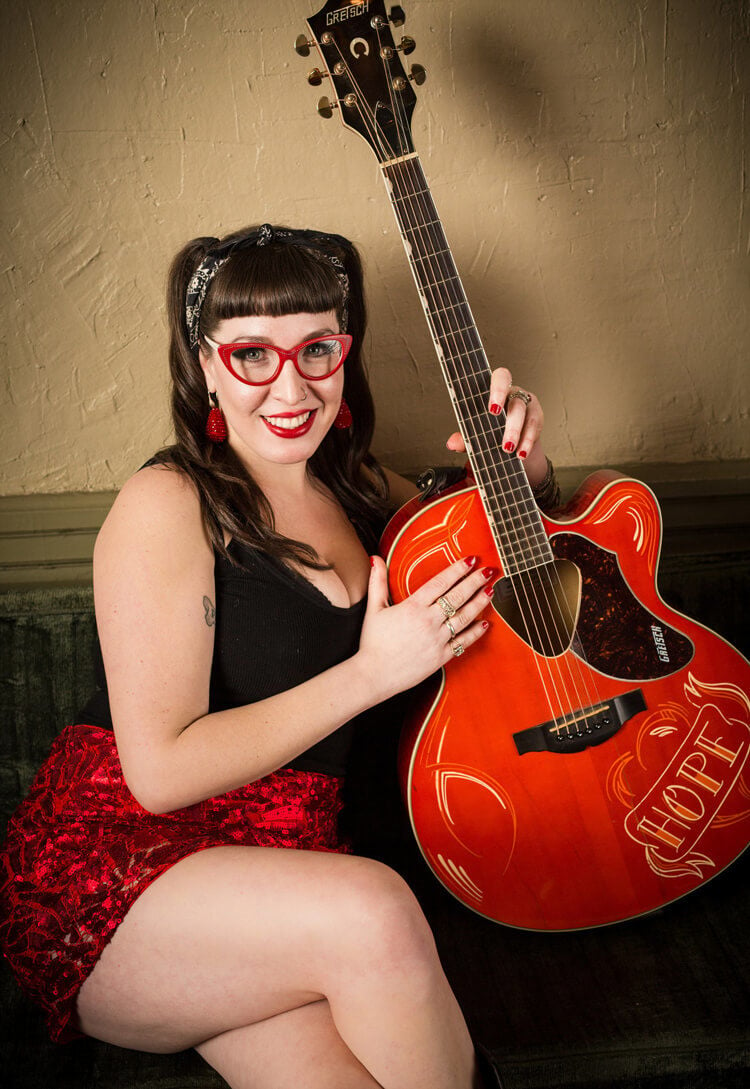 “I can confidently say that it’s my favorite event all year,” said Hope, the horn-rim-wearing frontwoman of Lara Hope and the Ark-Tones, a band based out of the Hudson Valley region of New York. Hope and her bandmates spend much of the year on the road, playing festivals and hot spots that celebrate what they call the roots rock ‘n’ roll culture and tradition.

Hope and her band will perform at Heavy Rebel Weekender at the Millennium Center in Winston-Salem on Friday, July 5, the first day of the three-day festival. Hope first came to the event as a spectator eight years ago, and she and her band have since returned as performers for seven years running. This year marks the 19th year of the event, which turns downtown into a celebration of the days before the Beatles.

Every music genre has its golden era or peak years. For fans of big bands, it might be somewhere around 1940. Many jazz heads view the year 1959 as being the pinnacle. For certain baroque music fanatics, music went precipitously downhill after 1750. Blues and old-time enthusiasts talk about recordings made between the years 1927 and 1937 as being a brief window offering a glimpse into a now-vanished world. If you worship psychedelic rock, your record collection probably focuses on music from 1969 and earlier. Connoisseurs of thrash metal might consider the mid-’80s to be the choicest stretch of time before true metal got corrupted. Some hip-hop purists turn their nose up at anything after the mid-’90s. Certain punks can be dismissive of post-1979 music. You could go on, mapping out portals into different musical universes, with one genre emerging as another flourishes and another declines. The point is, there are precise historical sweet spots.

Rockabilly is a semi-problematic term and one that a lot of artists never quite embrace as a genre description. It was a way of talking about rock ‘n’ rollers who had a hillbilly aspect, a country tinge, a little bit of twang and drawl to their combustible, jittery music. It suggested a crazed element, giving a worse twist to something that already had a bad reputation — rock ‘n’ roll. The term also often connotes a racial divide — the white end of the spectrum of early rock ‘n’ roll. All the same, many would say that rockabilly flourished from the time when Elvis Presley recorded his rendition of “That’s All Right Mama” in the summer of 1954 to about the time he was drafted in 1958, or maybe the following year when Buddy Holly died. Viewed that way, rockabilly had a short day in the sun.

But, as is the case with most creative summits, subsequent generations of fans and musicians picked up the music and did something new with it, fusing it with elements of gypsy jazz, punk rock, metal, holding onto aspects of a unique tradition while tweaking the components and upgrading the sound for a contemporary reality. Bands like the Cramps, the Stray Cats, the Flat Duo Jets, and Reverend Horton Heat all took the germ of rockabilly and ran with it. Expect to see a lot of variations on raw early rock and roll at Heavy Rebel. (Dex Romweber, the hyper-animated guitar wizard behind the Flat Duo Jets, will be playing, as will dozens of other artists.)

In addition to the music, there will be mud wrestling, a Big Wheel race, a Pabst Blue Ribbon drinking contest, a Krispy Kreme donut-eating contest, and other themed events. And, fashion-wise, if Rosie the Riveter and Gene Vincent are your style icons, you’ll feel very much at home at Heavy Rebel.

But don’t get the idea that Heavy Rebel and the rockabilly scene are a monolithic world of old cars, denim, ducktails, slap-bass and nostalgia. For their part, Hope and her Ark-Tones blend a fair bit of country, jazz-crooning, Latin and other elements into their sound. And Hope’s songwriting often focuses on the pleasures of humble simplicity.

“I’m sick of songs about partying and cars and heartbreak,” she said.

Instead of singing solely about hotrods and romance, Hope has several songs that celebrate the freedoms of doing what you love and appreciating the routine joys of a life well-lived, even if it means eking by without a lot of cash. The song, “This Is What I’ve Got,” off of the band’s 2017 record Love You To Life, is sort of a mission statement about taking stock of how many of life’s best things don’t really require money.

On a similar theme, the band’s 2014 record, Luck Maker, embraces the idea that we create our own good fortune in life by having the right attitude, working hard, and being open to the good things right in front of us.

As a sort of demonstration of her look-on-the-bright-side world view, Hope recounts how a fall down a set of stairs in California earlier this year forced the band to cancel the remainder of a tour and hobbled the singer with a cast and crutches for several months. But, she said, even though it was not a great thing to have happen, the injury ended up offering her some downtime, and seeing her impairment on stage gave many fans a way of sympathizing with the singer and opening up new conversations.

“It’s been kind of a cool way to connect with my audience,” Hope said.

See Lara Hope and the Ark-Tones at Heavy Rebel Weekender, Friday, July 5, on the main stage, at the Millennium Center, 101 W. 5th St., Winston-Salem. For ticketing information and a complete schedule, visit heavyrebel.net.