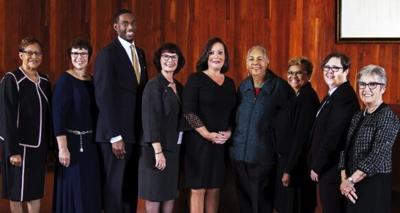 The last week has been filled with announcements as incumbents and challengers alike toss their hat in the ring for a seat on Greensboro City Council.

While the candidate-filing window for the Guilford County Board of Elections office doesn’t open until this summer, many on and off council have made their intent clear recently regarding public office. With all nine seats up for reelection this upcoming 2021 election season, there are sure to be many more players to come to the table.

Governed by a Council-Manager form of government, the eight council members and a mayor serve four-year terms. The mayor and three council members are elected At-Large, while the remaining five are elected from districts throughout the city in its nonpartisan election.

Mayor Nancy Vaughan has declared that she plans to run for another four-year term.

Vaughan, who has held the position since 2013, announced via video that she chose Valentine’s Day to announce her candidacy “because I love our city and I know that you do too.”

Vaughan reassured residents that she has proven she knows how to get things done and reminded them of all they’ve been thru together - tornadoes, floods, earthquakes, and other disasters.

“I’ve been your voice for better jobs, safer communities, affordable housing, and equal opportunities. You know me. I have without a doubt proven I know how to get things done,” she said. “My energy and attention has always been and will continue to be, focused on the real issues that impact our city. On that, you have my devoted commitment. Always have and always will. I will continue to lead by example and listen to the heart of our community.”

She went on to say that the issues important to residents are also important to her - safety, economic recovery, and housing, etc.

“The people of Greensboro have always come first and always will,” she said. “You matter. Your family matters. This city matters. I love our city and the people who call Greensboro home.”

As of now, she faces at least one challenger, albeit a familiar one, in City Councilman Justin Outling. A lawyer at Brooks, Pierce, McLendon, Humphrey & Leonard L.L.P., practicing business litigation and white-collar criminal defense, he is the only male on the current council.

Outling, who was appointed to fill the seat vacancy in 2015 after then council member Zack Matheny stepped down, announced in December 2020 via Facebook that he would be running for the Mayor’s seat.

“The gap between Greenboro’s potential and reality is broad, and it’s been getting wider year after year,” he said in the video. “As a member of the Greensboro City Council, I know that my colleagues and I have worked hard to tackle each of those challenges. But in that role, I also know to reach our potential, we need a stronger, more effective, and a more unified voice in the Mayor’s office. And that’s why I’m running for the opportunity to serve you as Greensboro’s next mayor. Greensboro needs strong leadership for real progress.”

With Outling’s District 3 seat opening up, attempts are already being made to commandeer the coveted space on the dais.

Challenger Tracy Furman took to Facebook earlier this week to announce that she would be vying for the seat. Certainly not a stranger to Guilford County or the Greensboro area, Furman is executive director of the local nonprofit Triad Local First, a 501 (c)(3) nonprofit organization based in Greensboro that promotes and strengthens the economic growth and sustainability of local, independently owned businesses, according to its website. A position that could work to Furman’s advantage.

“Our independent business owners are our neighbors and friends,” she said in a release. “Our community is stronger when our small business economy is thriving.”

In 2018, Furman also ran for the District 3 Guilford County Commissioner seat against Justin Conrad, where she garnered 49.62 percent, or 14,119, of the votes leading to a recount of the district’s votes with the 0.7 percent difference. A 216 vote difference led to Furman conceding and the race being called for Conrad.

According to Furman, she plans to make safety and affordable housing a priority if elected to council.

Challenger Chip Roth announced he would be running for the seat in early January. Roth is another that is no stranger to Greensboro or its politics. Some may even say he has somewhat of a home-field advantage.

Roth is the husband of Denise Turner Roth, who served as Greensboro’s City Manager from 2012 until 2014 when she resigned to work in D.C. at the White House under the Obama Administration. He also served in the Obama administration as a senior advisor for the U.S. Small Business Administration.

Between his prior SBA knowledge, his work at NDH Capital, and as a founding partner of Roth & Associates, a business consulting firm that assists other businesses with business development, it comes as no surprise that Roth’s campaign touts a focus on economic development for the city.

Roth’s vision is one he bills as a “New Greensboro”, a city that includes people working, a thriving economy, and new opportunities for everyone. “He is focused on business success, but always puts people first,” and is “an independent, progressive fighter for families and small businesses,” according to the campaign website.

The city will see a familiar face in its District 5 as Incumbent Tammi Thurm has announced her reelection bid. Having held the seat since 2017, Thurm currently serves as the elected official to the Jordan Lake One Water Alliance, on the board of Greensboro Downtown Parks, Inc., on the Transportation's Advisory Council, as an alternate on the Convention and Visitors Bureau, and has served on the Greensboro Minimum Housing Standards Committee and as Vice President of the Greensboro Jewish Federation.

According to a release, Thurm has focused on supporting safe and affordable housing, working with neighbors, local businesses, and developers to promote growth, and providing residents with prompt services, along with helping the community fight through tough events in the last year. A law firm administrator, Thurm vows to “remain committed to ensuring” a stronger Greensboro.

“When I look at all we’ve accomplished these last three years, combined with the unique challenges that will face us the next four, I am more motivated than ever to serve the people of the 5th District so we can finish what we started.”

The Guilford County Board of Election will begin accepting Greensboro candidates’ filings at noon on Monday, July 26 thru noon, August 13.

Primaries will begin on Tuesday, October 5, with the general election to follow on November 2.