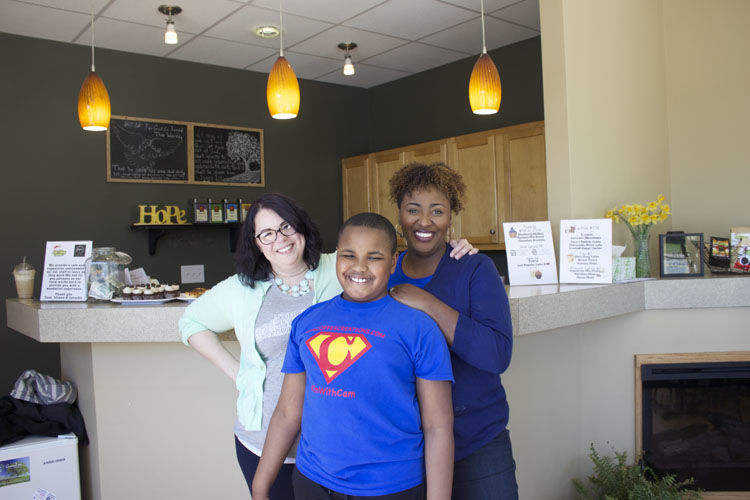 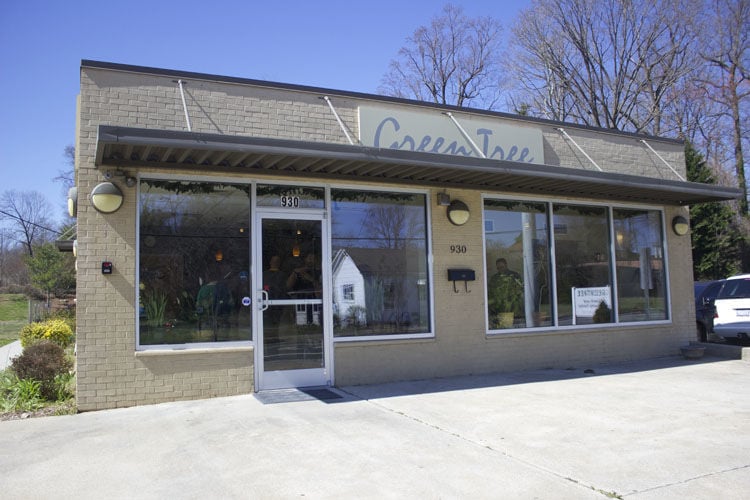 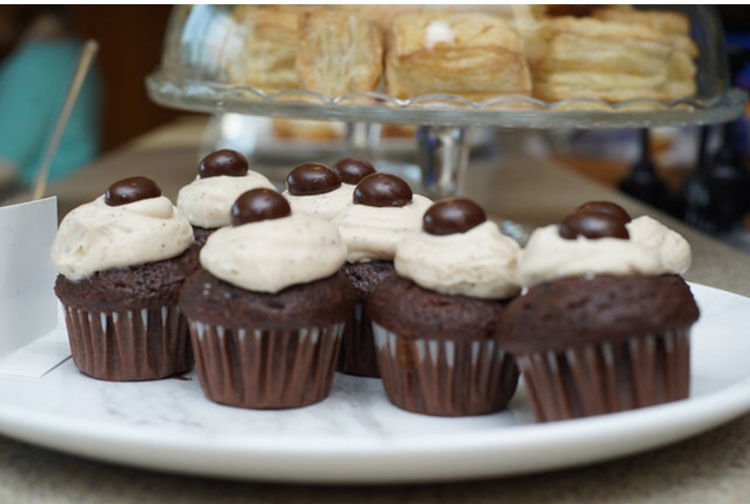 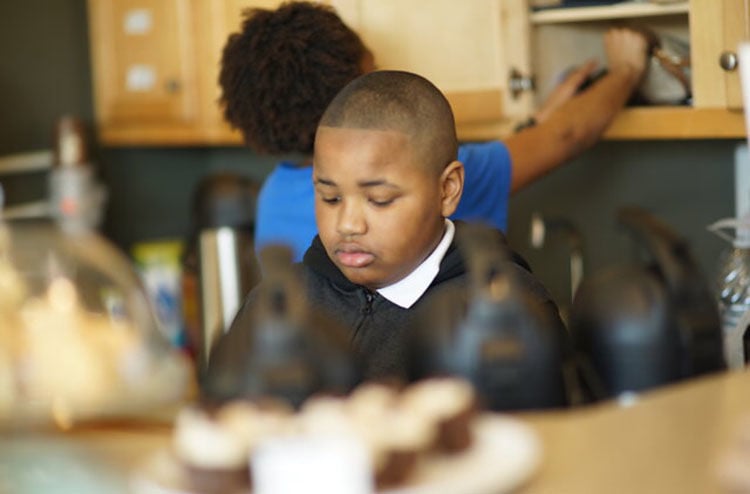 Camden Myers helping out behind the counter

Camden Myers helping out behind the counter

Camden Myers likes soccer, basketball and anime (specifically Naruto). He loves superheroes, and despite the Superman likeness of his logo, he said he prefers Batman. Myers is the 9-year-old co-owner and creator of Cam’s Coffee Creations, a different kind of coffee shop operating out of the Green Tree Church and Community Center, located at 930 S. Broad St. Cam’s Coffee Creations sells coffee and baked goods with partner, Bespoke Confections; but not only that, the shop also trains and employs students with special needs.

Myers said his favorite coffee that Cam’s Coffee Creations has to offer is the “Cam’s Cookie Craze” in which he says, “tastes like a chocolate chip cookie.”

Myers is a child with special needs; his mother and co-owner and operator of Cam’s Coffee Creations, Latasha Lewis, said Myers sustained a traumatic brain injury while she was in labor with him.

“During labor, Cam suffered a traumatic brain injury due to [the use of] forceps and a vacuum to try and get him unstuck from the birth canal,” Lewis said. “He was a 10-pound baby. The thought, in hindsight, is that he suffered the injury through that process.”

Lewis said her son also sustained nerve damage in his right arm as well, which she knew about. However, she said no one did a neural exam on Myers after he was born. Lewis said Myers only received an actual diagnosis for his condition about two years ago.

“He has always had the deficit,” Lewis said. “But no one could tell us why and eventually a doctor did a neural work up, and that is how we discovered the injury.”

However, since Myers did not have a diagnosis until he was almost 8 years old, Lewis said he did not get the appropriate resources for his deficit. Which then led to the creation of the coffee shop.

“We started this as a hobby,” she said. “We were already kind of doing this as a hobby to help him overcome some of his deficits and then it progressed into a business.”

Lewis said they did not have any intentions of getting into the coffee business. Lewis is completing her Ph.D. in curriculum instruction and assessment at Walden University. She felt that Myers would do better in a non-traditional, informal learning environment.

“So it was just a way to give him opportunities to work on his deficits,” she said. “Like communication, math skills, reading skills in a nontraditional or informal learning environment. We had no goals or aspirations of working with other families or having a full-fledged coffee shop or learning program; we were just trying to get Cam in better shape.”

Once Lewis saw a noticeable improvement in Myers, she wanted to give back to the community.

“We basically wanted to be able to help families feel and achieve the same success that we had, and we honestly started this as a way to give back to the community,” she said. “Cam running his own business had a profound impact on his ability level and confidence. So we achieved lots of things working in the coffee shop that we could not achieve with all the therapy and programs that we have been in. So it was actually Cam’s idea to grow the business and let in other individuals with special needs.”

Lewis said their business does not make much profit because Myers likes to give it away.

“I like helping people, and I like making nice coffee,” Myers said. “I like donating to people who don’t have food or a car or anywhere to live.”

“He gives away a lot of the money he makes to different charitable organizations in our city,” Lewis said. “He mainly likes to address homelessness.”

After only being open for a month, Lewis and Myers are impressed with its progress. On the grand opening on March 14, Myers and Lewis said the shop sold 100 cups of coffee.

However, Lewis said the mission of Cam’s Coffee Creations is what drives the company, not coffee sales. Lewis said the coffee is used as a means to accomplish the goal, which is to help students with special needs of Winston-Salem and Forsyth County Schools, become aware of their ability levels, teach them how to advocate for themselves and how to find support for themselves.

“Our philosophy is that individuals with disabilities can achieve any and everything, if as a community, we rally around them and if we remove their limits,” Lewis said. “Assuming that people with disabilities are limited is because those of us who are responsible for their care and service, we give them limitations. We tell them what they can accomplish. We decide job choices for them. We decide programs for them and often times we don’t hear their needs. We don’t hear their dreams, and we don’t try to create better situations for them. So the goal of Cam’s Coffee Creations is not to create baristas, it is to create empowered individuals who know how to advocate for themselves to go out and then live the life that they want to live.”

Lewis said an example of the shop’s philosophy is seen through one student who works with them. Lewis said he wants to be an artist and to support that dream, Lewis said Cam’s would hang his art on the walls to inspire and help him continue to follow that dream.

“Coffee is the tool to give them self- confidence and give them real-world skills, but the goal is to not have them work with us forever,” Lewis said. “The goal is for this to be a stop on their journey and then find the path on their way to happiness and fulfillment.”

“Part of that process is that they have to have so many job training hours in order to receive their certificate and there are places throughout the city that will employ them or give them internships or opportunities,” Lewis said. “But some students are harder to place than others. So we typically work with students who have a harder time finding placement in a typical organization.”

Lewis said the shop focuses on students whose abilities are more profound or severe. She said there are a variety of students with physical, mental and emotional disabilities that she and Bespoke Confections’ owner Jiliana Dulaney works with.

“Currently we have three students from the school system,” Lewis said. “We also have three individuals with special needs that we were working with part-time prior to opening the shop.”

Dulaney said she employed someone with special needs at her former chocolate shop, Haute Chocolate in 2011.

“When we hired him, the state of North Carolina gave him the job choice of janitor,” Dulaney said. “And he was a terrible janitor. So I was like ‘we are going to keep you, what do you want to learn?’ ‘What can we do to make this beneficial for both of us?’ Each time he would come in, I asked what he wanted to learn.”

Dulaney said watching him grow from the time he started to when the chocolate shop closed its doors, “it was like a huge transformation. Night and day, the person was not the same.”

“When he started he was a janitor, and when we left he was ringing people out, taking cash, credit cards, making chocolate with me, making coffee drinks, everything we needed,” Dulaney said. “Seeing how people treat the clients that I had just because they had Autism, I had a really bad experience with one employer, and that was the catalyst for this. I got so frustrated because it was blatant discrimination.”

Claire Athens is a current member of Bespoke Confections who works with Dulaney.

“We bake, and one of the things we are working on is social skills because Claire has had a lot of difficulty with socializing with people,” Dulaney said.

“I like it here, it is small but fine,” Athens said about the coffee shop.

Dulaney said that Bespoke Confections is focusing on mini desserts because she wants people to have more variety. She said people could get a cup of coffee from just about anywhere, but what makes Cam’s and Bespoke different is the experience.

“What makes us different is the mission,” she said. “You get to see the skill building in real time; you get to see Claire meeting new people.”

“We have separately developed our own coaching programs, and so the goal is to develop a program together,” Lewis said. “To be able to offer an employment program that allows students to leave us and go on to do greater things. So that is what we are currently doing, combining our training efforts to roll out one program that will reach students and more adults in the area.”

Dulaney said both her and Lewis are about to implement at 52-week curriculum together.

“So that the skills that each person learns is the exact same thing,” she said. “So they are getting the same kind of training each time.”

Lewis and Dulaney believe that every community needs a Cam’s and a Bespoke because too many helpful institutions are separated from each other.

On April 11, Cam’s and Bespoke are hosting a photography course, where local photographers will donate their time to teach the students of the coffee shop how to take photos. The shop plans to showcase the photographs and construct a sidewalk exhibit with what the students create.

“Again, we are trying to be more than just a place to get great coffee,” she said. “It is really good coffee, but we are really trying to be an active part of the community.”

Lewis said due to such limited staff, Cam’s Coffee Creations is open on Mondays, Wednesdays, and Fridays from 7 a.m. to 12:30 p.m. She said she is always looking for volunteers and hopes they can get a crew together to be open more days soon.

Myers said he hopes that as the coffee shop starts to grow so that they can get in their own space instead of just renting from the Green Tree Church and Community Center. Myers also has high hopes for a mobile coffee shop, or “coffee truck” as he called it. Lewis would like a bigger space to run the coffee shop with room for classrooms to offer workshops and classes consistently. Myers said he wants to go to college one day to be a family doctor. His advice for others with special needs is, “If you fail, get back up again, never give up and always try.”

If you are a parent of a child with special needs, visit Cerebral Palsy Family Network for useful information and helpful resources.