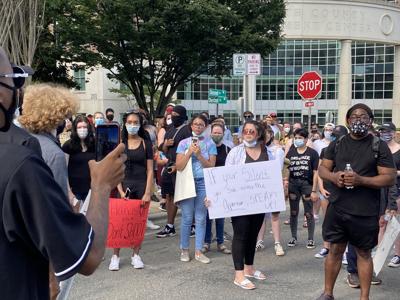 “I am sick and tired of being sick and tired,” said Civil Rights activist, and Mississippi sharecropper Fannie Lou Hamer on Aug. 22, 1964, after describing in detail “the vicious 1963 beating in a Mississippi jailhouse that left her with severe kidney damage, a blood clot behind one eye and a permanent limp,” according to Daily Beast author Lottie L. Joiner. The people of the Triad demonstrated this weekend (and are still demonstrating) that they, too, are sick and tired.

As the nation mourns the killing of George Floyd by now-former Minneapolis Police Officer Derek Chauvin— who has since been fired and arrested on charges of third-degree murder and manslaughter— activists in the Triad made their voices heard this weekend, with a series of protests and movements.

On May 31, folks of all ages, creeds and races gathered in Winston-Salem’s Aster Park for the movement “Black Ops: Rebellion of Black Women.”

“The gathering by the ‘Black Ops: The Rebellion of Black Women’ is a call for justice, safety and equality in the city of Winston-Salem, ” said Ikulture Chandler, one of the speakers of the movement. “This is a calling, an urgency for black women. We are encouraging our black men to stand with us alongside people in the Winston-Salem area and to hear us say proudly— we are tired, and we are tired of being tired. Understand that we will be heard in unity, and we want justice. We want our black men to be able to stand up for women— Julius Sampson. We want our women to be safe and protected—Ella Crawley. And yet, due to COVID-19, our black men and women are dying with no affordable health care. And we sit back and watch millions and billions of dollars going to Downtown Winston-Salem. Why are our cities, public schools and homes in our communities suffering? We want to know why. Why is nothing being done about those things? Change needs to take place. And we are calling for our women to stand in solidarity with us—our men to stand in solidarity with us so that we can see that change and those results become our new reality and new normal.”

The movement was organized by local activist Miranda Jones, and military veteran Arnita Miles, and some of the speakers included minister Terrance Hawkins and Nation of Islam minister Effrainguan Muhammad. Councilwoman D.D. Adams was also in attendance and encouraged the community to come and be heard at the Winston-Salem City Council’s first in-person meeting since the COVID-19 pandemic on June 15 at the Benton Convention Center. Project Mask WS members were also at the movement handing out masks to those attending.

Later that day, more than 100 people marched up and down the streets of downtown Winston-Salem to the courthouse to lay down in the street for over eight minutes, in observance of Floyd, who died of “asphyxiation from sustained pressure,” as Chauvin knelt on his neck for eight minutes and 46-seconds.

Some called out for their moms. Some screamed, “I can’t breathe.” Some wept. Some were quiet. It was, perhaps, the most emotional scene of my career.

At “Black Ops,” Hawkins encouraged white people in attendance to peacefully assemble and stand up for black lives in their communities.

I wholeheartedly agree, and would like to give a personal note to white YES! Weekly readers:

The time of virtue signaling—half-reciting Martin Luther King Jr. quotes on social media and tone-deaf crying that “all lives matter,” is over— as white people, we need to do more than offer our thoughts and prayers. We need to donate to local bailout funds, educate ourselves and others, support black-owned businesses, vote and bring food/waters to protests. Restaurant owners can take a note from Crafted’s Kris Fuller, and give away food to those peacefully demonstrating. Artists can take a note from Gina Franco, who has been painting the boarded-up windows of downtown Greensboro and spreading positivity through her colorful paintings.

Above all, we need to listen to our African-American neighbors and not minimize their experiences. We need to practice empathy and stand with them.