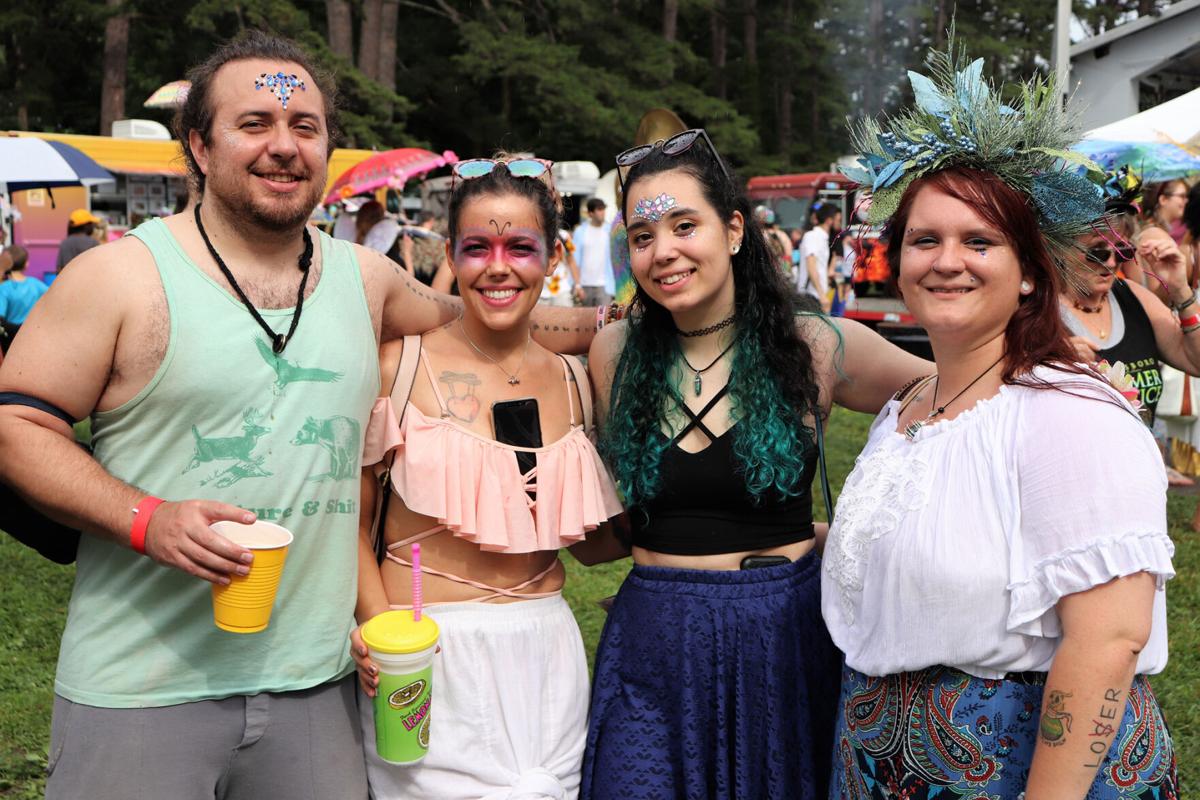 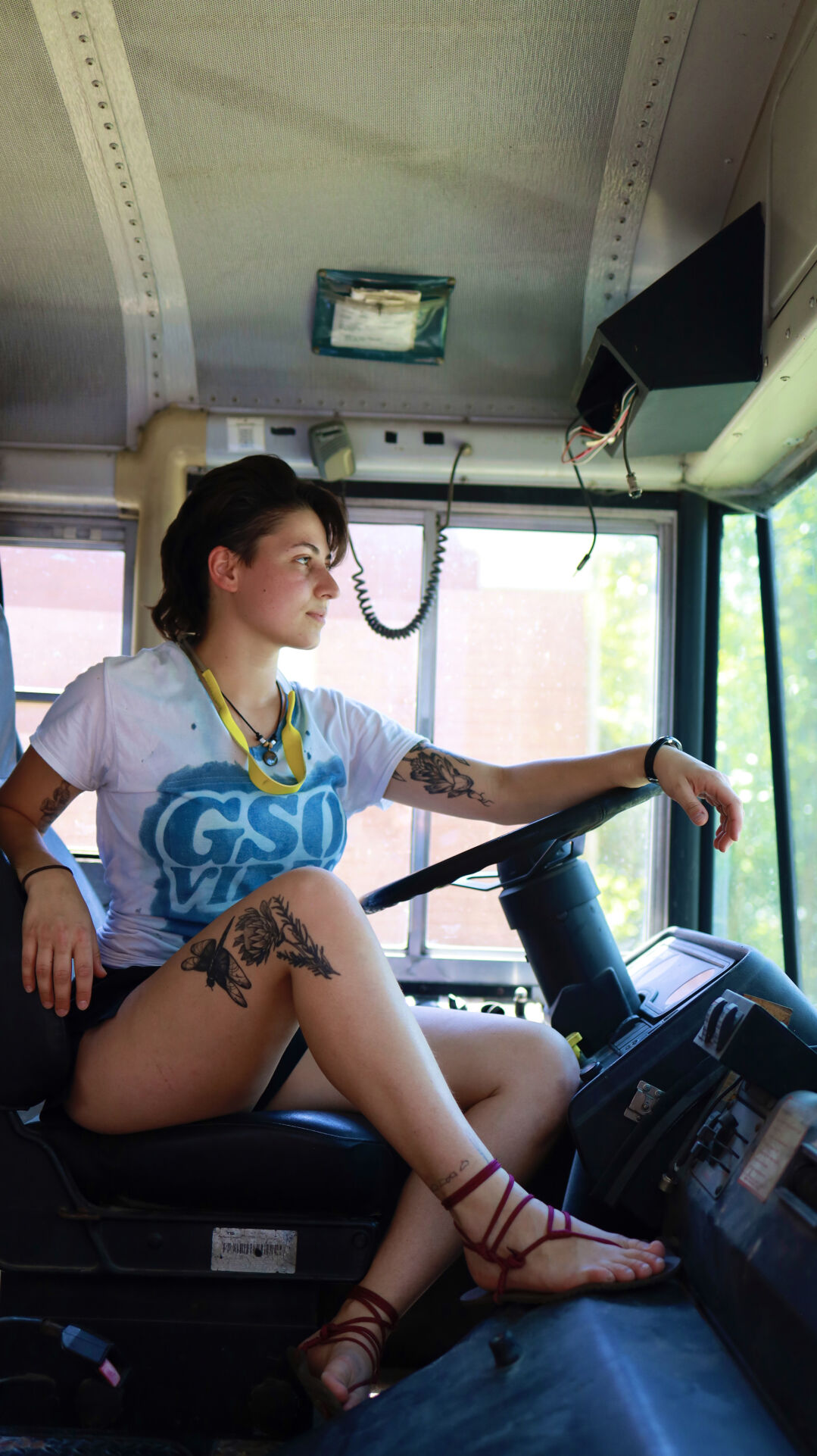 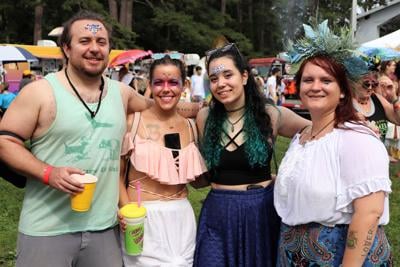 When Andrea Santolim Geller graduated from UNCG last month, she bought a mobile office and studio that she also intends to live in. It’s a 40-foot-long classic yellow Thomas Built school bus with a Cummins engine, and she’s named it Bailey. As the mobile headquarters of LemonThyme Studios, Geller’s new business with Kevin de Miranda, Bailey will play a major role in the 2021 Greensboro Summer Solstice Festival, which runs from 2 to 10 p.m. on Saturday, June 19, at Lindley Park & Greensboro Arboretum.

“I’ve wanted a mobile lifestyle ever since my family moved to the United States,” said Geller, who was born in Porto Alegre, Brazil, and spent the first part of her life on that tropical island before coming to Greensboro, where she attended Weaver Academy, Appalachian State, and N.C. A&T before graduating from UNCG’s Political Science Program.

“Because we regularly went back and forth and I really enjoyed alternating between two different countries and cultures, I became obsessed with travel,” Geller told YES! Weekly. “I took a drafting class while also doing research on tiny homes. My teacher, Ms. Osborne, was really close to the construction department teacher, and one day, I said we should do a tiny home, as it’s faster, allows the entire student body to explore different things, is really useful, and, I told them, you can either keep it to use as an example, or you can donate it to someone. That began a tradition, and the Weaver Center construction department has now completed at least two tiny homes, one of which the Tiny Homes Coalition of Greensboro donated to someone in the city’s homeless community.”

As graduation approached this year, Geller was ready to take her obsession with small mobile living spaces to the next level.

“As my last semester began, I started looking for a bus and bought Bailey. The alternatives were a van or a truck and trailer. The latter was the only alternative I considered, as I want this to be a house I can live in for a while, with the space to do art. Some mobile dwellers are cool with only a computer desk, but I paint and draw, and need space for an easel and tarp.”

Then there was the financial aspect.

“A bus is just one asset, whereas a truck and trailer would be two and would require me to build a structure from the bed of that trailer. And I’d need to have the paperwork for each individual asset, the truck and the trailer, to be able to own it, register it, insure it, drive it, park it, take it across state lines, whatever. With the bus, it’s all in one thing.”

Geller said that, while she intends to eventually insure it as a mobile home, she’s only insuring it as a commercial vehicle until she can build permanent living and cooking facilities inside it. “And, as I have a videography company with my friend Kevin de Miranda, Bailey is currently a commercial vehicle for that company, LemonThyme Studios.”

That company came about after Geller asked de Miranda, “can you teach me how to do all that video stuff?”

“I had been doing freelance videography work for about a year,” said de Miranda, “and we were looking for a creative project to develop, to teach ourselves how to tell a story better. So, we started making these videos about local businesses. First at M’Coul’s where I work, and then other restaurants and places we liked going to, and that turned into a series of stories where we went out and captured the experience of things happening in this city. And now it’s turning into something where it’s the name under which we’re doing things for the festival and other events.”

One thing they both wanted to capture on video was the sheer variety of the Greensboro Community. Geller said their original idea was “to do a tabling thing on Elm Street,” using the common term for the practice of setting up a table in public spaces and handing out information or asking questions. “We figured we’d encourage people to sit down and tell us their story, and we’d record them on the spot. Then somebody, I forget who, mentioned taking the bus to festivals. I thought about how the Solstice festival was the next big one coming to town and reached out to its administrators, Ling Sue Withers and Susan Sassmann, and they embraced the idea with open arms. It just seemed like such a natural idea to take the bus and make it a portable recording studio for telling us your story from Greensboro. It’s going to be so awesome.”

Geller said that, besides recording the stories of anyone who wanted to sit down and talk about Greensboro, she and de Miranda would be selling t-shirts and bandanas, both printed and hand-made using cyanotype and stencils, “which is a cool technique that gives you a really different texture and style.”

She also said, “we’ll have Carli, a Lyra dancer,” referring to a form of aerial dancing and acrobatics using a suspension apparatus resembling a steel hula hoop hanging from a crane, ceiling, or other support. This performance art, also known as aerial hoop dancing or circeaux, began in the late 1800s and was popularized in the early 21st century by Cirque de Soleil.

“We’re going to have a station for people to paint the bus,” said Geller. “For which we’ll make paint available to them. We’ll also have a Tarot booth, a henna booth, and people selling jewelry, prints, and saplings of herbs.”

Of course, the bus will be only one of many attractions at the Solstice Festival, which will include food and beverage vendors (with wares including beer, cider, and wine), a market bazaar, a drum circle, two entertainment stages, and a fire finale. For more information, check out greensborosummersolstice.org.