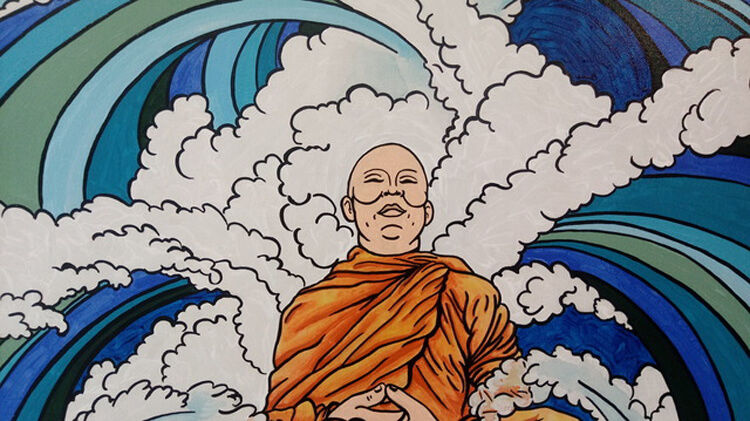 Art for Art’s Sake Group in partnership with the Red Dog Gallery is hosting free art markets that include up to 20 AFAS artists selling their wares at the ARTivity on the Green Art Park in Winston-Salem on Saturdays along with free music on Friday evenings. AFAS events are open to the general public of all ages.

Harry Knabb, AFAS group chairman, and chief executive officer is a native New Yorker who relocated to North Carolina to work for Hanesbrands. He said the arts scene in Winston-Salem reminds him of Greenwich Village in New York City. Knabb, who has been with AFAS from the beginning 12 years ago, said that since he has been in Winston-Salem he has seen a significant change from the days of craftspeople and potters, to the last couple of years with so many galleries and “2-D accomplished artists popping out of the woodwork.”

Knabb said that the AFAS Group proudly sticks to their mission-branding statement, “We build, educate and celebrate community through art,” in every decision they make and it has served them well. He said that for everything that comes along, it has to fit one of those three objectives or else they don’t do it. He said they have been very fortunate in their fundraising as a nonprofit by being consistent and by not charging artists to show their work aside from a small commission the Red Dog Gallery receives from art sold in exhibitions. He said that people don’t mind giving money when they see how AFAS “sticks to the plan” with successful results. AFAS’s intention was and still is, Knabb said, geared to keep the downtown arts district alive by moving toward the Innovation Quarter, “to combine all the elements and build up the emotion quotient on Main Street.” Knabb said that AFAS was made possible by gifts from several supporters after a group of artists, teachers, mentors and lawyers who got together to help artists in Winston-Salem. AFAS has grown to include more than 600 artists.

Knabb said the ARTivity markets evolved from the Arts on Sunday and continues to reserve spaces for 15-18 artist’s tents. ARTivity On The Green is an art-themed park with a bandstand and 13 “misting” lighted towers on Liberty Street, between 6th and 7th Streets, in downtown Winston-Salem and is located in the front yard of the AFAS Group building. Knabb said that the design of the mist was recreated as a silhouette of R.J. Reynold’s heritage using mist from water instead of smoke. “It’s so much fun to watch and listen to the kids laughing and running around,” Knabb said. The park’s mural wall is repainted white every May with 11 rotated artists who “get to go at it.” The park can be scheduled for concerts and festivals (see details online). (Free live music for tips by local musicians are featured in ARTivity after Dark. Bands can reserve the stage by contacting Heath Combs on Facebook.)

Knabb said while you’re at the ARTivity Studios, plan to visit the AFAS artist-juried exhibition “2019 Unbound and Unleashed” from the Downtown Arts Association Gallery Hop show that celebrates published works of literature through art inspired by nonfiction, a novel, poetry, biography, a comic book, essay or music. This show is located in the Red Dog Gallery on the first floor along with Studio 2, privately owned by jewelry and fiber artist, Julie Knabb.

The Unleashed Arts Center caters to young people, and emerging artists providing classes, workshops, outreach programs, and is on the second floor of the AFAS building.

AFAS has a lot going on from third Saturday Salsa Socials from 7-11 p.m., open to all ages for $12, to Hip-hop Yoga on Mondays and R&B Yoga on Thursdays. ArtAbout hosts open studio portrait painting sessions on Wednesday evenings along with a Preschool Art Experience on Tuesdays from 9-10 a.m. and an after-school art program, “Art at the Heart,” every Tuesday from 4-6 p.m. On Aug. 20 from 6:30-9:30 p.m., back by popular demand are ArtAbout evening events.

“Lock Yourself Into the Arts” allows participants to design their own locks to celebrate life events such as births, marriages, graduations and birthdays. Participants attach their painted lock to the four-sided gridded Archway that Knabb said they had was built five years ago at Cherry and 6th Streets, and then they toss the key in the Archway base.

The AFAS Group’s public art initiative continues to bring art into people’s daily lives with several public art events each year. The Art Towers are being rotated with new art, and more Mannequin Shenanigans are in the works. Knabb said their new event this October is called “Boo in the Park” and will take place the Saturday before Halloween with live bands and a smoke machine and other fun stuff for kids.