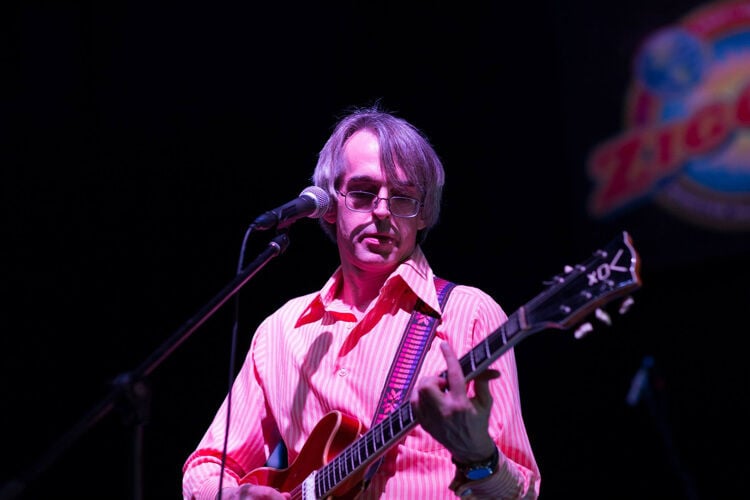 Patrick Womack, guitarist for The Cryptics

Patrick Womack, guitarist for The Cryptics

After Charles Womack, the publisher of YES! Weekly and Jamestown News, lost his brother, Patrick, to cancer this August, he wanted to immortalize Patrick’s memory and his passion for music. So, Charles and his family set up a musician scholarship fund in Patrick’s name and raised $3,235 through GoFundMe. Outside of the GoFundMe, Charles said the fund had received an additional $25,000, with more donations continuing to roll in.

According to the GoFundMe page, “The Patrick Womack Music Scholarship Fund has been established to help young musicians in the Triad of North Carolina with funding for quality musical training and instructional classes focusing on, but not limited to, classical and jazz music. Patrick loved all types of music, but later in life fell in love with classical music. And though he was an accomplished player, he began taking piano lessons, and his knowledge and passion were reborn. Through this rebirth of musical awareness, Patrick felt strongly that all musicians could benefit from quality instruction and music education, and wanted to help others benefit as he did. ‘The money can’t go to bands. Bands break up,’ said Patrick. ‘It has to be for music education and instruction. But if there’s a student who’s really deserving and is having to borrow or rent an instrument, we can buy them one.’ With those words, he stuck up his thumb in a very positive gesture of approval.”

Alexander is originally from Patrick and Charles’s hometown of Danville, Virginia, and he said his parents chose the cello as an instrument for him to play.

“I really like how the cello sounds and the actual parts you are playing of the cello,” Alexander said. “A lot of the parts are just keeping the beat for other instruments, but when the cello gets a solo part, it sounds really good.”

Alexander said he enjoys playing classical music on his cello, but he also enjoys the pop songs he learns with his class as well.

“I am excited because we can use this money to get a new cello and a case because the case that I have for my cello is fabric,” he said. Alexander explained that he would also have to get different sized cellos as he grows. The cello he will get now through the use of the scholarship funds will last him until he goes to college.

“We are very appreciative,” said Stacey Carpenter, Alexander’s mom. “It is great that it has come full circle because of the connection from Danville to Greensboro, and some of the family members knowing Patrick.”

Stacey described her son as always making good grades in school and always having an artistic side. She said he would memorize songs when he was little and sing them. His father, Joe Carpenter, was in bands when he was younger and played the viola and guitar. Joe said one of his older sisters dated the bass player in the band that Patrick played in when he was younger, and that he saw Patrick perform a number of times as well.

In November 2017, Stacey shared that she was diagnosed with Stage 1 triple-positive breast cancer and had undergone treatment for a year and a half. The family’s connection to Patrick was apparent to Charles. Charles noted that Patrick was extremely specific on how to do the scholarship, and he expressed his worry about finding the perfect fit for the scholarship.

“The moment I met Alexander and his family, and all the local connections kept popping up, it was obvious Patrick had connected us,” Charles said. “From Alexander being our father’s and my middle name, to his mom and dad growing up in Danville, Virginia, attending the same high school, having similar friends and his sister dating the bass player in Pat’s band. His father commented that he’d even been over to hear Pat’s band play at our house several times. Alexander is an amazing young man, and I know 100% my brother Patrick is giving us a big ol’ grin and shaking his head in approval from above.”

“I am excited to get a new cello also because we went to try some cellos out at Moore Music, and they sounded really good,” Alexander said. “I am going to keep on playing for as long as I can, and maybe make a living out of it.”

Alexander said he had been the first-chair all three years in his school’s orchestra. During his first time attending the All-County concert, he actually got to play fourth-chair, making him the only cellist from Kernodle that made it to All-County. Alexander has also played with the University of North Carolina at Greensboro’s summer camp orchestra this past summer.

“This [scholarship] will also enable him to go to more camps and hone his craft,” Stacey said. “We are so appreciative. So far, he just got a hard case, and he is waiting for the new cello to come so that he can try it out.”

To help other aspiring musicians like Alexander, make a donation to the scholarship fund through GoFundMe.

(Note: Donations are not tax-deductible.)