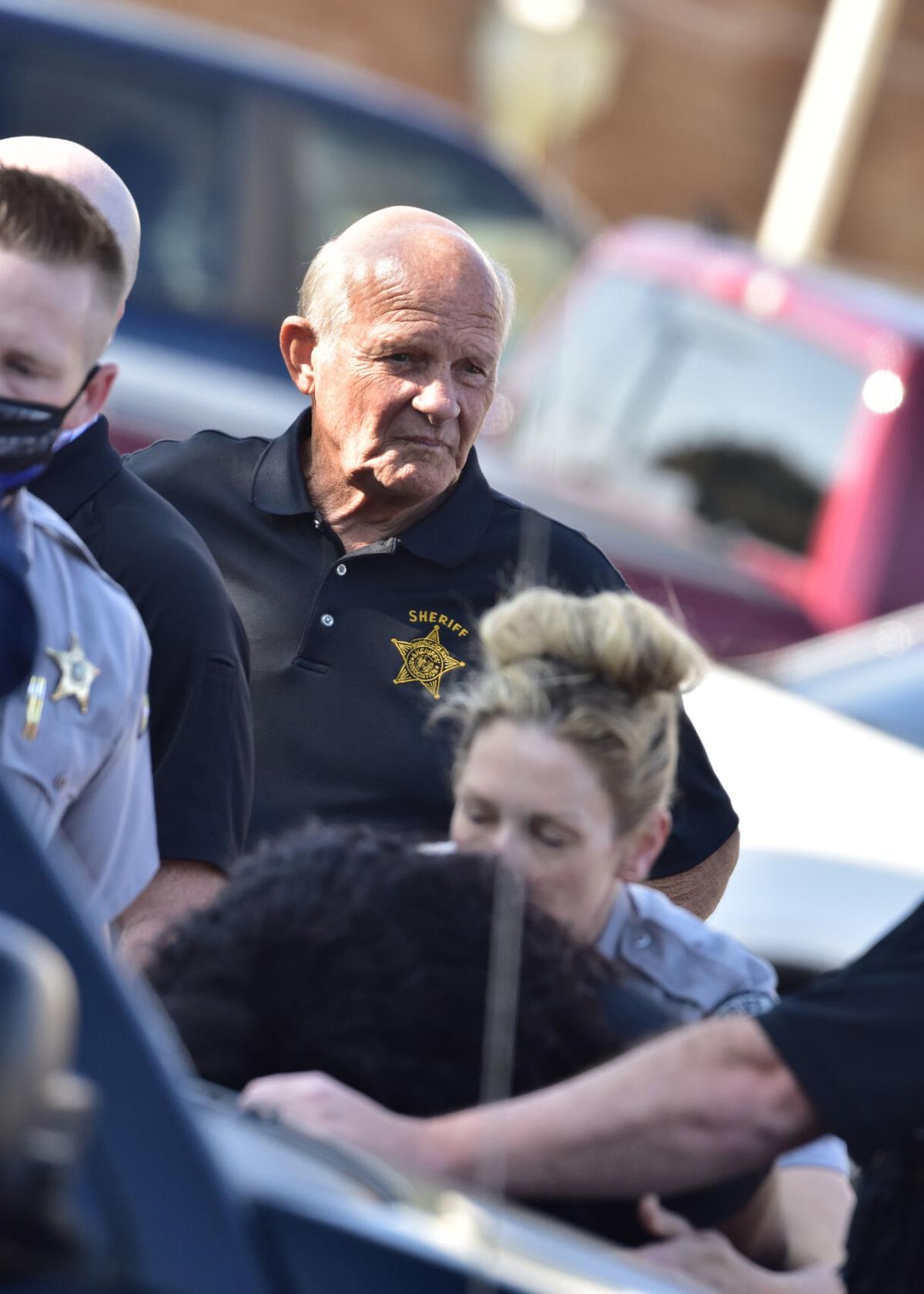 The maskless sheriff supervises the arrests of activists while protesting 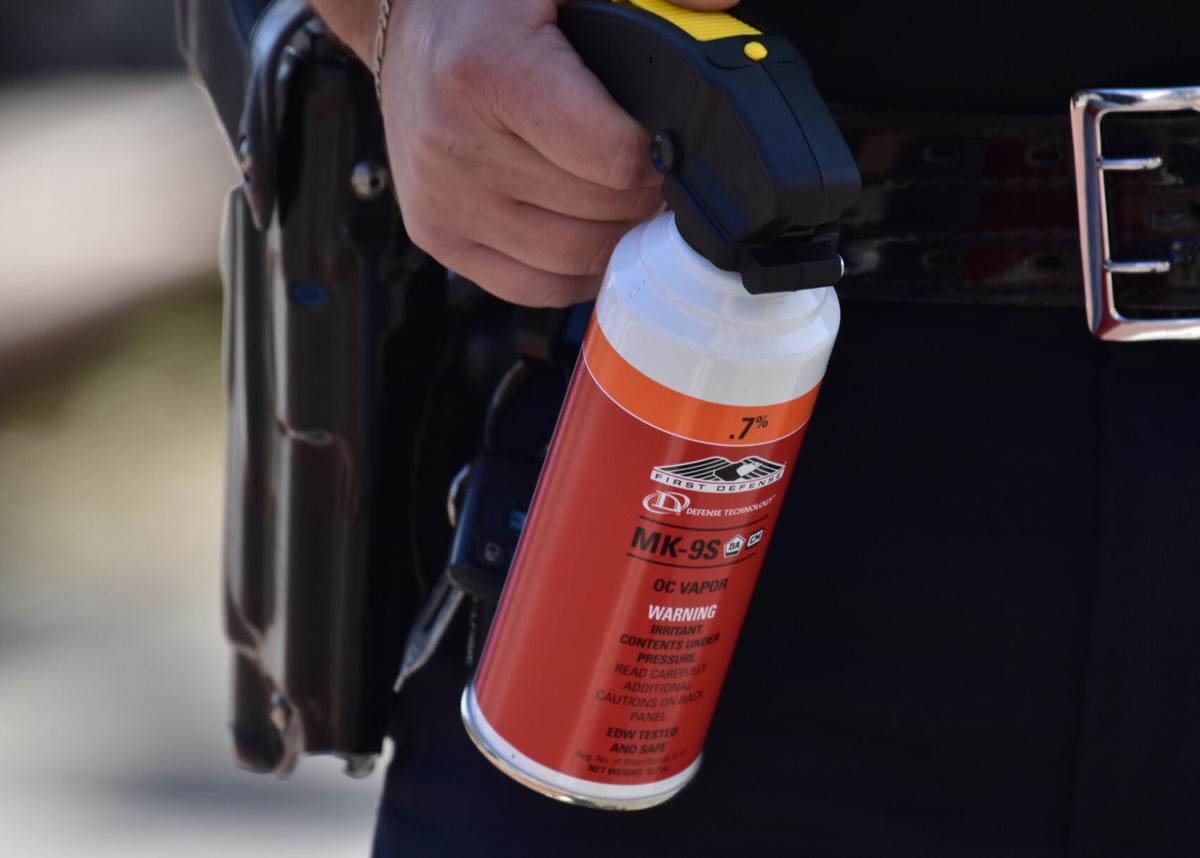 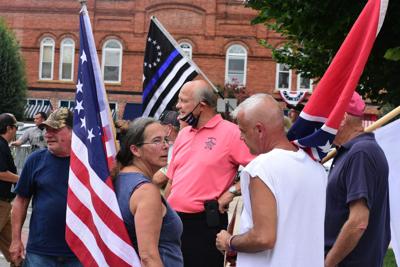 The maskless sheriff supervises the arrests of activists while protesting

After filing felony charges against Greensboro minister Greg Drumwright, the Alamance County Sheriff’s Department shared what activists say is a deceptively-edited audio clip of Drumwright’s plans for a protest in Graham this Sunday.

As previously reported, on Oct. 31, Alamance deputies and Graham police officers attacked the “I Am Change March to the Polls” rally led by Drumwright, Burlington Mayor Ian Baltutis, and George Floyd’s niece and nephew Brooke and Brandon Williams. When sheriff’s deputies charged from the historic courthouse building and arrested speakers addressing the crowd, Drumwright was pepper-sprayed in the face, thrown to the ground and handcuffed.

Others directly pepper-sprayed included Janet Johnson, a 56-year-old Black minister from Graham who attended the march in a motorized wheelchair, and the bystanders who came to her aid while she convulsed. Documentary filmmaker Nat Frum was pepper-sprayed multiple times, first when helping to carry Johnson to a medical station, then while attempting to retrieve her wheelchair.

On Nov. 18, over two weeks after the event that earned Sheriff Johnson international condemnation, Johnson’s office responded, not with an explanation or apology, but by announcing felony charges were being brought against the Black Greensboro clergyman they pepper-sprayed and arrested.

Rev. Greg Drumwright was charged with felony assault on an officer and obstructing justice. According to the Washington Post, “the Alamance County Sheriff’s Office said it has reviewed video of the Oct. 31 rally and alleged that Drumwright, pastor of the Citadel Church in nearby Greensboro, was involved in an ‘altercation’ that left a deputy injured.”

(This writer, who witnessed the deputies’ assault on the speakers’ stand, and has reviewed multiple videos of the incident, has seen no evidence of either an altercation or an injured deputy.)

As the Post article notes, the felony charges were filed after Drumwright, the ACLU of North Carolina and the Lawyers’ Committee for Civil Rights Under Law filed a federal lawsuit against Sheriff Johnson and Graham Police Chief Kristy Cole for the tear-gas attack on the voting rights march.

“These charges are retaliatory in our view,” attorney Elizabeth Haddix told the Post. “We’re looking forward to seeing the video the sheriff referenced. The videos we have seen dispute his statement.”

On Nov. 20, Sheriff Johnson launched a social media counter-attack via a post on his office’s Facebook page, which stated:

According to an anonymous recording received by the Alamance County Sheriff’s Office, a demonstration is expected to be held in downtown Graham on Saturday, November 28, 2020.

[As noted below, this date was subsequently changed to Sunday, Nov. 29]

At one point, Mr. Drumwright states, “I’m here to announce that, yes, we will march again and while we may not all agree on a march, what we need to understand is that, it’s either at this point, a march or a riot. We work with others, we’re at war.”

The Sheriff’s Office strongly encourages all those that attend the November 28 demonstration to refrain from harming people and property, blocking streets and intersections, and trespassing, as these actions are illegal and can result in arrest. While the Sheriff’s Office supports and respects an individual’s constitutional right to free speech, we continue to ask everyone to exercise those rights in a peaceful and respectful manner.

This social media post mischaracterizes what Drumwright actually said at that meeting, according to the full audio recording of Drumwright’s speech obtained by YES! Weekly. Elon University professor Tony Crider, whose photographs have documented the activities of white supremacists, anti-racist activists and law enforcement’s reaction to both across the North Carolina Piedmont, told YES! Weekly that Drumwright was “clearly proposing the organized march as a means to channel the energy and avoid an unorganized riot.”

The full text of Drumwright’s speech is too long to reproduce in print, but the relevant portion has been reproduced below:

I’m here to announce that, yes, we will march again. And while we may not all agree on a march, what we need to understand is that, it’s either at this point, a march or a riot. We work with that understanding. We’re at war. I’m going to be honest with you. It does not feel good to be sitting in this room, one week before Thanksgiving, after an entire summer of activism.

Drumwright also sated that he was not the only activist targeted by Alamance and Graham law enforcement.

They have been trumping up charges to engage innocent people in the criminal justice system, whose lives will never be the same if convicted. I want you to understand that I have received messages that the sheriff is going after more than just me. And in the group that he’s seeking to throw felony charges on is a really rock star rising teacher in Guilford County. And for those of you who are educators, a teacher who is facing felony charges could actually lose their career. This individual is certified and performs so well through the certification process that now they teach and help to certify other teachers in the Guilford County School System.

Drumwright made it clear that he was not advocating a riot by stating:

In a comment on the post from the Alamance Sheriff’s Office, activist Carey Kirk Griffin denounced Sheriff Johnson for his refusal to the denounce the violent rhetoric of white supremacists.

“You NEVER DENOUNCE the violent propaganda and ‘call to arms’ that Gary Williamson or other ACTBAC members enlist before events,” Griffin wrote, “because you’re all in bed together.”

Gary Williamson, founder of Alamance County Taking Back Alamance County, which the Southern Poverty Law Center once listed as hate group in 2017, is one of many neo-Confederate counter-protesters whom Johnson has been publicly friendly toward during rallies, at which he has personally arrested anti-racist demonstrators for cursing, while merely observing and even laughing as the neo-Confederate supporters made threats and shouted racist insults. When ACTBAC member Steve Marley posted a literal call to arms on the ReOpen NC Facebook page against the 700 Black Lives Matter demonstrators who peacefully marched from Burlington to Graham in July, the Alamance County Sheriff’s Office had no public response.

On Tuesday afternoon, Drumwright told YES! Weekly that the date of the “Ready 4 Change Peaceful Protest for Criminal Justice Reform” has been changed from Saturday to Sunday, Nov. 29, with demonstrators assembling at 1 p.m. in the Children’s Chapel United Church of Christ at 334 E. Harden St. in Graham, and the march beginning at 2 p.m. He also said that he met with representatives of the Greensboro Sheriff’s Department on Friday, Nov. 20, so that felony papers on him could be served. He did not state why he met with Guilford rather than Alamance deputies.

In his closing remarks, he acknowledged the health risks of the ongoing pandemic.

“COVID is real. I’m not trying to downplay it. I’ve provided pastoral care to many people this summer who have dealt with COVID. Thanks be to God, none of them have died. But we’ll do it and we’ll do it safe. Bring two masks if you have to. It may be cold. Get your coats. Ask your auntie if you can borrow her fur. You need to look fabulous in the streets that day, but we’re going to keep going.”