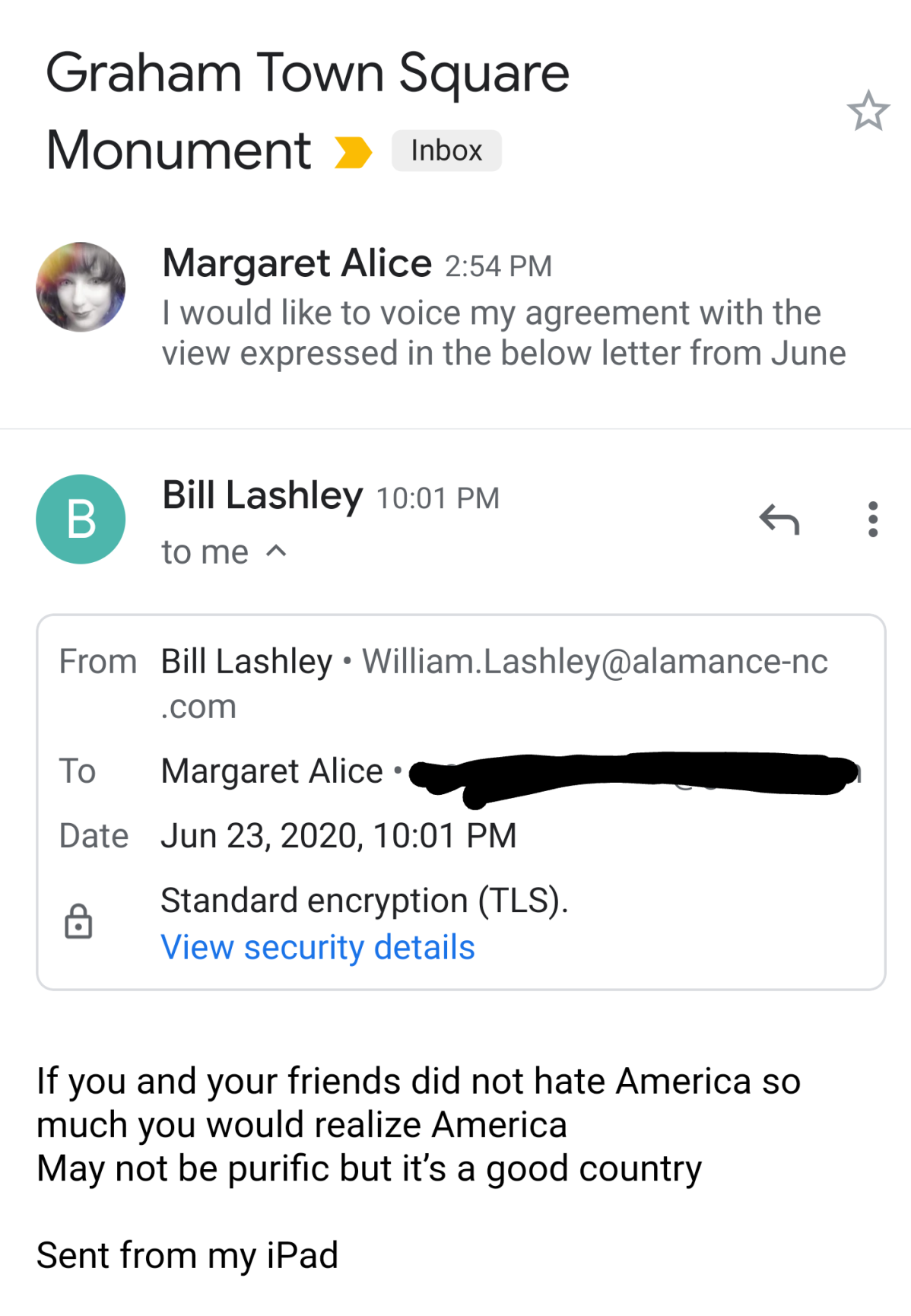 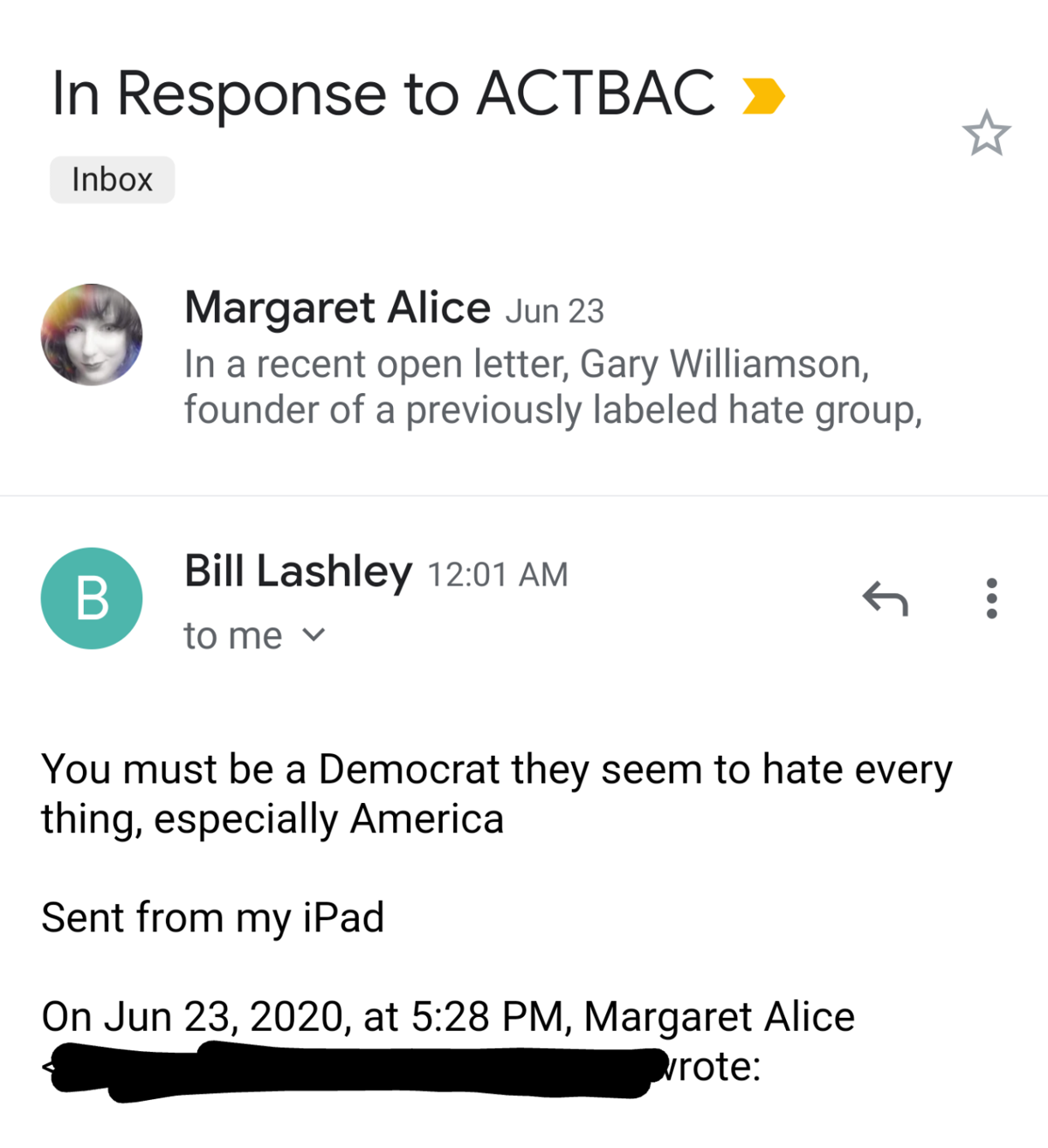 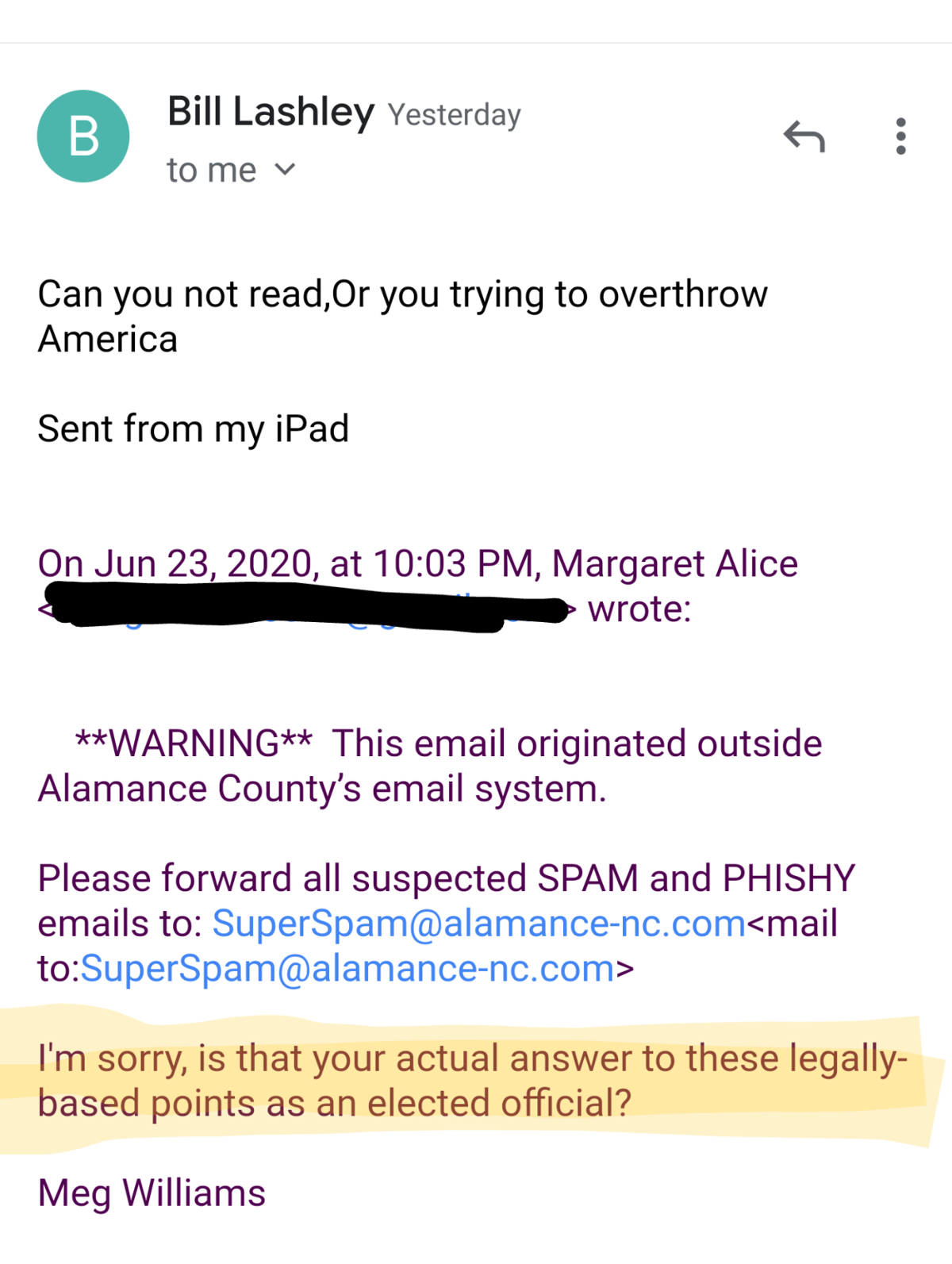 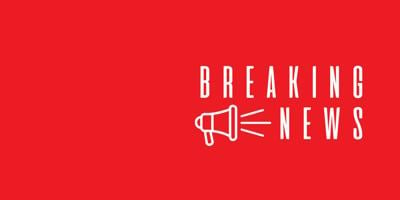 In neighboring Alamance County, the City of Graham recently received backlash over its controversial handling of protesters and the Confederate statue located in front of the county’s courthouse.

Last week, The American Civil Liberties Union of North Carolina and other entities filed a lawsuit challenging the City of Graham’s ordinance that required protesters to seek a permit 24 hours before a demonstration from the police chief, claiming that it infringed upon protesters’ First and Fourteenth Amendment rights. On July 6, a Federal judge blocked the ordinance and placed a temporary restraining order against officials from the City of Graham and Alamance County.

On July 11, protected by that order, hundreds showed up for the "March For Justice" in favor of removing the controversial statue from the public square. One Alamance County resident has been pushing for the removal of the statue since the end of June, but she claims her experience with local government officials has been one with “little to no response or action.”

“They give off the distinct impression that everything is fine the way it is,” wrote Meg Williams, a Greensboro native who has lived in Alamance County since 2013, in an email. “However disappointing it is to feel like an individual not being listened to, though, has been nothing compared to right now.”

Williams alleged that on June 20, there was “an unpermitted protest by neo-Confederates in the town square of Graham to maintain the Confederate monument located in front of the historic courthouse.”

“Many members of this protest were openly armed, many were wearing shirts representing ACTBAC, a previously labeled hate group, and many hurled insults and hate speech at local business owners to the point they felt unsafe,” Williams wrote. “At least three were filmed committing assault, and two were arrested. My husband and I were present to stand with our neighbors from about 6:15-7:30 p.m.”

ACTBAC or  Alamance County Taking Back Alamance County was listed as a Hate Group by the Southern Poverty Law Center in 2016 and 2017. According to the Times-News, ACTBAC was recently taken off the SPLC’s Hate Map last year for not making statements ”denigrating others based on immutable characteristics.”

As a result of the alleged unpermitted protest, Williams said, Graham’s city manager issued a recommendation to county commissioners for the monument’s immediate removal, citing it as a matter of public safety.

“Our commissioners blatantly dismissed his warning without addressing the concern, and continued to give inappropriate responses to constituents,” Willams wrote. “They ignore our calls, hang up on us, and when we do get them to answer, they send emails like the ones in the attached screenshots.”

Williams wrote that she had been emailing the commissioners daily with the question:

What are you going to do about the monument?

“The first of the two emails Commissioner [William “Bill”] Lashley chose to respond to was a simple introduction voicing my support for a recent open letter written to the state government by a group of N.C. legal minds arguing that there is an obligation to our state and federal constitutions that overrides our monument protection law, and therefore, the law should be repealed and all Confederate monuments should be taken down, followed by the text of that open letter.”

When she finally got a response, she said she was shocked at what her elected official sent to her. Williams shared screenshots of her email correspondence with Alamance County Commissioner Lashley with YES! Weekly.

His response to her first email was:

If you and your friend did not hate America so much you would realize America May not be purific [sic] but it’s a good country.

Williams wrote to YES! Weekly that she didn’t personally know any of the authors of the open letter, so she was confused by Lashley’s response. After replying to Lashley with: I’m sorry, is that your actual answer to these legally-based points as an elected official?

Williams said she received the following response from the commissioner:

Can you not read,Or you trying to overthrow America

“The second was an email regarding the County Manager’s recommendation to the commissioners to remove the monument due to the public safety hazard it poses,” Williams wrote. “Members of the previously labeled hate group ACTBAC have publicly stated their willingness to go to war to defend the statue from even legal removal and have threatened and assaulted peaceful protestors, including referring to us a ‘target practice’ and using racial slurs against Black business owners and residents in the square. It’s an obviously tense and unsafe situation, but their continued stance is that it’s ‘fine where it is.’”

You must be a Democrat, they seem to hate every thing, especially America.

“For context, I have been unaffiliated since I first registered to vote at 18,” she noted. “My concerns are that they are blatantly ignoring us, hanging up on us when we call—like Bill Lashley did to me and Amy Galey did to a friend of mine for starters. And then I get these email responses from Commissioner Lashley displaying an utter lack of professionalism and fitness to serve.”

“To make things worse, I forwarded the responses to Chairwoman Amy Scott Galey, asking her to publicly condemn such behavior and demand better from her fellow commissioners, and once again, received radio silence.”

YES! Weekly emailed Commissioners Lashley and Galey on July 6 asking: Is this how Alamance County Commissioners respond to taxpayer’s questions/concerns?

“As is often the case, I do not agree with Mr. Lashley’s thoughts or his manner of expressing them.”

Lashley, however, did not respond as of July 14.

Williams wrote that she believes her county commissioners have shown that they are not prepared to address racism in their community. Judging from her email correspondence with Commissioner Lashley, she doesn’t believe the commissioners serve all the people of Alamance County.

“In short, I expect them to step up and do better in the face of the overwhelming amount of residents telling them it’s time,” Williams wrote when asked what she expects from her elected officials. “In general, I expect to have representatives who can speak and write intelligently, for one. I expect my representatives to acknowledge contact from their constituents, and to conduct themselves professionally and respectfully. I expect this set of commissioners, in particular, to publicly denounce these responses from Bill Lashley, and honestly, after his comment last month about how they used to ‘beat them to death’ when he was a cop, call for his resignation—immediately. He’s clearly not fit to serve.”

Williams said she is also concerned over the amount of taxpayer money that is being spent to keep law enforcement “from the Sheriff’s department, Graham, Elon University, and others surrounding this monument for protection.”

Williams wrote that she hopes to see the commissioners act by opening up a dialogue with the community.

According to the Times-News, 50 of “Alamance County’s local government, business, education and healthcare leaders” called for the statue’s removal on June 29. In response, Galey claimed that the commissioners could not legally remove the statue. Since then, the commissioners have not made any public statements (that this author can find) on the matter.

As of July 14, Williams said she still has not received a response. She has plans to attend the commissioners meeting next Monday.