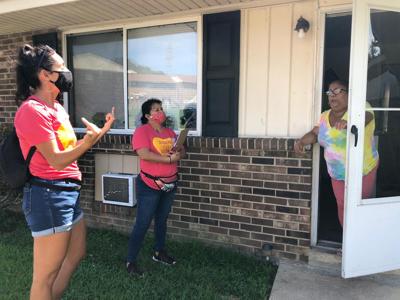 GREENSBORO, N.C. —  Tomorrow, Saturday, dozens of Latino volunteers will knock on hundreds of Latino voters' doors in Guilford County's House District 59. The volunteers include residents of Forsyth, Randolph, Rockingham, Alamance, Mecklenburg and other counties, and include a 71-year-old, several 17-year-olds, DACA recipients who cannot vote, mothers of young children, and women whose husbands have been detained by ICE.

The voter mobilization effort comes the same week a whistleblower revealed forced sterilizations at the ICE detention center that houses most of the North Carolina women detained by ICE. Many of the volunteers knocking doors tomorrow have had family members or have themselves been detained by ICE.

"The news from Georgia is sickening. This is the direct result of the Trump Administration's war on immigrants, which has been enabled at the state level by people like Jon Hardister, who last year voted in favor of the 'Show Me Your Papers' bill HB 370," said Laura Garduño Garcia, a Greensboro DACA recipient and mother of two.

The effort is part of Mijente’s Fuera Trump campaign, aimed at organizing and mobilizing Latinxs voters ahead of the November election. It will kick off with a training and orientation at Greensboro's Barber Park from 10-11 a.m., and lunch will be served for volunteers in the same location between 1:30 and 2:30 p.m.

Over the next two months, Mijente will reach out to tens of thousands of Latinx voters across eight North Carolina counties, most of whom sat out the 2016 election. In just the last week, Mijente volunteers knocked on over 2,000 voters' doors in Alamance, Forsyth, Durham and Wake counties.

“We have just over two months to get Trump out of the White House and to take back our own State House. North Carolina has one of the fastest growing Latinx populations in the country, but our people receive little attention from the national parties, and we are hungry for change. Mijente has been building a diverse and inclusive organizing program in North Carolina since last year because we know that if we engage our communities, Latinxs could swing this state against Trump, and flip the local power dynamic in our state government. That’s why we’re proud to endorse Nicole Quick, who we know will fight for our values and for our families.” said Arianna Genis, NC State Director for Mijente.

Since July, North Carolina Mijente members have sent over 80,000 text messages and made hundreds of phone calls to engage Latinxs voters.