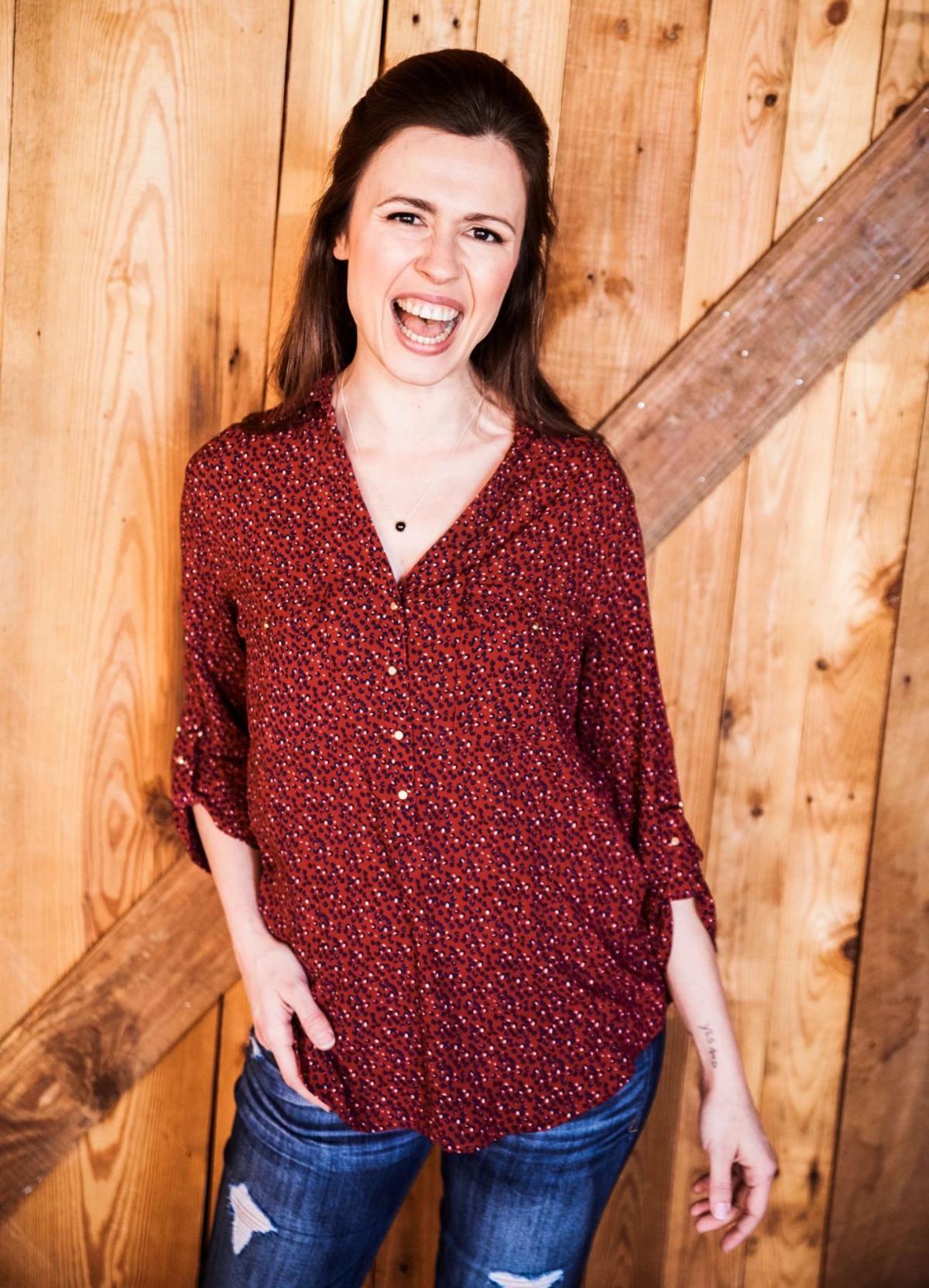 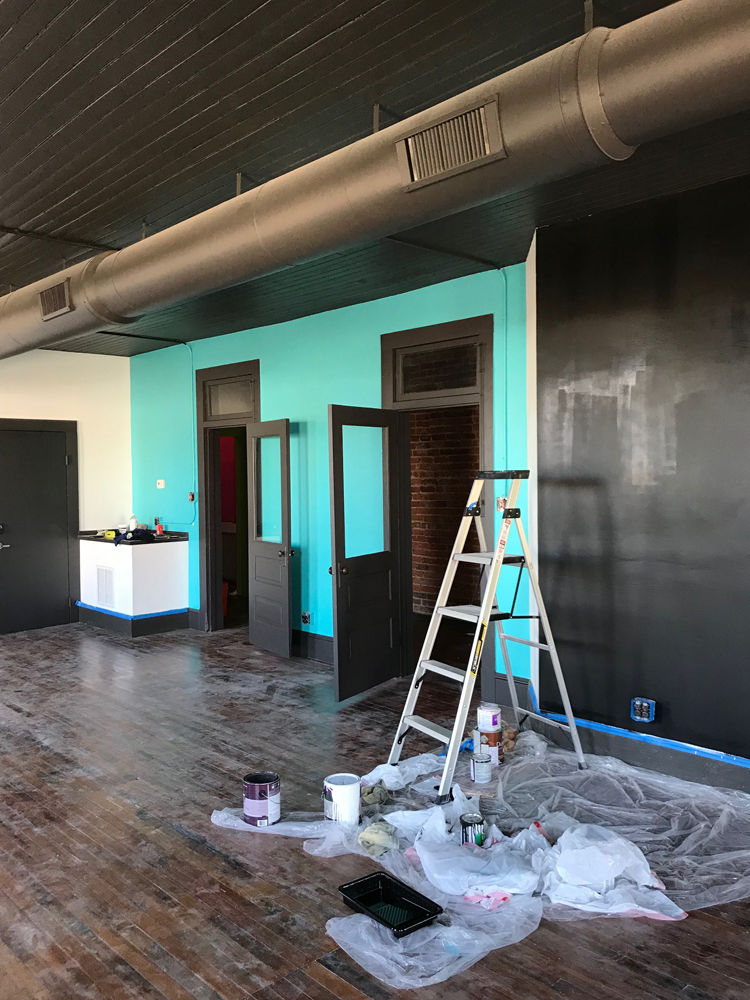 The interior of Fearless after the walls were painted 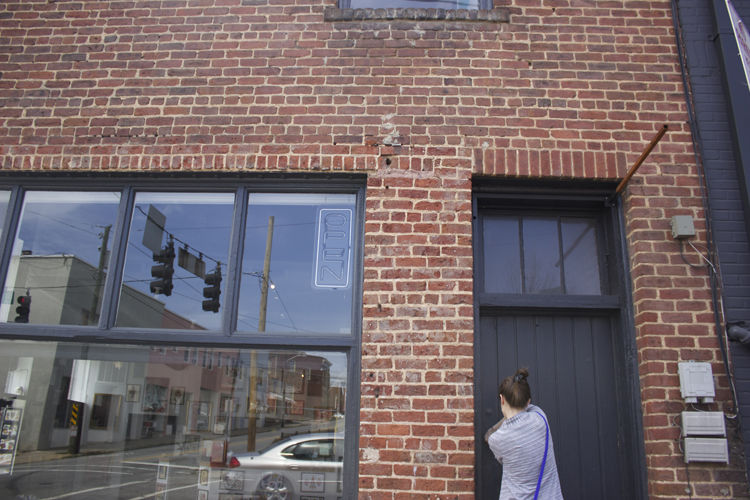 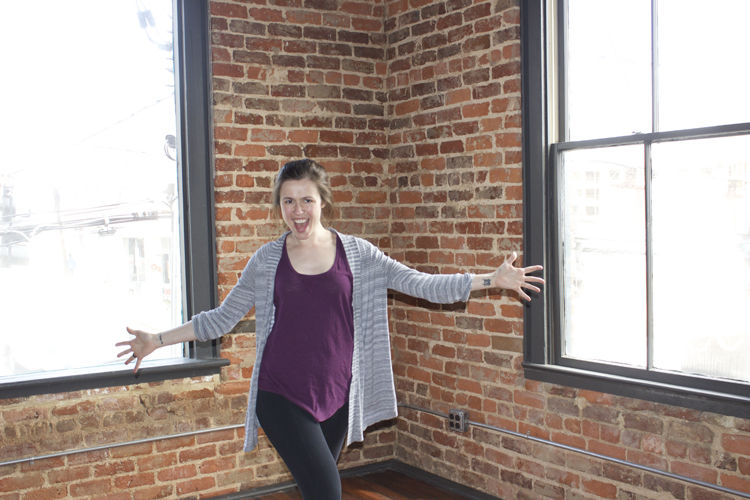 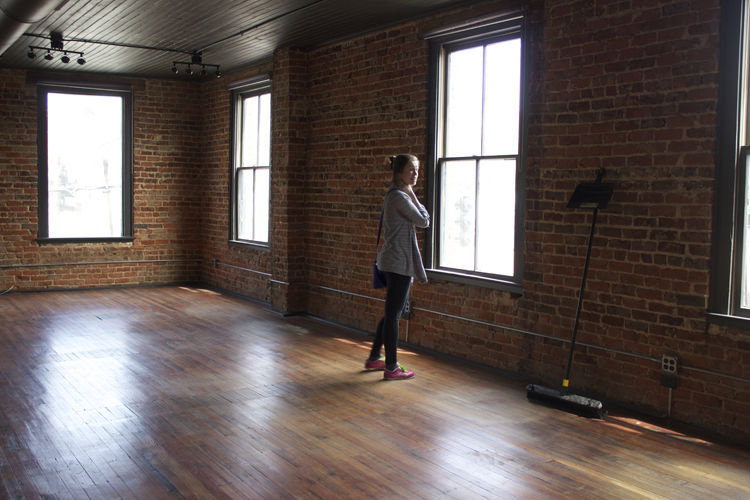 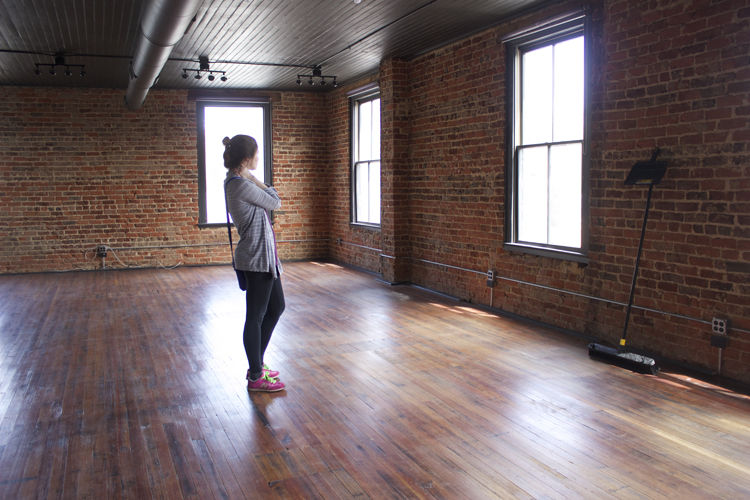 Jen Oleniczak Brown in the Fearless space located at 1002 Brookstown Ave. in Winston-Salem 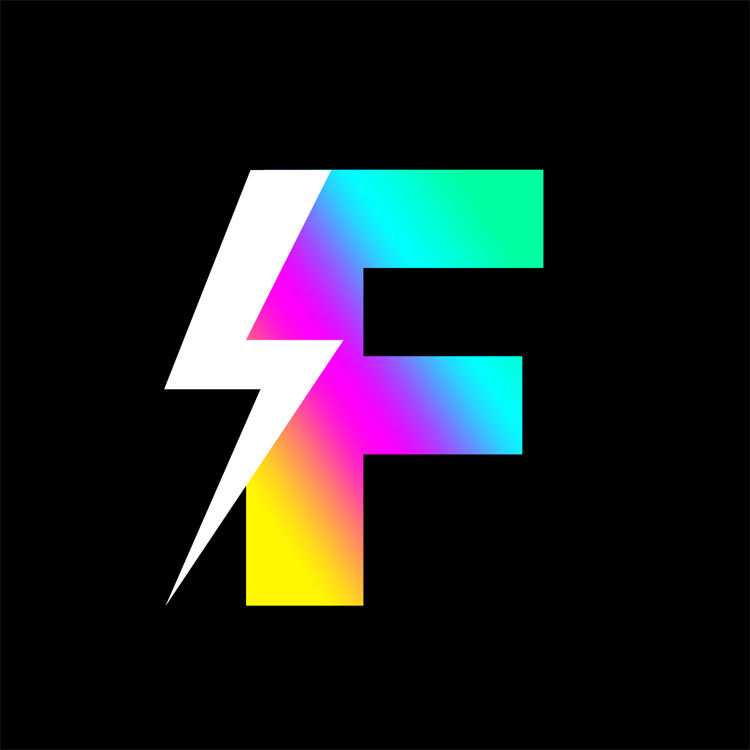 The interior of Fearless after the walls were painted

Jen Oleniczak Brown in the Fearless space located at 1002 Brookstown Ave. in Winston-Salem

“Shine Theory is the simple premise that ‘I don’t shine if you don’t shine.’ It’s a term I coined with Aminatou Sow to describe a commitment to collaborating with rather than competing against other people—especially other women,” wrote freelance journalist Ann Friedman on her website (www.annfriedman.com/shine-theory/). This premise has inspired one Winston-Salem woman to pass along the shine in an ambitious endeavor to bring local women together for community and collaboration.

Jen Oleniczak Brown, 35, is the founder and director of the company The Engaging Educator. Oleniczak Brown said the 5 ½-year-old company started out as her “side hustle” when she lived in New York City performing Off-Broadway with her improv troupe. Now, she said EE has grown to serve over 30,000 students. Oleniczak Brown said EE seeks to empower women with their public speaking, communication skills, and social skills through an improv-based education.

Oleniczak Brown brought EE to Winston-Salem when she moved here two and a half years ago. She also works as a member of women in tech initiatives, as a mentor at the Forsyth Technical Community College’s Small Business Center within the Launch Program and as a coach for progressive women running for office. However, she wanted to find more ways she could help serve local women in the area. When she saw a “for lease” sign in a window on the corner of Burke Street and Brookstown Avenue (above the tattoo parlor and beside Camel City Goods), she knew it would be the future site of Fearless (1002 Brookstown Ave.), a collaborative space for women.

“I realized there was no space that women could just go and be comfortable in,” she said. “With this space, it all kind of fell into place pretty neatly. I want to have a space for women to share their skills and crowdsource classes, empower one another and up their confidence by learning skills, so in that sense, it is everything from coding, gardening, to how to do your eyebrows. Everyone is welcome in a space no matter if you value how your eyebrows are done or if you value construction tools. It is a little bit of everything.”

The name of the space is called Fearless because Oleniczak Brown wants the name to reflect a place where women are not afraid to try things, or go and be themselves.

“The idea of Fearless, [is] I want that second guess to go away,” Oleniczak Brown said.

The space will host classes, programs, events, speakers and will build toward membership.

“With membership, what that looks like is probably going to end up being a conglomerate of usage of space,” she said. “I’m planning on keeping it as local, as Triad, as possible. I want it to be the elevation and empowering to local women.”

Oleniczak Brown also plans for there to be a craft space where women can work with their hands, a library “full of female authors” and a cafe with The Sweet Truth’s (Oleniczak Brown’s former mentee Faith McKnight’s business) baked goods available for purchase and a seating area. There will also be a projector and screen installed for presentations and movie nights.

“Where we get a caterer who comes in (who is woman-owned and operated), and we have food, (maybe cupcakes and wine) and we all watch a movie together,” she said. “Just to have a collective female experience, I think it is so necessary and needed right now. Especially with how the world feels.”

Dana Publicover is a partner at Fearless and a design thinking consultant who runs design sprints and conducts empathy studies. Publicover will also co-host a podcast with Oleniczak Brown called “Don’t Tap the Glass Ceiling,” (launching in three weeks) that “focuses on the unique issues and challenges of working while woman.” Publicover wrote in an email that women-centric spaces such as The Wing (New York City) and The Pink Ceiling (Raleigh) had contributed so much for women to work, learn and grow together.

“We are so used to fighting an uphill battle out in the world that sometimes we don’t know when to stop fighting, and we compete with each other,” she wrote. “But women, as a tribe, have an amazing capacity to support and elevate one another. We share these common experiences, and we fight the same fights, but we seem to have a little trouble joining together for a common cause. We hope that by bringing tons of talented women together, we can create an environment of support, collaboration and coexistence.”

Publicover wrote that she has met “many brilliant powerhouse women” in the area but they do not all know each other. She thinks Fearless is the ideal spot to get them all together.

“We’re not saying men aren’t allowed, but we’re also flipping a tired dynamic on its head by creating a space where women feel supported, comfortable and confident,” Publicover wrote. “If men were to come into the space and feel like the deck is stacked against them, maybe that moment could inspire a little empathy. We’re not trying to exclude anyone—but we are trying to elevate an underserved population.”

Publicover would like to see Fearless provide resources and information for women business owners to take charge of their own success. She hopes Fearless will foster a sense of belonging, confidence and “focused help without competition.” Publicover plans on teaching classes on empathy, design thinking, negotiating, sales, pitching, investor relations and business development.

“I am so excited to be a part of this space, and so honored to be able to share what I’ve learned as a woman in business over the last 10 years,” she wrote. “I hope I can help people grow even better and greater than I have ever been able, and I hope I can help them to avoid making the mistakes I had to make to learn what I learned.”

Bobbie Shrivastav is the co-founder of the digital transformation companies Docsmore and Benekiva. She will be teaching some classes on startups, commercialization of products, project management and hosting women in tech at the Fearless space.

Shrivastav wrote in an email that Fearless is an important asset for Winston-Salem because the city is growing in terms of startups and investments. She is excited to see a variety of activities and collaboration opportunities in the space.

“Studies have shown that though women overtime have ‘earned’ a seat at the table, it has been slow and in some studies, there is a decline of women executives or leaders,” she wrote. “There is a lot of work that needs to happen for funding disparity for women startups. Having this type of space is especially important in cities like ours to continue to foster and empower women. I’m part of many groups like Cupcakes, Coffee, Connection and partner with Venture Cafe and Flywheel for tech-related programming – we need more spaces like Fearless- a place where women are supported and heard.”

So far, Oleniczak Brown said over 30 local women have reached out and want to teach classes (myself included), over the span of this summer and beyond. Oleniczak Brown said the pre-opening event for Fearless is May 11 and is called Cupcakes & Creatives (a monthly meet-up for “creative female entrepreneurs”) from 6 p.m. to 7:30 p.m. It is hosted by One Crafty Miss and sponsored by Dewey’s Bakery and Fearless. Oleniczak Brown said on May 30 there will be an official opening party from 5 p.m. to 9 p.m. and classes start on June 4.

Some of the classes that are in the works include “How to Say No,” “Scoring Your Dream Job,” “Inbound Marketing Strategies,” “Yoga and Aerial Yoga,” “Coding,” “Interior Decorating,” “How to Buy a House,” “Personal Finance and Investments,” “Child Support and Custody,” “Improv and Public Speaking” (taught by Oleniczak Brown), “Reproductive Care,” “Sewing,” “How to be Politically Active,” and much more.

Oleniczak Brown said Fearless is a for-profit space where the cost of the classes (rentals, events and eventually membership) will generate the revenue for Fearless. She said she believes that everyone should get paid for teaching classes, and the cost of classes will be decided upon by the teachers. It will be split 60-40, where 60 percent of the total cost will go to the teachers and 40 percent will go toward Fearless. She said, of course, donations are always welcomed, “because if we build this together, everyone is going to feel ownership of it.”

On May 3, Oleniczak Brown is having a cleaning party to put the finishing touches on the space. Anyone who is curious can stop by, lend a hand or donate books by female authors.

If you are interested in being apart of Fearless, keep an eye out for the website (still in production), which will be housed under EE’s website (www.theengagingeducator.com/ ), the umbrella company of Fearless. Join the Facebook group by searching “Fearless Winston-Salem” for more updates. To contact Oleniczak Brown with any questions or to sign up for classes, email her at jen@theengagingeducator.com.