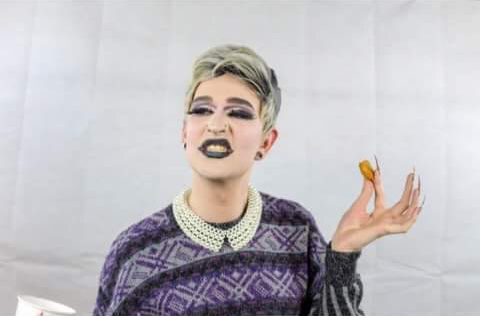 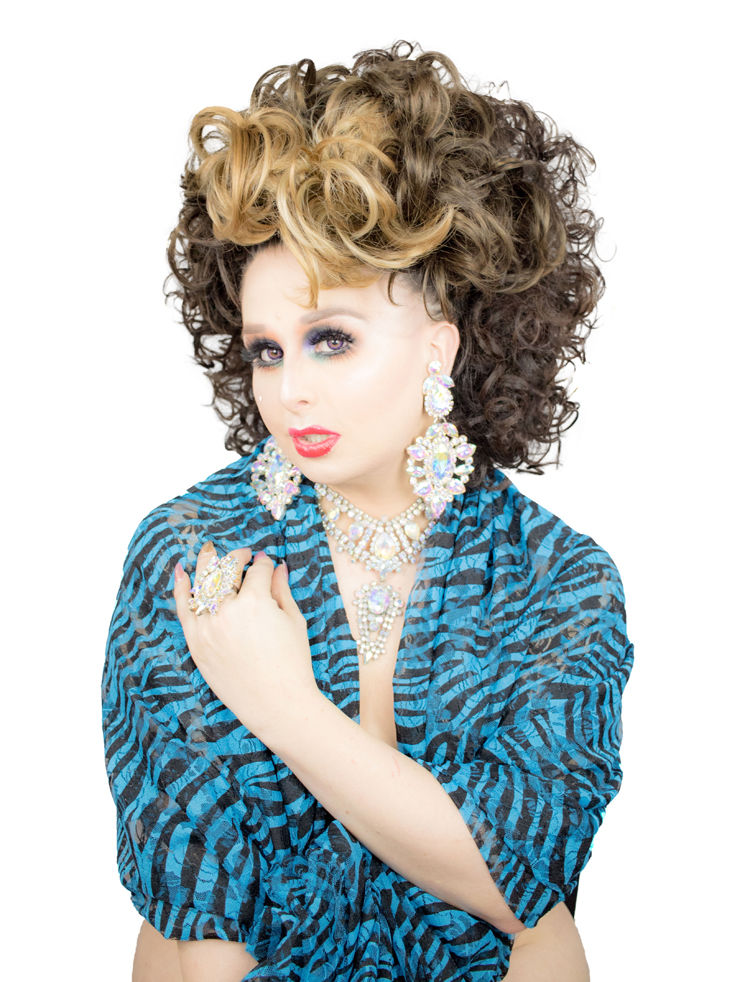 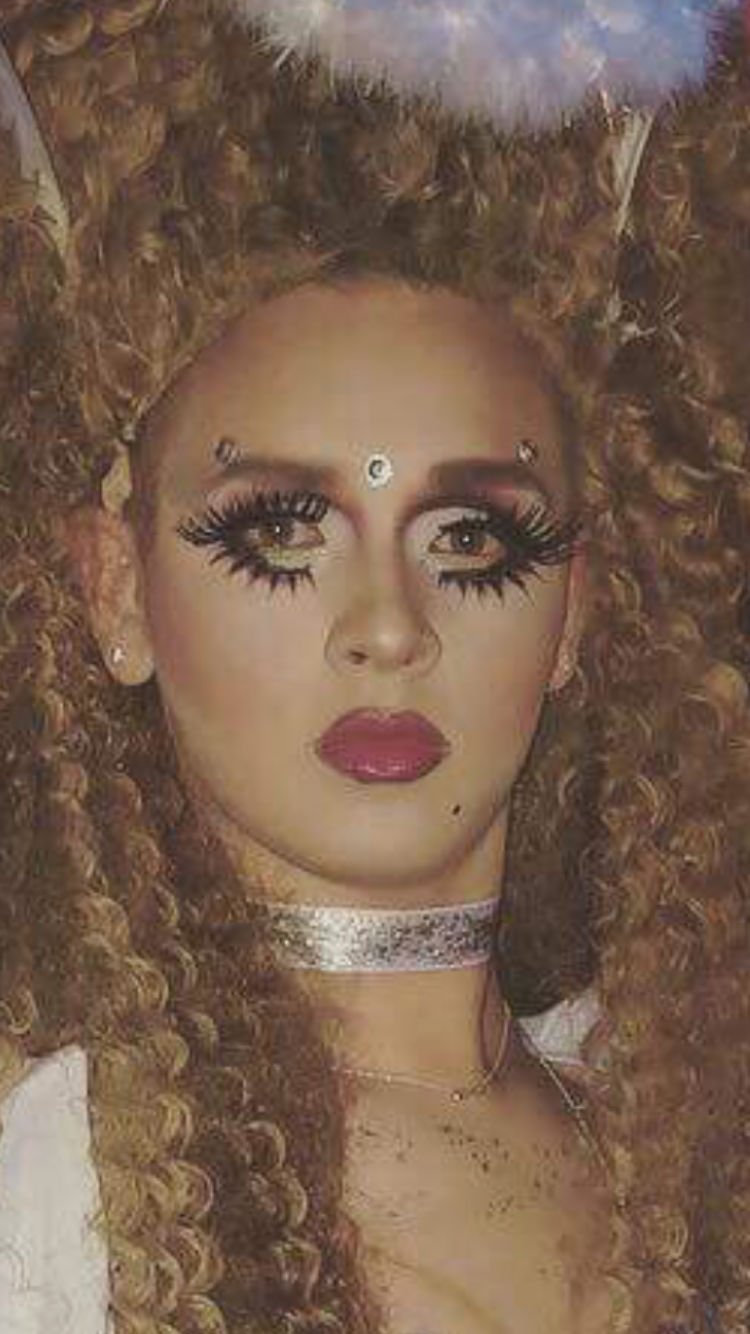 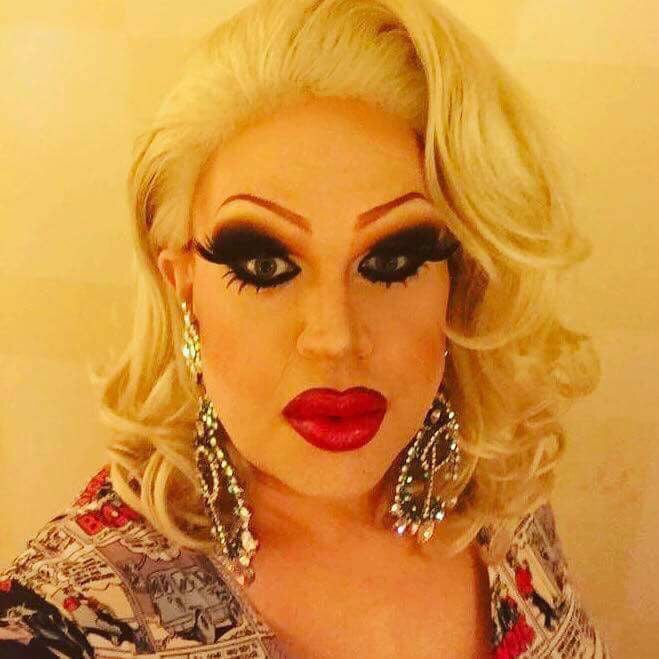 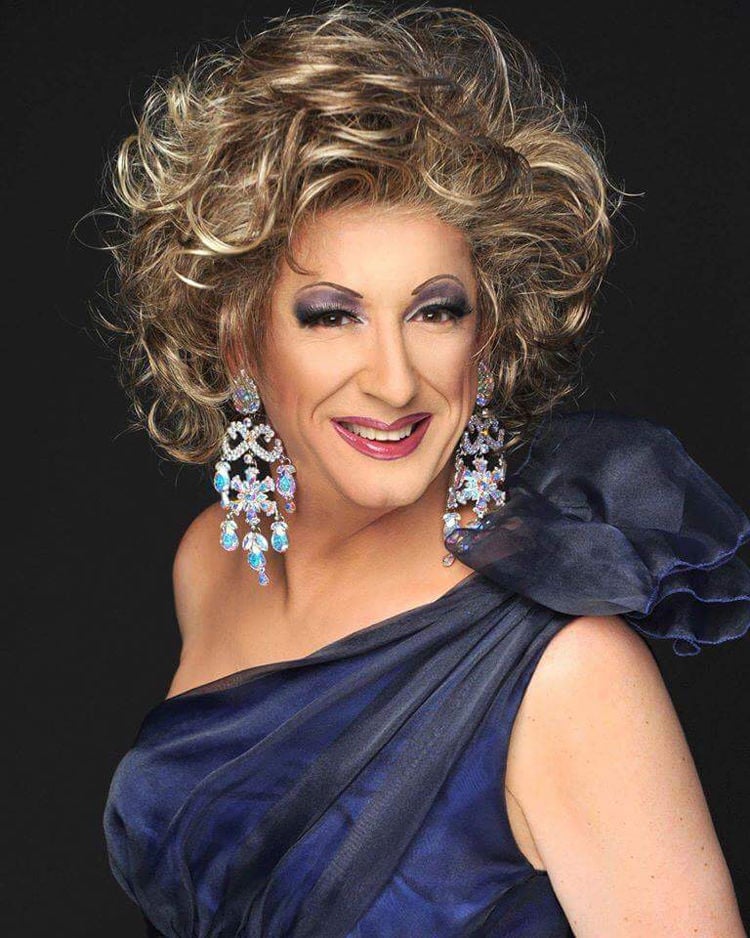 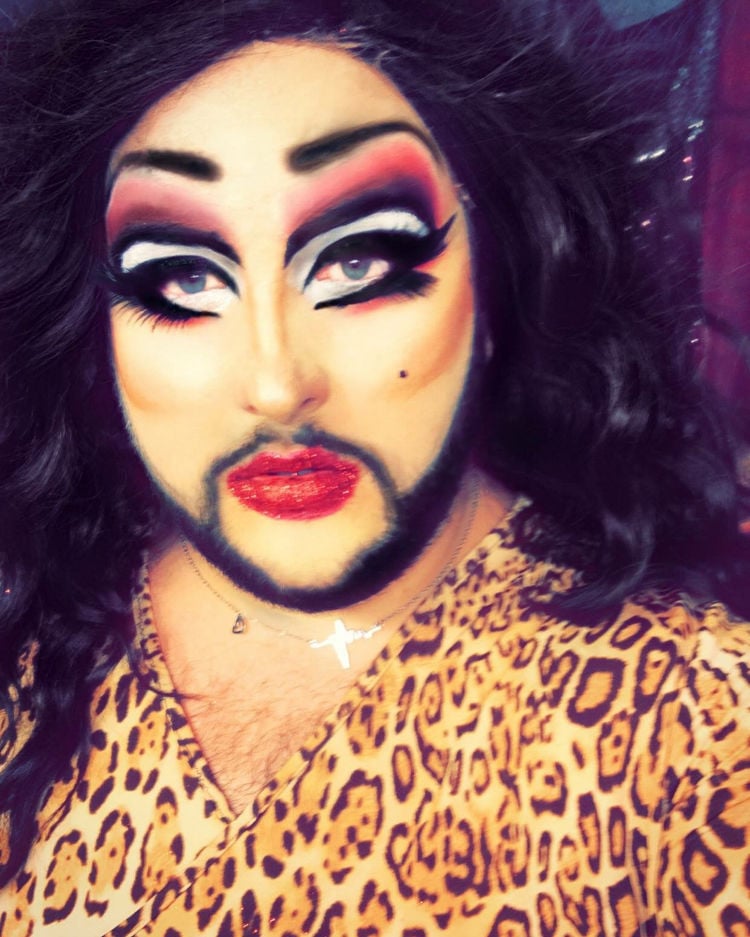 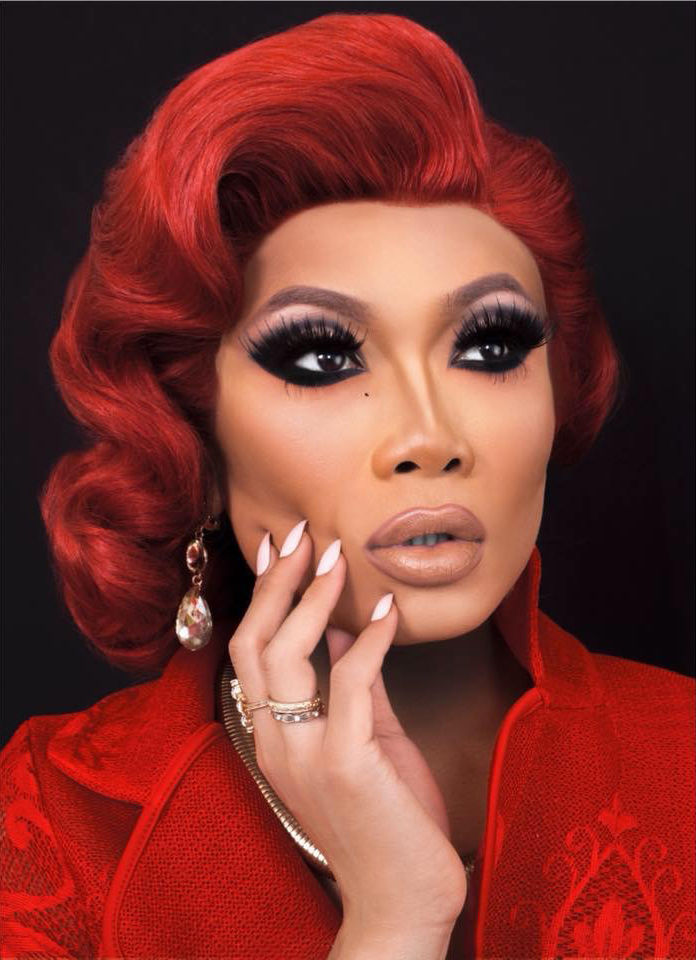 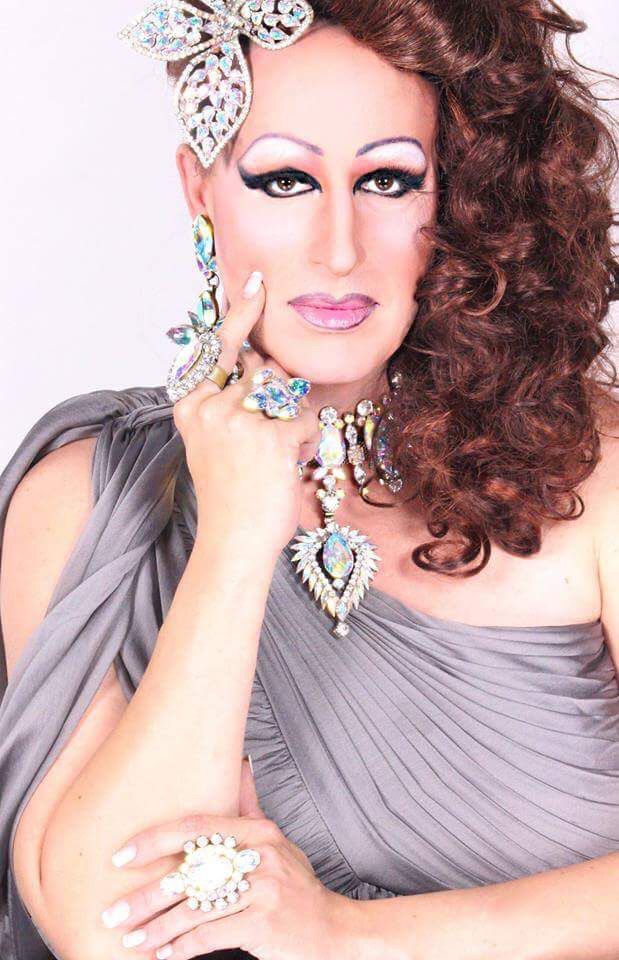 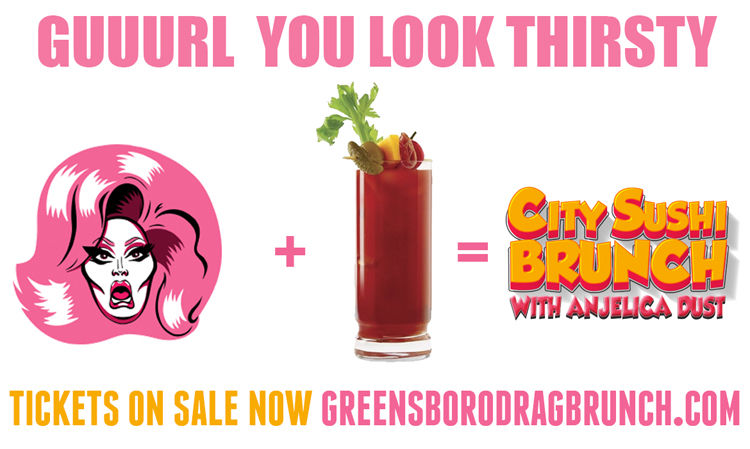 Mother’s Day is a day to appreciate your mom (or mom-figure) and what better way to do so than to take her out to brunch? In Greensboro on Mother’s Day, you can treat your mom like the queen she is by taking her to dine with other queens-drag queens that is. Greensboro’s newly installed City Sushi Brunch with Anjelica Dust is making its debut at Sushi Sapa (located at 223 S. Elm St.) for Mother’s Day festivities.

The brunch will be hosted monthly by well-known Greensboro queen Anjelica Dust and each month the proceeds from the event will go to a different local nonprofit.

“We really want to focus on our home,” Dust said in a phone interview. “We all love Greensboro everybody involved has been in Greensboro for so long, and we’ve seen the growth and the change downtown, and it is just a beautiful place. I love Greensboro. North Carolina gets such a bad wrap for so many things but, if you meet your neighbors, I promise they are a lot nicer, especially in Greensboro than you would ever imagine.”

For the first City Sushi Brunch, Dust said Greensboro Pride would receive the proceeds. Dust wrote in an email that she specializes in character illusions, comedy and “costumes fit for a queen.” With a “gift for gab” Dust reads books at “Drag Queen Storytime,” hosts at the “Beer and Fear Bash at Castle McCulloch” and does drag/hosts at Chemistry Nightclub (her home bar). Dust wrote that she has toured the United States from New York to New Orleans and worked in Los Angeles “with some of the biggest names in the business.” Dust wrote that she believes that charity and doing for others is one of the greatest gifts that this life has to offer.

“The Greensboro queens got together, and we decided that we wanted to start a charity brunch that we are going to be doing monthly,” Dust said. “All set up by the queens- queen at the front door, taking reservations, seating, hosting. We just wanted to set up something where drag starts all the way at the front door.”

Joining Dust for Mother’s Day is Jujubee (aka Airline Inthyrath and my personal favorite queen), who came in third place in RuPaul’s Drag Race’s second season. Dust wrote in an email that Jujubee is donating her time and will be performing for free “so that the charity can have all the money raised.”

Jujubee and Dust have worked three events together, and Dust said Jujubee would be performing at Chemistry Nightclub on May 12 for the “Sex Kitten Roundup” (starring Paisley Parque and Aria Russo), so it worked out perfectly to have her perform for the drag brunch on May 13.

“Jujubee is one of the most down-to-Earth, nicest, sweetest queens I have ever worked with,” Dust said. “I have had the opportunity to work up and down the East coast, I’ve worked in L.A., I have been doing this for 13 years, and I am still kicking. I got to meet a lot of drag race girls, and Jujubee is one of those girls that walk up to you, and it’s like you can’t help to be instant friends with her. She is so, so lovely.”

Other local, seasoned and new queens will also be performing and helping out at the brunch and for future brunches. On Mother’s Day, the other queens performing and volunteering include Tia Chanella (aka “The Fairy Drag Mother”); Fuscia Rage (aka “Miss Triad Pride 2012”); Kitty Litter (aka “self-proclamation First Lady of the City of Providence, Rhode Island”); KayKay Lavelle (aka the “Triad’s premiere bearded queen”); Brandi Stevenz; Crystal Frost (aka the “Glamour Granny of Greensboro,” “ Miss North Carolina Sex Kitten” and “Warehouse 29 Witch”); Pheremosa (aka “Mother Cockroach” and “Drag Foster Child of the Greensboro Drag Scene”); Paisley Parque ( aka “Miss Gay NC USofA At Large,” “Miss Dragula EOY FYI” and “the lips of NC”) and Xtassi.

Dust wrote in an email that Litter has raised “over $1 million for nonprofits over her 30 years of being a drag performer. Her motto is give till it hurts!”

Dust wrote that Rage is proud to be able to be apart of an organization “that brings understanding and encouragement to members of our beautiful community,” and is looking forward to the new Greensboro Drag Brunch.

“We have many more roads to go and challenges ahead,” Rage wrote. “We will continue to show the world our pride and respect for others. I encourage you to get involved in some way to push our cause forward; no good deed is too small. Reach out to anyone that may seem in need of a helping hand.”

Brandi Stevenz (whose “alter ego” is Brandon Hoover) works as a paramedic by day. Stevenz wrote to Dust in an email that she now performs her routines mostly for charity.

“My lip synching portrayal of my country music star heroine Reba McEntire routinely brings a cacophony of whistles from the crowd and thunderous applause,” Stevenz wrote. “If I can make one person smile and or help another have a better day then my job was successful. I live to help others any way I can.”

Dust said the menu for brunch includes Sushi Sapa’s regular lunch menu as well as some added brunch flavors such as an omelette with mushroom, tomato, onions, cheese, spinach, and a choice to add ham, salmon or crab for extra; and the Drag Star Breakfast that is composed of scrambled eggs, toast, pancakes and bacon. Other menu items include City Brunch (shrimp tempura, California roll and two nigiri); City Brunch 2 (spicy tuna roll, salmon and an avocado roll with two nigiri) and Misty’s Box (one half California roll, two nigiri, chicken hibachi and a soup or salad). There will also be specialty rolls called: “Anjelica’s Volcano,” “Fiery Olive Oyl,” “Tia’s Rainbow,” “Sex Kitten” and “Chemistrated.”

“The food may be good, but the drinks are going to be off the chain,” Dust said about the bottomless mimosas and bloody mary bar that are the specials for the brunch.

Dust admits that after 13 years of doing drag she still does not know everything. Her drag mother (Paisley Parque) helped set up this event, and Dust still looks to her for advice. Dust said Parque has been doing drag for over 25 years and is coming up close on 30 years.

“I have so much respect for people who have done drag longer than me and anyone coming up in drag,” she said. “There are so many different kinds of drag out there now, it is not just something that gay white men own anymore, and it never should be. Trans women can do drag; straight women can do drag, straight men can do drag-drag is a culture that is open to everyone. I love how social media has shown the last few years that everyone has the opportunity to have a couple minutes on stage and feel like a superstar.”

Dust said the television show RuPaul’s Drag Race has changed drag for the entire world. “Look at American Idol,” she said referring to Ada Vox, who was the first drag queen to make it to the Top 10, according to Billboard.com. “Drag is becoming much more mainstream. Straight people are getting to see how beautiful and how amazing the art form is. All of us here (Greensboro queens) we just want to share that with Greensboro, we want to raise money and help people in the process.”

To buy tickets for the inaugural City Sushi Brunch with Anjelica Dust, visit the website www.greensborodragbrunch.com. Tickets for the first show’s confirmed tables have sold out, but folks can still buy tickets for the same time bar seating and standing room for $15-$20, and the second show’s seating time is also still available for $15-$20. Doors open at 11 a.m. for the noon show and the second seating starts at 2 p.m. and the event is open to all ages. Dust said she can’t guarantee large parties sitting together, so people should arrive as early as possible.

“If not though, what a great new way to make new friends to watch a fabulous show and brunch with,” Dust wrote in an email.

The next dates for City Sushi Brunch with Anjelica Dust are June 10, July 8 and Aug. 12 and will be the second Sunday of each month with rotating entertainers.