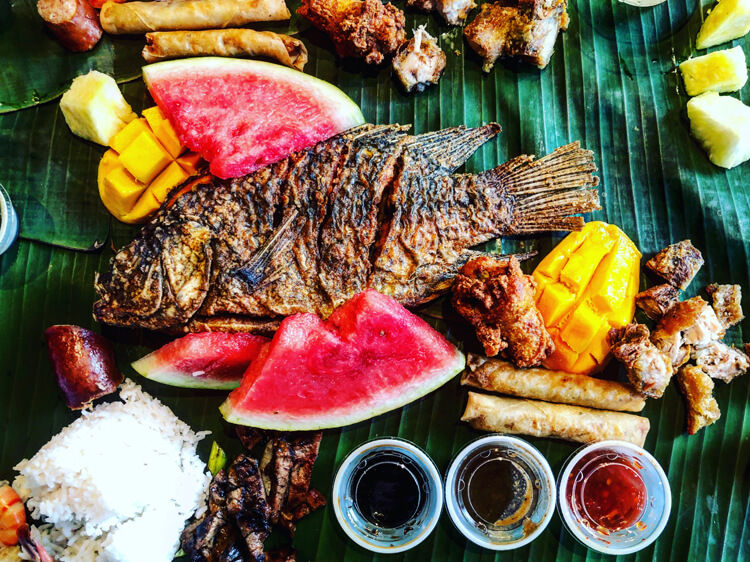 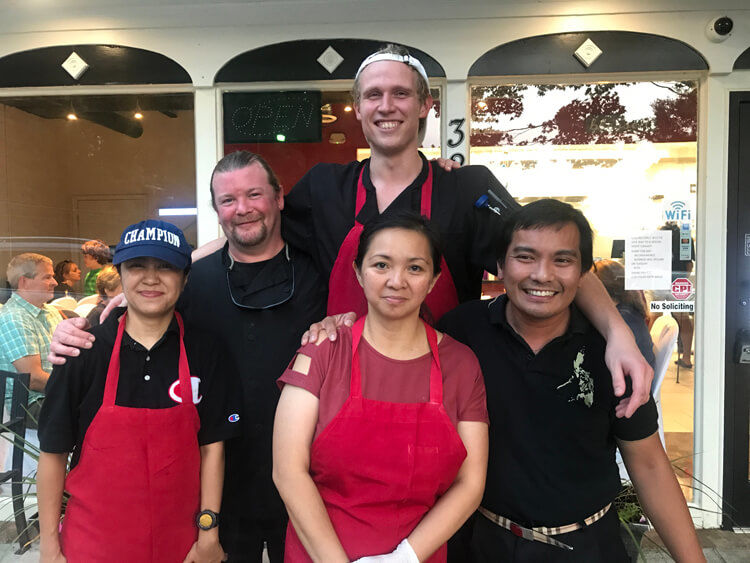 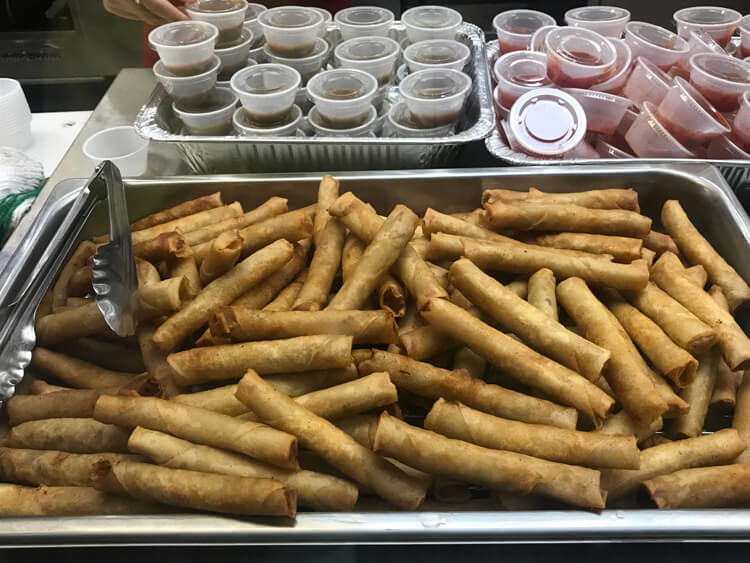 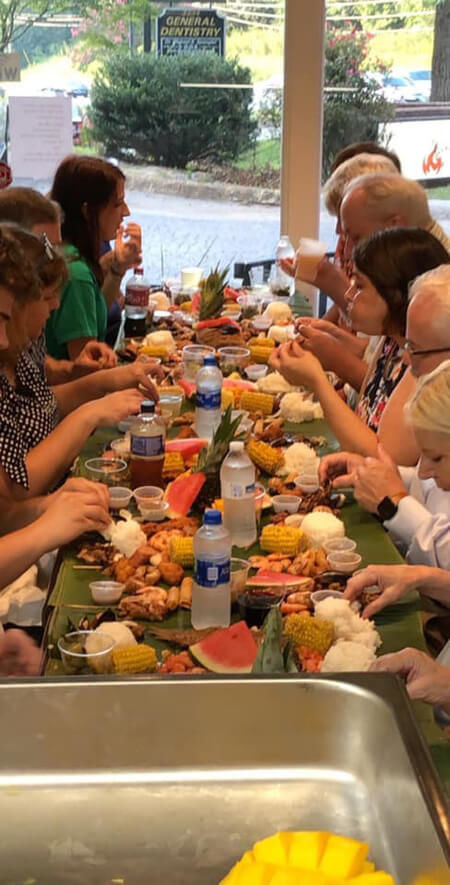 It was a feeding frenzy as nearly 40 fabulous foodies gathered for a one-of-a-kind feast: A Chef’s Table at Asian BBQ & Grill that left us all ever so slightly painfully, but blissfully full on fellowship, Filipino cuisine and hospitality. When owner Robert Lumbres said he wanted to be a part of the monthly dinner series, one would expect the traditional coursed or family-style dinner.

But no, Lumbres wanted to share what he says is the ultimate showcase of Filipino hospitality: A traditional Kamayan Feast. Also known as a Boodle, a Kamayan Feast is kind of like the “luau” of the Philippines. Think long, community-style tables covered in banana leaves, and on the banana leaves, every type of food imaginable. There were no utensils allowed, so clean hands were a must. Gosh, what fun!

Asian BBQ & Grill opened earlier this year at 3230 Reynolda Rd. in Winston-Salem. It is the first Asian restaurant serving traditional foods of the Philippines. From the much-beloved lumpia (a slim, meat-filled, spring roll that’s fried to crispy perfection. Also the most popular item) to barbecue chicken, chicken on a stick, pulled pork, fried rice, and noodles. And the desserts? Mango, purple yam (aka Ube) ice cream, and crispy spring rolls filled with soft, sweet plantains.

“Filipino food is a medley of so many cultures,” Lumbres said. “The Philippines has been conquered so many times; we are now like our famous dessert, halo-halo, where you have a fusion of different flavors and textures. Our food has been influenced by Spain, China, India, and Japan. Even the people and their names are a medley of all the countries.”

But it’s sharing and fellowship that they pride themselves on.

“When you come to a Filipino’s home, expect to eat, because someone is always cooking,” Lumbers said.

Asian BBQ & Grill is a small restaurant, and though there are some tables and chairs, its concept is set up to be very take-out friendly, which is great if you don’t feel like cooking. The goal of the Boodle was to not only share the experience but give the diners a chance to try almost everything (and more).

“Many people have never seen blue crabs, so I thought that was a fun learning experience. The typical Boodle is a medley of seafood, barbecue, fruits and veggies, whatever is in season.”

When we walked into the restaurant, the tables were lined with banana leaves, but it wasn’t long before the culinary and service teams began diligently placing items on those tables — first, crispy whole tilapia. Then sticky rice, pork belly, pork barbecue, chicken skewers, rice, mango, pineapple and bok choy. Also on the table, all the elements of a seafood boil including clams, mussels, shrimp, smoked sausage and corn. If that wasn’t enough, there was also a fried eggplant (prepared by Rob himself) and whole crab. To say it was a huge amount of food is an understatement. Most of us were stuffed by the time we were presented with Mamon, a small cake deeply colored from purple yam but tasting very much like a vanilla cake, crispy fried plantains, mango ice cream, Ube ice cream, and a few desserts that were snuck in that some of us didn’t even get to for being under the influence of food.

Barrie Podair of Winston-Salem has been to many Chef’s Tables. She said she was full the next day after an experience with Filipino food.

“I expected to try a wide variety of food, and it seemed like as soon as you stopped, it was like ‘But wait! Here’s more,’” she said. “When you’ve never had the cuisine and don’t know what to order, it’s nice to have a little bit of everything. And having plates and using our hands was not weird to me at all, because I have a toddler.”

Ashley Creviston, who scored some last-minute tickets from the waitlist, said, “Feast doesn’t seem like a big enough word to describe this culinary spread. The lack of utensils certainly did not slow down our indulgence, and the food seemed endless.  It’s hard not to have a good time when you are literally elbow-deep in some great Filipino cuisine.”

Because Asian BBQ doesn’t serve alcohol, Cellar 4201 Winery and Incendiary Brewing were brought in for drinks.

Looking at the aftermath, Lumbers said, “We like full. It’s our purpose.” Although he joked, “If Filipinos had been here, there would only be banana leaves and shells remaining.”

Lumbres said the restaurant has been consistently busy and that catering is very popular as well. With the talent and leadership of Chef Ruth and Chef Rod, he hopes one day to open a larger restaurant with some hang out space. And anyone who wants to book a Boodle can do so by reservation.

Mary Haglund, the owner of Mary’s Gourmet Diner, spent many years as a girl in the Philippines and was there to offer her support.

“I had so much fun sharing my love for all things Filipino. The food, the people, the hospitality,” Haglund said, “food brings us all together.”

The next available Chef’s Table is a Triadfoodies Friendsgiving on Monday, Nov. 18, 7 p.m. at Providence Restaurant. Tickets are $50, and 100 percent of proceeds will benefit Second Harvest Food Bank of Northwest North Carolina. Reserve tickets online.