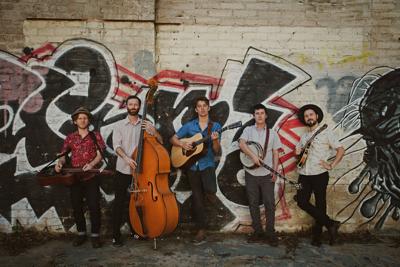 Celebrate the glorious return of live music to the Willingham Theater stage!

(YADKINVILLE, N.C.) — The Willingham Theater is back with live music on the stage for the first time in a year and a half! They are celebrating this occasion with none other than the fan favorite Americana Folk group “Fireside Collective”! This show will be held on August 7, 2021 at 7:30pm in the Willingham Theater.

A quintet who cheerfully disregard every kind of one-dimensional label that might be attached to their music, Fireside Collective has been on a roll since emerging five years ago from the fertile roots music scene of Asheville, North Carolina. In quick order, the progressive bluegrass group released its debut album, won the 2016 Band Contest at MerleFest, earned an International Bluegrass Music Association Momentum Band of the Year nomination and embarked on an ambitious touring schedule that’s earned an enthusiastic reception from traditional bluegrass to wide-ranging, eclectic music festival audiences alike.

Blending the characteristic interplay of bluegrass instrumentation and harmonies with strong original material and exuberant energy, Fireside Collective has drawn on folk, blues, funk and a wide variety of bluegrass sounds to create a distinctive body of work that’s all their own.

Each member—Joe Cicero (guitar); Alex Genova (banjo); Jesse Iaquinto (mandolin); Tommy Maher (resonator guitar) and Carson White (upright bass)— brings a strong, original voice to his instrument, and the unique contributions of different lead and harmony vocalists complement the variety in the group’s many original songs. “Depending on where you come from and your experience with folk music, you may think we’re very traditional, or on the other hand, consider us a progressive act,” says Iaquinto. “We appreciate both ends of the spectrum and may lie on a different end on any given night.” But whether they’re bringing the classic sound of bluegrass or exploring new musical territory, Fireside Collective delivers a fresh, energetic approach and a blast of enthusiastic creativity that’s electrifying audiences across the country.

About the Yadkin Arts Council

Transforming lives in our community through the arts by offering opportunities to encounter, create, and participate is the Yadkin Arts Council’s mission. We believe art is transformational.  Arts open minds, frees imagination, and helps people see the world from different perspectives.

The Yadkin Arts Council is a nonprofit 501(c)3 organization dedicated to enriching the lives of Yadkin County citizens through the arts. In September, 2010, the council opened the Yadkin Cultural Center, providing a home for the arts in Yadkin County. It encompasses the Welborn Gallery, the Willingham Theater, the Center Bistro, classrooms and meeting rooms, staff offices and working artist studios

About the Willingham Theater

The Willingham Theater hosted its first performance in December 2012, just two short years after the Yadkin Cultural Arts Center opened its doors to the citizens of Yadkin County. While many might dismiss the power of a small city theater, we like to prove that we can indeed bring the big city excitement and experience to our small town. Our state-of-the-art theater seats 193 patrons and showcases a variety of engaging performances ranging from music, dance, drama, comedy, and even film. In addition to ample seating, the Willingham Theater has remarkable state-of-the-art-technology. The Willingham Theater is owned and operated by the Yadkin Arts Council.