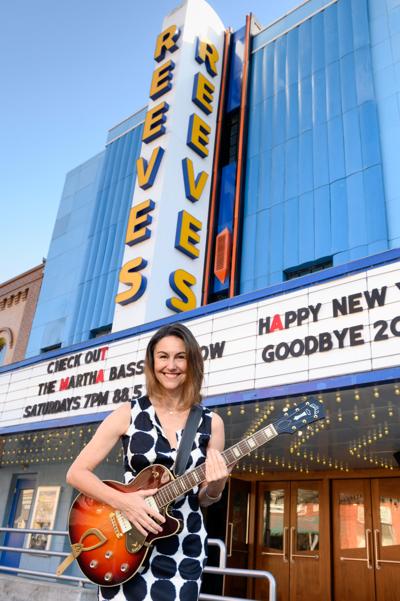 The Martha Bassett Show is swinging into its fourth season, streaming twice a month, live from the Reeves Theater, through November.

As an artist, Bassett has released 11 records, performed across the country and at major festivals, including Merlefest, the Eastern Music Festival, and Shakori Hills. As a host, she’s committed to uplifting area artists and showcasing the diverse wealth of talent in our neck of the woods.

“I’ve been in the NC-music scene since the mid-90s, and there are so many great artists who deserve a bigger platform,” Bassett explained of her motivation. “I’d like to bring more awareness to North Carolinians of our own homegrown musicians and for listeners around the world to see NC as a destination for live music.”

When operators at the Reeves approached Bassett for programming, she and her producer (and partner) Pat Lawrence seized the opportunity.

And while they hadn’t intended on developing a regular broadcast show, they continue relishing their roles—four seasons in—adding a podcast and radio show along the way. “We’ve been learning as we go,” Bassett said. “Pat has really come into his own as a producer. It’s a huge undertaking to create a weekly radio show, and to perform, and be the announcer for the live shows.”

While the show took a pandemic pause shortly into season three, it returned with an accompanying radio show on WFDD Saturdays at 7 p.m. and broadcasts, in partnership with the ArtsCenter in Carrboro, as part of ArtsCenterLive, every third Saturday at 7 p.m. “Radio was always our goal, but sometimes I still pinch myself,” Bassett said of the show’s foray into syndication. She’s also hopeful live audiences will return sometime during the season.

While a solid band, and a steady team, have helped the show’s success, the artists—supported through Bassett’s curation—remain the cornerstone. “I keep my eyes open for good music all the time,” she said. “I’m trying to cultivate a show the audience can trust will bring them something good, whether they’ve heard the artists or not.”

The lineup features plenty of acclaimed artists and Grammy award winners—the show on May 20 will feature two 16 year-olds who’ve both already been on the Grand Ole Opry—but, as Bassett explained, “the show isn’t necessarily built around people with name recognition. It’s built around people we respect.”

And in that regard, inclusivity is salient. “It’s my goal to have gender, generational, racial, and genre diversity as much as possible,” she added of her booking process. “Jim White was one of the first people I booked, and he has sent several other artists my way, like Elizabeth Cook, Sam Baker, Minton Sparks, and (upcoming) Ben de la Cour.”

The roster sometimes features returning artists, like Presley Barker (who’ll appear on May 20) and Charlie Hunter (as part of the Sam Fribush Organ Trio on June 17), and Chance McCoy (of Old Crow Medicine Show).

McCoy’s last appearance was with Matty Sheets in season three. Sheets is but one of many Triad notables who’ve played the show, including: Laurelyn Dossett, Abigail Dowd, and Casey Noel. Along with Caleb Caudle, Snüzz, Andy Mabe, and Jeffrey Dean Foster, who’ve also graced TMBS—which serves to highlight North Carolina music, thus far mostly sampling artists from Triangle and across the Tennessee border.

Season three closed with Violet Bell and Chatham Rabbits, and Appalachian artist Sarah Kate Morgan is scheduled for June 3, along with Dom Flemons (of the Carolina Chocolate Drops).

With a venue nestled in the Foothills, TMBS hosts plenty of flatpickers and bluegrass while also building bridges to national acts like Jill Andrews (of the Everybodyfields), Heather Maloney, Molly O’Brien, and NPR Music’s Tiny Desk winner Gaelynn Lea.

For Bassett, “the real fun” comes from “putting different kinds of artists together on the same show, and seeing how they complement each other.”

That outlook has created lineups that sandwich Bruce Piephoff between an accordionist (Sam Reider) and the Dan River Girls (a string band of teenage sisters). One show paired alt-country blues from Amythyst Kiah with Riley Baugus’s old-time banjo. And an episode in season three had honkey-tonker John Howie, Jr. and hip-hop artist Sonny Miles.

“Variety is the spice of life!,” said Bassett, who’s known to cast a wide net of styles herself. She’s into bossa nova these days, a samba from 1950s Brazil, which she explores in Duo Brasil, her latest project with Russell Kelly. The two play bossa novas on guitars, with vocals in Portuguese. Their recent debut at the Gas Hill Drinking Room harkened Bassett’s pre-pandemic “Moodswing Mondays” jazz residency, which Bassett expects will eventually return.

But for now, season four of the Martha Bassett show is in full swing. Presley Barker returns with EmiSunshine on May 20, followed by Dom Flemons and Sarah Kate Morgan on June 3 and Martha Spencer and the Sam Fribush Organ Trio are on June 17.