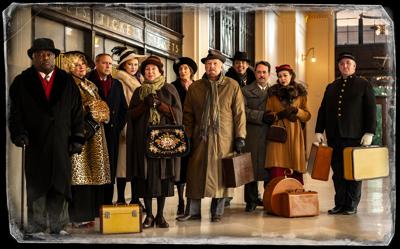 The Little Theatre of Winston-Salem will present Agatha Christie’s Murder on the Orient Express, adapted for the stage by Ken Ludwig, on Friday, October 15, at the Hanesbrands Theatre, 209 N. Spruce Street in Winston-Salem.  Additional performances will be held October 16-17 & 21-24.  Thursday, Friday, and Saturday performances are at 7:30 pm; Sunday matinees are at 2 pm.  There is an additional Saturday matinee at 2 pm on October 23.  Tickets range from $14-26 for adults (plus taxes/fees), with discounts for students, seniors, and groups of 10 or more.  Tickets are available online and the box office is open for phone sales Mondays, Wednesdays, and Fridays from 12–4 pm.  Call (336) 725-4001 for tickets or purchase them online at www.LTofWS.org.

Just after midnight, a snowdrift stops the Orient Express in its tracks. The luxurious train is surprisingly full for this time of year, with its elegant and somewhat eccentric list of passengers. As morning dawns, however, the train is one traveler short: an American tycoon has been found stabbed to death in the bed of his private compartment. Isolated and with a killer in their midst, adroit detective Hercule Poirot must identify the murderer – in case they decide to strike again.

First published in 1934, Agatha Christie’s classic mystery, Murder on the Orient Express, is considered one of the author’s greatest literary achievements.  Over the years, the story has been adapted to radio, television, two popular movies, and even a board game. It was not until the Christie Estate approached American playwright Ken Ludwig (Moon Over Buffalo, Crazy for You, Lend Me a Tenor) to write a stage adaptation, however, that the plot-twister was turned into a play.  It premiered in 2017 and has since become one of the most-produced plays in America.

Murder on the Orient Express marks Ron Law’s 94th production as director.  “Agatha Christie continues to be one of the best-read authors of all time,” he commented. “I previously directed and produced two of her plays - The Hollow and And Then There Were None and I loved doing both.  I really like mysteries and directing a mystery is much like solving one.  This play is a fast-paced murder mystery with a dose of Ken Ludwig humor blended in.”  Law last directed The Miracle Worker and Deathtrap for The Little Theatre in the 1970s.  The long-time executive director for Theatre Charlotte, Law recently retired and is becoming acting once again in the Winston-Salem theatre community.

Murder on the Orient Express will be directed by Ron Law.  Joel McKenzie will design the set, with lighting design by Shawn Hooper.  David Rawlins will serve as sound and projection designer. Dinny Forbes will design costumes, assisted by RoseLynne Bowman, and Sophie Wood will serve as wig and make-up designer.  Leah Roy will serve as dialect coach.  Elizabeth J. Rief will stage manage the production, assisted by Christa Hitengoku.

The cast is as follows:

Butler + Burke, CPAs will sponsor the run of Murder on the Orient Express.  An Opening Night Reception, with complimentary wine and hors d'oeuvres, courtesy of Raffaldini Vineyards and Compass Financial Services, will be held on Friday, October 15, beginning at 6:30 pm.

Murder on the Orient Express runs approximately two hours long, including one 15-minute intermission.  This comedy is recommended for ages 12+ due to adult themes and violence.

PLEASE NOTE:  The Arts Council of Winston-Salem/Forsyth County requires proof for anyone 18+ of COVID-19 vaccination or a negative PCR lab test result from 72 hours prior to the scheduled event you wish to attend in order to enter their venues (this includes the Hanesbrands Theatre). A mask is also required while inside the building, per the City of Winston-Salem.