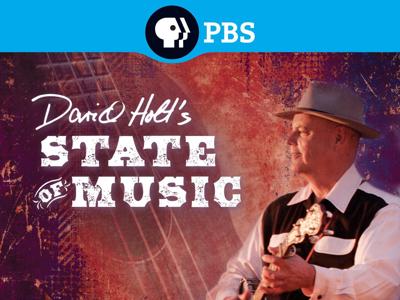 March 30, 2020 – Staying in? Enjoy outstanding masters of American folk and bluegrass on UNC-TV’s main channel as Season 4 of David Holt’s State of Music begins this Thursday, April 2, at 9:30 p.m.

Hosted by four-time Grammy winner David Holt, the season will run on consecutive Thursday evenings through May 7. Episodes featuring the following performers are scheduled as follows:

Josh Goforth and Zeb Holt play with host David in a look back at David’s 50-year career in folk music in Episodes 5 and 6, airing at 9:30 p.m. on Thursday, April 30 and Thursday, May 7.

Times and air dates for other showings nationwide can be found on local station schedules online and are continually updated at DavidHoltTV.org. To search for a show time, click the “Find TV Listings” button there and enter a zip code.

David Holt’s State of Music also can be streamed anytime at PBS.org, on iTunes and through Amazon Prime. Previous seasons are available through PBS Passport, a member benefit from participating PBS stations.

The series is a production of the Will & Deni McIntyre Foundation. Major funding for Season 4 was provided by the Rhea Bigelow Charitable Trust, The Community Foundation of Henderson County and its Perry N. Rudnick Endowment, the NC Arts Council and Come Hear NC, Blue Ridge Music Trails of NC, Cheri and Ron Allari, the J. Lyles Glenn Family Fund, A Bar A Ranch, Carlyle Adams Foundation, Fritz and Renee McPhail, Ben and Laurie Duke, the Chatham Foundation, Myrna Harris, Charlie and Lois Brummitt, Lee and Margaret French, and Rich and Jenny Schwartz. A complete list of underwriters is available at PBS.org.

The Will & Deni McIntyre Foundation is a 501(c)(3), charitable nonprofit established in 2009 to raise the profile of the arts and educational organizations through the creation of videos, books and photography for websites and related media. It is the prime fundraising entity for David Holt's State of Music.

To help celebrate and preserve the traditional and modern musical heritage of Appalachia, please consider supporting the production of David Holt’s State of Music by making a tax-deductible contribution to the Will & Deni McIntyre Foundation at WillandDeni.org.