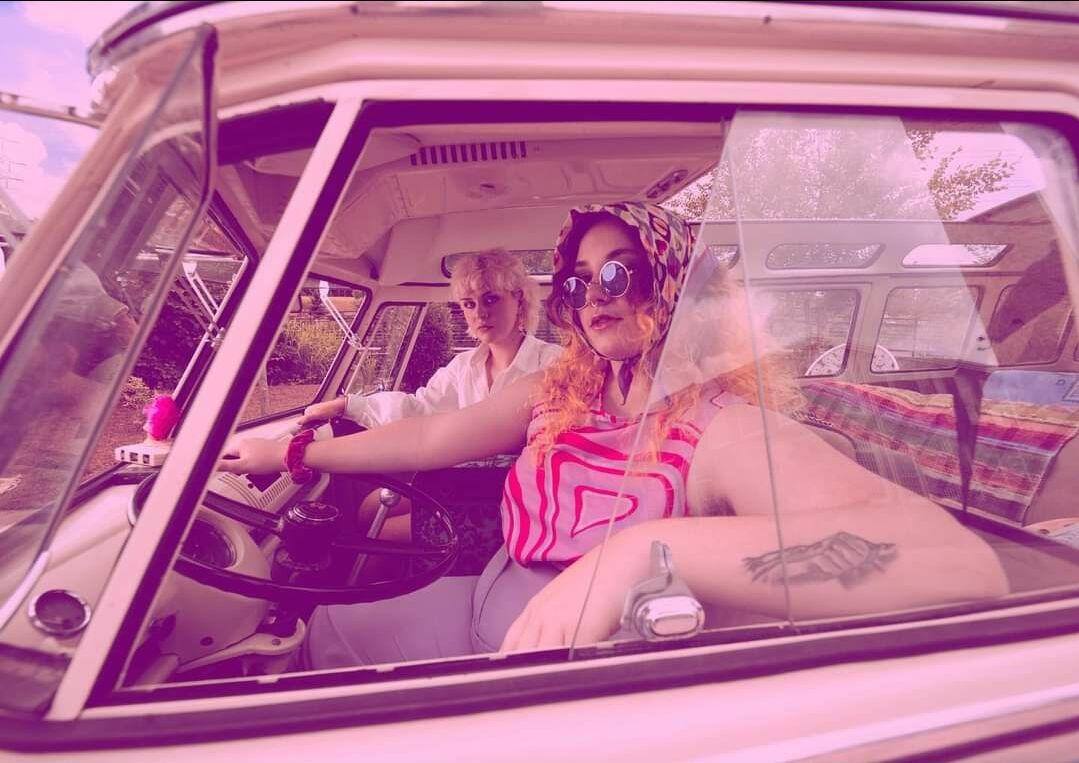 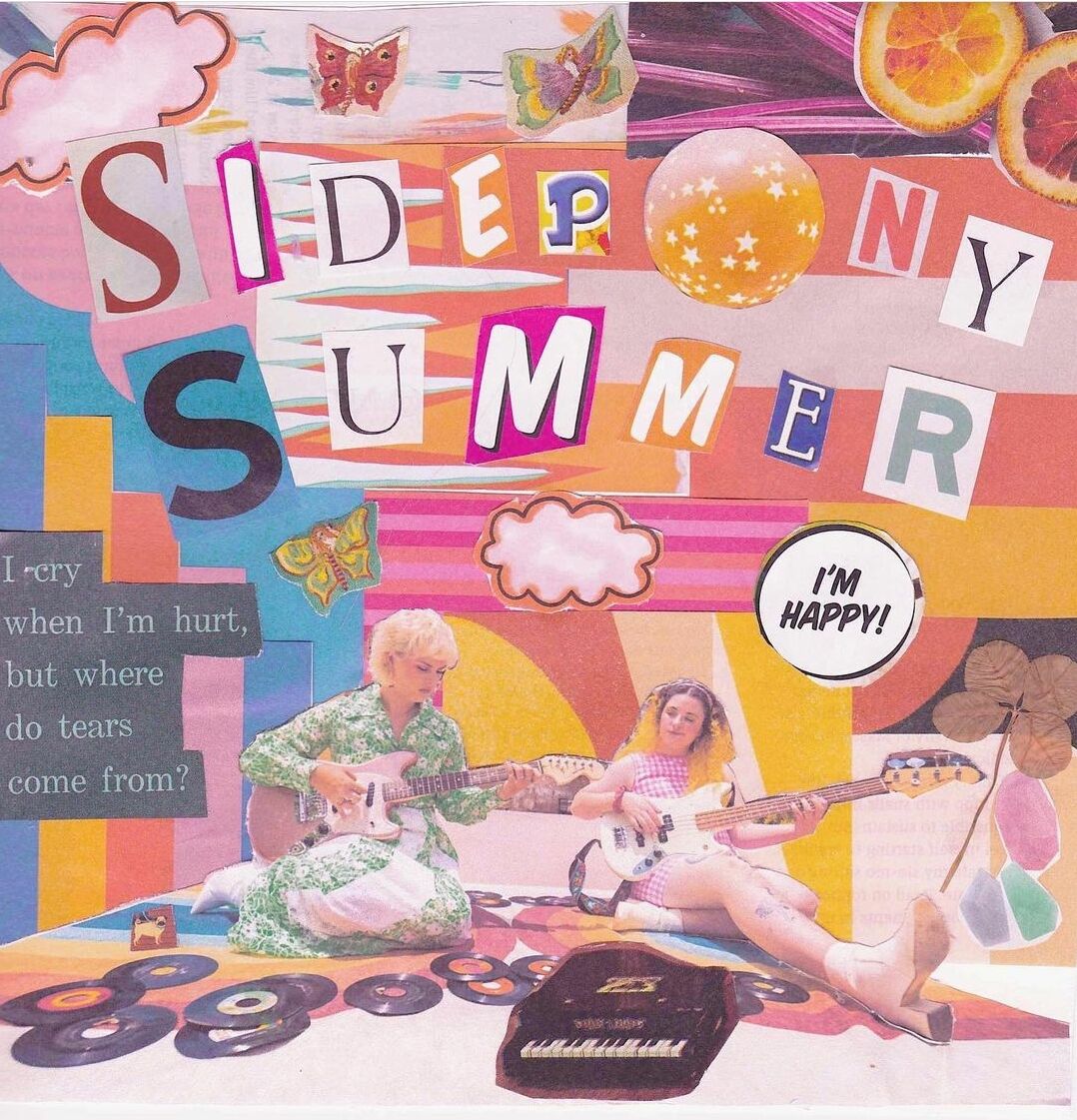 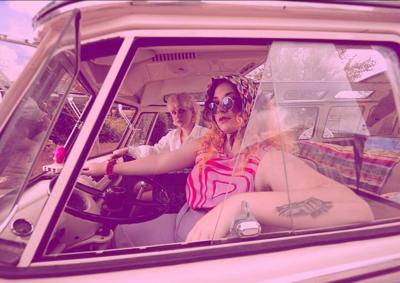 Greensboro glitz-pop duo Sidepony is riding the sunset of their “Summer” EP, saddling up for the release of “Fall,” and rounding out their full band incarnation—all the while hosting a weekly radio show pushing tunes from queer and marginalized artists over the airwaves on WUAG 103.1.FM.

On the Sidepony Sideshow, the two friends and cowpokes elevate voices of the underserved and underground—well, technically, only one has equine experience. MacKenzie (“DJ Macca”) Craig still works summers at the YMCA horse camp she attended as a kid growing up on a Summerfield horse farm. Stephanie (“DJ Scuba”) Coolbaugh, by contrast, has never even been on a horse.

“My life will be made the day I do,” Coolbaugh said—highlighting the coincidence of their horse connection and band name. “It’s based on the hairstyle we both rocked as kids,” they explained. “Our imagery centers around embracing femininity as a means to challenge stigmas of women and feminine people not being taken as seriously.”

Sidepony actually came from a list of more than 400 band names Craig has dreamt up over the years. “Reading them off makes good stage banter,” Coolbaugh noted, explaining the importance of names in developing the “Sidepony Sideshow,” their radio program that began as “Women Wednesday” in 2018.

“The motivation has always been to bring more awareness to female, LGBTQ+ and BIPOC musicians, because their music often has more compelling, nuanced narratives that are so easily overlooked due to systemic bias,” they explained of the Sideshow’s origins. “We switched to widen our scope and be more inclusive to other marginalized groups that were also creating music that excited us. We didn’t want to put our programming choices into a box, or categorize people that way, either.”

Currently running Thursdays from 3 to 5 p.m., the Sideshow (and their involvement with college radio) offered avenues into the DIY music community, which brought them together as a band. “It really opened our eyes to the fact that making the music we always were inspired by was a doable thing,” Coolbaugh said. “But we still saw so few women, and wanted to add more to the table.” They shared their first bill with Debbie the Artist and Ashley Virginia at a femme-oriented house show in 2019, both of whom performed as part of #RepresentNC—Molly McGinn’s residency of a similar charge—which featured Sidepony for one of its last rounds in February 2020.

And while the two “choir kids” had a musical background as students of classical voice, they took a “headfirst” approach into indie performance. “We figured the best way to learn was to just do it, and kind of ‘fake it till you make it,’” Coolbaugh said of honing their stagecraft and recording production—which remains vocally driven and heavy on the harmonies. “We try to incorporate the value we see in the voice as an instrument,” they added, “which isn’t always explored to its fullest potential in the indie world.”

Along for the ride is producer (and occasional drummer) Hudson Waldrop, who’s helped record all three Sidepony releases thus far. “We feel more comfortable in our musical identities and play around with new musical techniques that excite us with each record,” Coolbaugh said, pointing to added guitarist Daniel Carr, and drummer Jacob Fleenor. “It’s also helped to now have a killer band.” Together, they started tracking seasonal EPs starting with “Summer” (released in July) and culminating in the debut LP, “Chrysalis” (scheduled to drop next June).

With “cheeky lyrics that emulate both the fun and the consequence of wearing your heart on your sleeve,” the three-tracks on “Summer” offer a sampling of dreamy waterfront serenades, mid-tempo beats for hitting the town; and the sort of “wild-card hype” that bursts with summertime energy.

Ranging influence from Girlpool and boygenius to Brandi Carlile, Mitski and Emily King, Coolbaugh finds fun in playing around with various genres—popping around folk and bubblegum riot grrrl. ”We live in the coexistence of shiny and sparkly, yet clearly influenced by emo and punk,” they said. “Our tunes search for all that glows in the dark, emulating a feeling of pride in accepting every part of yourself and others, even the ones that are challenging.”

On that search, Sidepony centers itself among natural scapes and the stars. “We love to write about nature,” Coolbaugh said. “There’s something humbling—yet exciting—that overcomes us when we think about how much beauty there is on this Earth, and how we take advantage of it.”

The seasons keep rolling for Sidepony as they excitedly announce an upcoming winter show at the Crown in December with Debbie the Artist, and look to take their new van on an east coast tour by July. Their latest EP, “Summer” is out now, “Fall” arrives on Oct. 29; and the Sidepony Sideshow runs Thursdays from 3 to 5 p.m. on WUAG 103.1 FM.