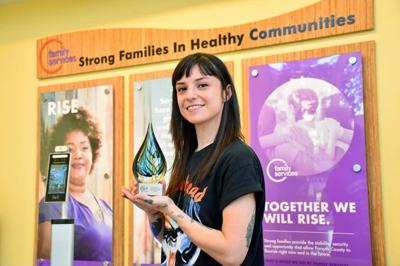 The Winston-Salem arts community mourns the passing of a young music matriarch, Bryn Hermansen: FemFest founder, advocate for survivors, and champion of underdogs (and all dogs in general.)

In the weeks since Hermansen, 30, suffered a fatal stroke, friends and loved ones reflect on her strength and passion; while hoping to carry on her spirit of advocacy for victims and support for artists.

Hermansen’s grit, and disdain for abuse, are ingrained in those who knew her best. “Bryn never hesitated to stand up for the people around her,” said Hermansen’s partner, Andrew Pino. “She hated bullies,” he continued. “Her message was simple: it doesn’t take much to make things a little bit better—small actions can change people’s lives. More importantly, showing people a little bit of love can change their entire view of the world around them… and I think that ripple travels farther than you imagine.”

Recurring FemFest performer, Billie Feather, echoed Hermansen’s dedication. “Bryn was a champion for the misunderstood, the forgotten, the ignored, and the abused,” Feather said. “She found a way to connect the underground and unserved communities with places that could truly help them and make a difference in their lives. It was through this work that Bryn synthetized FemFest, a yearly festival celebrating women in music and devoted to the cause of recognizing domestic violence in all forms.”

Starting in 2013, FemFest has served as a platform for femme artists and fundraisers for Family Services of Forsyth County. Sarah Burns, FemFest Donations Manager, said, “Bryn brought together bands from near and far, along with local businesses, and artists to raise more than $12,000 over the past seven years.”

“When 2020 presented a new challenge,” Burns continued, “Bryn said FemFest absolutely still had to happen because the women’s shelter needed those funds more than ever. In a time when organizing an event seemed like an impossible task, she didn’t care about how much more work it would be; the funds were needed, and she would find a way. That was Bryn: selfless.”

For her efforts, Hermansen received the “2020 Outstanding Emerging Philanthropist Award” bestowed by the North Carolina Triad Chapter of the Association of Fundraising Professionals.

“In a world with its cover torn off,” said representatives from Family Services (who provided Hermansen’s nomination) FemFest, “managed to move the annual concert completely online and still come away with the biggest donation ever — more than $5,100 — to benefit our Shelter for Domestic Violence.”

Upon her acceptance, Hermansen provided her own personal outlook. “Philanthropy, to me, is the simple act of utilizing any privileges you have to really help leave this world a little better than when you got here,” she said. “Whether those privileges look like time, connections, experience, or just a stable mental health day, it only takes a definitive first step to doing your part.”

And in her absence, those simple acts continue making “the world a little better. “Not just for survivors, but also for folks in search of tunes, coworkers, her friends, community, and spaces.

“Bryn not only partnered with us with her charity FemFest but was also active behind the scenes during the worst parts of the pandemic in an effort to ensure our survival,” said Carlos Bocanegra from Monstercade. “We’ll forever be grateful and indebted to her for all her love and support throughout the years.”

Hermansen’s passion for advocacy was symbiotic with her love for music. In addition to curating FemFest, she hosted “the Bryn Show,” an internet radio program aimed at promoting underground acts. “She always turned me on to new music,” said Burns, “and I knew if she suggested something, I needed to give it a listen.” For Feather, “Bryn had the musical Midas touch. Whenever I would go combing the town’s music venues in search of a music to see on any given night if Bryn was there – I knew it was going to be a great show,” she said. “Winston-Salem has lost one of its biggest musical allies.”

The sentiment is echoed through FemFest fans and performers like Reese McHenry and Sarah Shook, who expressed condolences—with McHenry calling Hermansen a “shining bright light” and Shook noting, “Bryn was one of the kindest forces for good I’ve known.” Laurie Ruroden from Spirit System noted the ways Hermansen “touched an entire community with her compassion, strength, and spirit.”

Writer Katie Murawski agreed, “Bryn did so much good for the Triad area by giving a platform to femme-led bands and musicians. This community won’t be the same without her.”

Looking back on the power of FemFest, Burns noted, “Bryn didn’t just create an annual event, she built a platform to educate the public. When she took the mic, you knew she was about to voice wisdom that most of us never possessed in our 20s, and we listened. Bryn spoke from the heart; you could tell she was a true empath. She empowered all, and we were all fortunate to have known her.”

It’s during those times at the mic that Hermansen’s brother, Chris, remembers her best—noting her speech at the 2018 FemFest as being amongst his favorite memories.

Hermansen brought the same energy to her work beyond music. “She was also extremely proud to have recently been promoted to assistant manager at McKay’s in Winston,” Chris said while highlighting her love for her dogs, Sid, Magic, and Nancy.

“Despite her small feet, she left some really big shoes behind for all those impacted by her generosity and empathy,” said McKay’s co-worker, Jessica Webb. The two shared a love of silliness and Spice Girls, with Webb remarking on the true sense of “Girl Power” Hermansen exuded.

“Bryn has been financially and emotionally supportive to so many artists and women of the area,” Webb said. “When I started making earrings, she was one of the first people to buy a pair, and when the pandemic hit, and I started toying with the idea of making and selling face masks, she immediately claimed two before I had even finished making them.”

Hermansen’s absence leaves a void that not only ripples throughout the community but also, most tragically, within her family—having been preceded in death by her mother by only a few days. There isn’t currently a date set for public services. A gofundme has been established to ease the family’s burden.

Friends hope to turn their loss into a push towards Hermansen’s honor. As Feather noted, “when a mighty woman leaves us, we’re all heartbroken, humbled, and called to roll up our sleeves to keep the forges of her work burning.” Webb, with the blessing of the family, is cataloging an online memorial of photos and memories. Submissions can be sent to photosofbryn@gmail.com.

For Burns, “I think Bryn would be stoked if people listened to the artists she chose for FemFest and supported Family Services,” she said, adding, “Bryn made me a better person, and I know that wasn’t something exclusive to me.”

Katei Cranford is a Triad music nerd who hosts the Thursday Tour Report, a radio show that runs like a mixtape of bands touring NC the following week, 5:30-7 p.m. on WUAG 103.1FM.