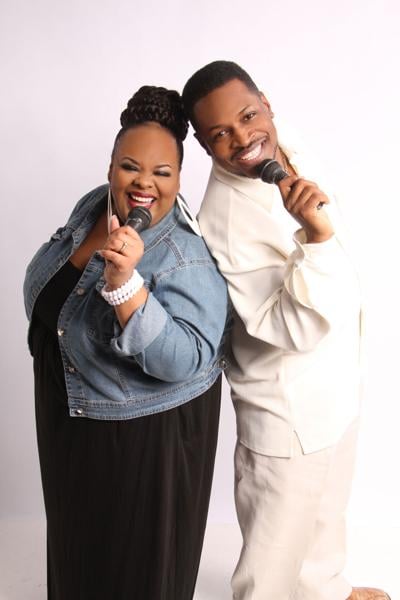 Raymond and Kim Larkin have found real love for themselves, which they embody and explore as a duet—with a mission to share through Real Love Music.

“Real Love Music was ignited through our passion for music and each other,” said the pair, who consider themselves “inspiring singers, creative songwriters, and life-long best friends in marriage.”

“The concept describes our relationship as a couple and what we love,” added the couple, who seem to live the way they shared their answers: in harmony. The practice extends to their videos, which often start like newlyweds on a landline answering machine.

“This is real love music,” they say together, in-sync. It’s befitting of their self-generated genre of “Love and Inspiration,” a concept, as they put it, “uniquely derived from the melodies and message they share.”

Those melodies resonate through both their life and music. “We believe our purpose is not only to share great music,” they said, “but to display and encourage others to experience FUN in love and life!”

While Kim couldn’t “have ever imagined” the singing career which has unfolded—their families and upbringing hinted at what was to come. “We both come from families with a talent for singing,” the couple said of what attracted them to song, “and we both come from backgrounds of singing in church and school as kids.”

As it was the church that got them into singing, so was it the church that brought them together. “We were familiar with each other since our churches would fellowship together.” They officially met in 1998, began dating in 2004, and were married on Sept. 30, 2006.

Their first duet also came from church, in 2005, as the then newly-engaged couple performed at a baptismal service in Lake Norman. “A friend invited us to come, and that was our first time singing together,” they explained. The crowd of strangers and friends alike could see the two had something special.” Bystanders thought we had been singing together for years. “

“Shortly after the Lake Norman event, we knew there was something unique about us singing together,” they noted. They married the following year—performing “their song,” “When God Made You” by New Song (featuring Natalie Grant) as part of the ceremony.

By 2007, they had officially formed a singing group, with recording for their first release underway—using music, as Grant sings in their wedding song, to “solve the mystery of how two hearts can come together.”

Like any good couple, they roll with the tides and keep things fresh, and in their pursuit, Real Love Music has taken many forms. “From 2007-2010, we operated under the name Real Love Ministries because we sang mainly for church events at the time,” they explained. “In 2011, we understood more about our purpose and realized that singing ‘love and inspirational’ music is what we enjoyed the most. Therefore, we updated the name to Real Love Music.”

The pair is especially fond of gospel singer Fred Hammond, with whom they’ve performed.

Looking back on the experience so far has helped define their motto of “bringing fun back to love through music and entertainment.”

“Every so often, we evaluate where we are in our musical journey,” they explained of the process. “We felt like our music had captured the “definition” of our love, so now the focus is on what we do with that. In our relationship, we like to have fun. So we bring more of that in our music and shows.”

They keep the fun in their relationship by keeping their focus, “don’t let distractions deter you from what matters in your life,” they advised. For themselves, “we have weekly date nights on Fridays—we’ll go to dinner and a movie which seems simple, but we love it.”

The simplicity extends to their grounds of putting their relationship first. “Our marriage relationship is the highest priority, which is what will reflect on any stage,” they explained, “it’s not always easy working together because we have differences of opinions at times. But we always try to find a median.”

And it helps to have fun. “Over the years, we’ve learned a healthy balance between home life and music life,” they said. “The work we have put in is never stressful because what we love to do is not seen as ‘work.’”

That balance is managed through roles they’ve cemented within their songs. “Kim is more of the songwriter and melody specialist,” they noted, “and Raymond is more of an arrangement specialist.” The pairing has worked throughout their recording history, beginning with their first release, “Love Defined,” in 2009.

For production, the pair collaborated with Roderick Carter of House of Phat, and Producer Luguzy Atkins, with whom they’ve continued to work with for follow-ups: “I Love You” (2014), “Celebrate Love” (2016), and “Every Christmas With You” and “Rock 2 the Rhythm,” (2018). “We have a great working relationship,” they said of their production team, “and have all grown better musically.”

The couple celebrated the “Celebrate Love” single with a video filmed by Okeeze Artz Videography. “It showcases couples, along with friends and family, in the community just celebrating love,” they explained of the video, which features the “Real Love Shuffle,” a dance created by Smooth Grooves Urban Ballroom Dance.

Beyond their releases, the couple looks fondly on where Real Love Music has taken them—and where they look to go. “We love to perform in intimate settings,” they said, though they’ve enjoyed performing at “concerts, festivals, fairs, weddings, birthdays, anniversaries and sporting events.”

They’ve had the pleasure of singing the National Anthem for various sports teams, including the Charlotte Hornets, Winston-Salem Dash, and a crowd of 8,000 at the Greensboro Grasshoppers Pre-July 4th game in 2017.

Other honors they’ve enjoyed range from a nomination for “Best Duo” at the 2019 AMG Heritage Awards, to opening for Men at Large and the Rude Boys, and performing for the Ben & Jerry’s Summer Music Series.

They also treasure memories of attending the Carolina Bridal Show in 2018, playing at Jackie’s Place in High Point, concerts they’ve hosted at Dynacon Event Center, and their first concert breakfast at Chandlar’s Florist & Coffee House. “The concert breakfast was unique because breakfast was served prior to the show,” they said, “while the guests were serenaded by a harpist.”

Around this time in 2020, they spread the love at a Valentine’s Soiree presented by Dynacon Event Center. These days, they’re only performing for private events following pandemic protocols. But hope to return to larger stages soon.

The couple is keeping things low key for Valentine’s Day this year. “We plan to have a nice dinner. Maybe watch some romantic movies on Netflix,” they said, noting Raymond’s knack for surprising Kim with flowers and balloons at work. The couple still finds joy in “little things like holding hands and looking into each other’s eyes.”

Their Valentine suggestion for couples is simple: “Be sure to spend quality time with the ones you love without hesitation,” they said. “Enjoy the moment and be present in it.”

Taking their own advice, they continue enjoying moments together and finding ways to connect with audiences through new means—like TikTok lip-synch videos of characters, and snippets fans of Martin and Coming to America are likely to enjoy. Kim’s personal favorite she’s filmed so far, called “Hey, how y’all doing?” has more than one million views.

Eyeing the future, they’re working on new songs and hope to release a new music video later in the year. And the couple has something special in the works for the 15th wedding anniversary they’ll celebrate later this year. But beyond that, the future is out of their hands. “Our hope is that someone can look at our lives and see God’s love,” they explained. “We’re far from perfect and are still learning how to deal with life. But in the midst of it all, we can still expect good and enjoy life to the fullest. We hope to spread love and hope globally.”

Raymond and Kim Larkin have found real love for themselves and look to share that with the world through Real Love Music.