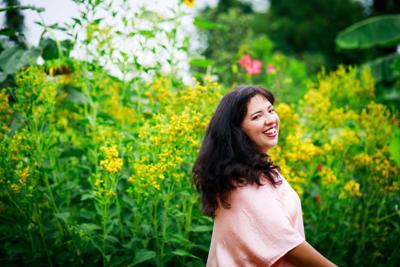 Mixing elements of heritage and genre in tune with body and space, The Handbook of Vivid Moments, the third record from Greensboro electro-artist, Quilla— the artistic persona from Montreal-born Anna Luisa Daigneault— serves as a vessel for expression and empowerment in a time of dystopia, laid amongst dance floor beats.

“I want to expand the palette of topics explored in dance music,” Quilla explained of her intentions with the record, which covers themes related to peril, migration, climate change, and personal transformation. “I’ve always thought that dance music is very accessible and that people are receptive to new ideas when they’re dancing.”

The result is an ethereal jammer of harsh realities over hopping beats.

“Each song is a chapter representing a different personal feeling or emotional experience of a moment,” Quilla explained of the work presented, “to remember the lessons I learned on a personal level.”

For Quilla, those lessons incubate between juggling a career, staying creative, rearing a human, and above all (in its own way) producing an album— topics she explored in a recent episode of Bit Rosie, a web series dedicated to women and gender-nonconforming music producers and engineers. Filmed in January, the segment glimpses into the production of the record and workshops for women she’d intended to continue hosting over the summer.

“They were awesome while they lasted,” she said of the series cut-short by COVID-19, noting plans of its return once the pandemic subsides.

Quilla describes her work at the Living Tongues Institute for Endangered Languages and her role as a musician, as two sides of the same coin through which she explores the human condition.

“It’s about finding an application for the art itself, so that is useful in the social context,” she explained of her focus on humanitarian issues blending art and science. “It’s not only to elevate important causes, but to let people feel the rollercoaster of emotions related to that cause, and maybe even heal a tiny bit in the process.”

The pursuit of that condition extends onto the album. “Each song helps me reach a certain type of understanding or emotion related to all the huge changes going on in the world today.”

As coronavirus changed the world, its effects were felt mid-way into production.  “Recording was super fun because I love each song so dearly, but logistically it was a nightmare,” Quilla noted candidly, “I definitely shed tears in the process.”

“The timeline got delayed a few months given all of the ongoing upheavals,” she continued, relaying the difficulty of navigating production in the absence of childcare, crediting the album’s existence to her husband and mother-in-law.

While COVID-19 added particular gravity to already-heavy material, the Latinx rhythms running throughout shoulder the weight, producing a record of overall uplifting jams. For Quilla, whose mother is Peruvian (of Spanish and Indigenous Quechua and Aymara descent), those rhythms symbolize vivid moments of childhood.

“My parents held parties where people danced salsa; we’d hang out in the basement, playing games and watching movies, while all the adults danced upstairs. I wanted to bring some of those stomps and claps into my music. Those carefree sounds are among my favorite memories.”

The power of dance to defy feelings of powerlessness, and the paralyzing nature of the shutdown, are especially felt on tracks like “As the Sea Rises,” which carries lessons of wrangling grief and acceptance amid climate change.

“I wanted to feel like crying while dancing,” Quilla noted of the song, inspired by hurricane damage, and ultimately, celebrates earth.

Heritage holds the key in “Un alma del Norte y del Sur (The North-South Soul),” the “half-cosmic, half-love story,” sung in Spanish, to relay lessons of cultural hybridity, while combining relations of past and present. The song, written during the COVID shutdown, weaves elements of Quilla’s Andean ancestry with a modern focus around her parents becoming a couple.

Modernity rings in “Algorithms with Benefits,” written as a theme song for “Embodied,” a WUNC podcast hosted by Anita Rao. “It’s the lesson of nature as the source of our true power and resilience and beauty,” Quilla explained. “The patterns (or algorithms) in nature shaped humanity over millennia, while the algorithms we worry about on social media can be a distraction.”

On “Boom Bada,” a disco-worthy earworm written for UNC-T.V., Quilla transmits ideas of beauty in different heritages. “We can all be proud of our own heritage and ancestry while respecting everyone else’s heritage. It’s also a song that aims to destroy the ego and selflessly tell others that you love them.”

Hopes to fuel uprisings surge in the anthemic “Bow to the Rebel Queen,” while lessons of balance reign in “Sagittarius,” the first single and Quilla’s astrological sign. Choreographed and directed by the production-duo s/n (Jennida Chase and Hassan Pitts from the UNCG in the Media Studies Department), the “Sagittarius” video screened at five film festivals in 2019. The team is currently working on lyric videos for other tracks.

While celebrating the release of her latest record seems strange without a show, Quilla’s already focused on a collaborative single with Molly McGinn. Her next appearance is as part of Scuppernong’s “Writers Read” literary event, live over Zoom and Instagram, on Oct. 15.

The Handbook of Vivid Moments is out now across streaming platforms.

Katei Cranford is a Triad music nerd who hosts the Tuesday Tour Report, a radio show on hiatus until Tours return.