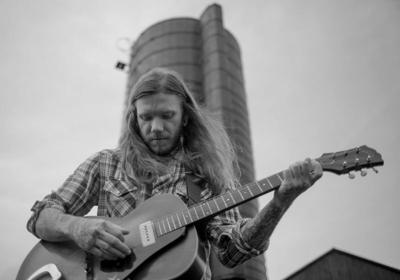 Jeremy Squires sees new waves in his latest album, Many Moons, coming out on Aug. 28 via Blackbird Record Label.

On Many Moons, Squires continues spinning yarns from the heart, and the earth, adding a touch of electronics to an array of sonic textures. The work remains drawn to heavier realms, led by a bipolar existence—surrounded by perils of addiction and loss—grounded by music as a way of dealing and turning things around.

Though his songs share salted, wounded experiences. But Squires, himself, remains far from salty. “I just try to keep living day by day, spending time with my loved ones,” he noted optimistically of pandemic life, ”I keep writing and recording music, with hopes to play in front of crowds again one day.”

“Music is probably more important now than ever,” he added. “Not being able to tour or play shows has made life more difficult, but I love the fact that I can release a lot of music during this time and more people will hear it and connect.”

Connections carry as he’s been using the time wisely, having just wrapped production on the video for “Swan Dive,” his third off the record; and shot in Greensboro by Griffin Hart Davis Productions. The track features Whit Wright on pedal steel, adding a familiar touch to the decidedly less-folky record. For Squires, Wright’s addition brings depth, drawing more emotion from the song, inspired by memories of his late mother.

The first single, “Cast Spells,” finds Squires on his own—fluid and almost dream-poppy. The result contrasts origins of an acoustic duet he’d envisioned with his wife, Shelley Ann. Concepts around the changing of the familiar runs through Many Moons, spilling into the second single, “Labyrinth.” An ode to hometown blues, “it’s a song about living in the same place where you grew up and watching everything change around you,” Squires noted.

He revisits the concept in the video for the synth-laden track, “Hazy,” which features New Bern haunts, coastal forests and county fair scenes. Home and family remain close to the heart for Squires, even as the tides of Many Moons steer him in a new sonic territory.

The record remains anchored to his catalog by source material—an experience of expressing other styles more so than a new working direction. Using songwriting as a sort of catharsis and therapy, Many Moons revisits familiar themes, freshly coated in keyboard tones—echoing the air of the abandoned church in which part of the album was recorded.

“I try to write in a way that the listener can relate, and take something meaningful from the song,” he said. “It’s definitely cathartic for me as a songwriter once the song is finished and I can play it for people. It’s like therapy. I love to experience the listener’s reactions and interpretations of my songs.”

The outlook typically lends his sounds into the folkier end of the shelf, with Many Moons drifting  between Jason Molina and Choir Boy, as opposed to the Gillian Welch or Sharon Van Etten vibes from his most-recently released work, Eastern Glow.

“I was listening to a lot of the Cure, Mazzy Star, and the Replacements,” Squires explained of Many Moons’ artistic influences, also listing acts like Soft Kill, Tom Petty, Jets to Brazil, and True Widow. But he’s quick to note inspirative works beyond music. Movies, poetry, and experiences find their way into his songbook, a notion which carries interest into varied pursuits.

And those pursuits are plenty as plans for books of photography and poetry linger on his horizon, with Many Moons marking his third release since March. “It was a way to keep music in people’s ears,” he explained of using a back-catalogue of unreleased covers and demos to generate support for his latest release. He also recently appeared on Assertion’s “Isolation Collaboration” project, for which he wrote and performed his song, “Burst,” with drums from William Goldsmith (Sunny Day Real Estate, the Foo Fighters and the Fire Theft).

Spinning toward the future, Squires isn’t slowing down, with another record underway. Tentatively titled “Unravel,” he’ll continue exploring ways his own emotions relate to the world at large. “I feel like it covers a lot of very important topics brought on by the pandemic and social movements,” he noted, highlighting their effects on mental health.

For now, the focus remains on haunting cycles of artistry—the ebb and flow of emotion in a world that keeps spinning under Squires’ new album, Many Moons, coming out on Aug. 28 via Blackbird Record Label.

Katei Cranford is a Triad music nerd who hosts the Tuesday Tour Report, a radio show on hiatus until tours return.