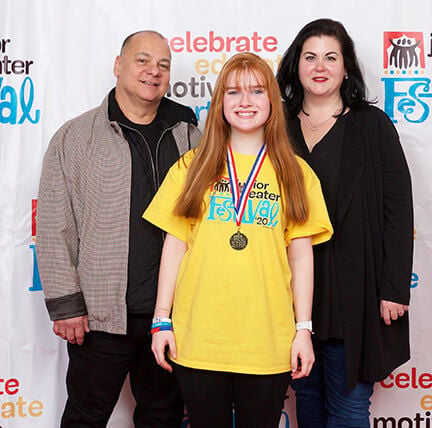 Community Theatre of Greensboro students presented selections from Disney’s Frozen JR. for Mary-Catherine Chambliss, program director of Manhattan Youth at The Anderson School in New York City and assistant choreographer for instructional choreography videos with MTI; Ryan Macaulay, musical director and producer of JTF Europe; and music director and educator Derek Bowley (Kennedy Center tour and premiere of The Phantom Tollbooth, world premiere of The Trumpet of the Swan at the Kennedy Center).

Derek Bowley said, “This well-loved and familiar piece was fresh and fun because of the wonderful performances of these students. They also delivered top notch vocals, from solos to ensemble numbers and brought emotion to the performance.” Mary-Catherine Chambliss said, “The cast worked seamlessly together. They listened and reacted to each moment. Vocally they shined in unison when closing the production.” Ryan Macaulay said, “Community Theatre of Greensboro delivered an excellent version of the classic story we all love. It was smart, funny and heart-warming. Madison Barrier, who played Anna, was absolutely hilarious!”

Community Theatre of Greensboro’s Jack Fresina and Carlie Shaner made it to the call-back for future shoots for “how-to” choreography videos for soon-to-be released musicals.  The shoots will be taped in New York City this summer. The scouts were on the lookout for outstanding students, 125 of whom made it to the final call-back for iTheatrics resident choreographer Steven G. Kennedy. The final cast will be determined later this year. These videos will be used in tens of thousands of schools across the country and internationally.

Community Theatre of Greensboro’s Jack Fresina and Abigail McDaniel were named to the Junior Theater Festival All-Stars, made up of outstanding performers attending the festival. The All-Stars performed a song during the closing ceremony for all 2,200 festival attendees.

Produced by the Junior Theater Group in partnership with iTheatrics, a leading educational theater company that creates innovative experiences and products for both the public and the private sector, the Junior Theater Festival West celebrates young people and the transformative power of musical theater. This year’s title sponsors were Music Theatre International, Disney Theatrical Group, and Playbill, Inc®.

About Community Theatre of Greensboro

Founded in 1949, the Community Theatre of Greensboro is the oldest arts organization in Guilford County. The organization works to bring its diverse community together to learn about, experience, and celebrate the joys of theatre. Its goal is to help everyone in its community share in the excitement of participating in theatre—as actors, backstage crew, or audience members. Community Theatre of Greensboro cherishes diversity and non-traditional casting is a priority.

The Community Theatre of Greensboro has enjoyed many past successes at the Junior Theater festival.

At the 2020 Junior Theater Festival Atlanta this past January, a select group of students from Community Theatre of Greensboro joined their peers from Magic Curtain Productions to sing backup for Nick Christopher on “I’ll Cover You” from Rent The Musical. The group also received a Freddie G Excellence in Acting award. Anthony Costello, Chela Parris, and Josh Thompson made it to the call-back for future shoots for “how-to” choreography videos for soon-to-be released musicals.

At the 2019, 2018, and 2017 Junior Theater Festivals Atlanta, the Community Theatre of Greensboro won a Freddie G Award for Excellence in Music.

Also at the 2016 festival, student Izzy DuMond received a Freddie G Excellent Individual Performance by a Female award. Community Theatre of Greensboro also presented Madagascar JR. to all festival attendees at the New Works Showcase, and students Trinity Evans and Kira Arrington were selected as finalists for a callback to film national choreography videos.

In 2013 and 2012 students from the Community Theatre of Greensboro earned a Freddie G Outstanding Achievement in Dance award. In 2013, student Haile Ferrier made it to the final call-back for choreography video shoots.

In 2011, CTG students won a Freddie G Outstanding Achievement in Acting award, and student Loren Brunson was cast in choreography videos. Furthermore, teacher Rozalynn Fulton was one of eight educators from across the country selected for the Freddie G Experience award. The Freddie G Theater Experience is a fully-funded weekend for educators in New York City complete with performances, celebrations and workshops.

About the 2020 Junior Theater Festival West

Disney Theatrical Productions President and Producer Thomas Schumacher offered the festival keynote in collaboration with Jonah Ho’okano and Kaena Kekoa, who both perform in the Aladdin North America tour.

Based in New York City, for the last decade iTheatrics has established itself as the world’s leading authority on musical theater for young people. The company works with leading public and private companies around the world — including the White House, the Kennedy Center, NBC and all the leading theatrical licensors — to make sure that young people everywhere have access to quality musical theater programs.