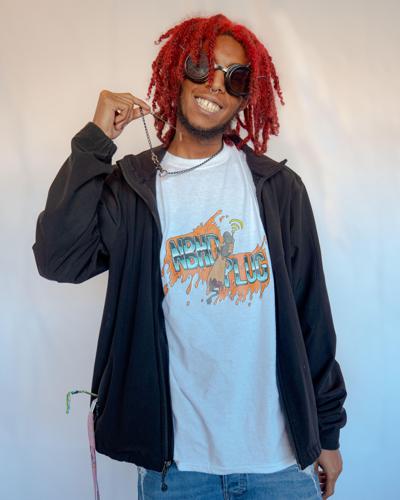 High Point rapper Lil Kawaii (aka Skrimp) looks to get fried and serve hot fire on his new album Skrimpwav.

On his latest record, Skrimp continues a path of self-growth and the human condition in blunt wraps and anime binges. “Basically, this album represents me falling apart and noticing everything and how I should learn to move and how to rebuild myself,” said Skrimp, belaying the facts of life in his early-20s.

Thematically, Skrimpwav is “a bad acid trip to learn from,” Skrimp said, one that rides cresting waves of “figuring stuff out and destroying and healing.” The serious and silly are intertwined in the smooth sounds of his latest single, “Rage.”

“This track is just me expressing myself,” Skrimp explained. “It’s a lot of venting. Sometimes I can be mean, sometimes I can’t speak to people, or I don’t want to. It’s just me explaining, like, I’m human too, you know?”

Within that humanity, Skrimp swirls rhymes of “truth, passion, lies, deceit, drugs, abuse whether its substance or emotional,” he said. “I just run the whole spectrum of human emotions,” he added, through a variety of faded lenses, smoked-out steampunk goggles, and Hunter S. Thompson references--the mind-bending explorations from the famed gonzo journalist directly influenced the album.

Other influences include what Skrimp likes to call “trip music,” such as the bands’ Crumb and Tame Impala. He’s also been diving deep into R&B and alternative music but considers Smino his main musical inspiration to date. “That man taught me I can talk however I want to,” Skrimp said. “Just listening to Smino gave me so much more confidence to explore and experiment, especially when it came to my vocals. That switched the game for me.”

Looking at the history of his game--starting with middle school raps and his first official release, 2019’s “808 Grand,” Skrimp feels more confident in his performance. “I feel like I got more swag with it now,” he said. “I’m wavy, like the ocean.”

Skrimp credits open mics and the Artist Block for helping him build the swell that defines his current artistry. “That’s what really broke down the walls, and then I met people like Maggie Lee and Virginia Holmes (from the Haze Art Collective). They put me on shows to perform, and I really adjusted on stage.”

Sinematics makes an appearance on a couple Skrimpwav tracks, along with Flower in Bloom, KamDoja, and Corey Knoxville. They’re all friends along for the ride (and the records).

“Honestly, Corey and Sinimatics had no choice. I was already supposed to do something with Doja, so this was perfect timing, and I’ve been tryna secure myself a Flower feature for a minute.”

The Flower in Bloom feature isn’t Skrimp’s first with Steady Hype Artists: he and Samurai Yola released a collaborative tape under the dual-persona “Samurai Kawaii” in 2020.

Skrimp and Knoxville met in the Entertainment Tech program at GTCC. “We got close,” Skrimp said. “Shoot, look at us now. I know some of Corey’s darkest desires,” he added with a laugh. The pair often work together, in efforts Skrimp refers to as the “FriedRiceBoyz,” wherein folks can soon expect some sort of “Fried Rice heat,” potentially in the form of the third installment of Skrimp’s “Fried Rice” album series. Parts One and Two were released in 2020, with Knoxville appearing on nearly all tracks.

Skrimpwav, however, features a more diverse range of artists, including KamDoja, featured on the “Doja Burnin” second single, which Skrimp puts between “a smooth Smino song and some Ari Lennox.” “That’s heaven,” he said.

Referencing the track, he considers it “one of the smoothest songs I’ll probably ever make. It hits the ears and just steals ya soul with such a melodic, easy, smooth deep burn vibe,” he said. “That’s that baby-making music.”

Skrimp’s solo on his upcoming single, Mista Hubbard. “We’re still human, and we continue to go through cycles and cycles,” he said of the process behind the album as a whole. “I’m just trying to learn myself as everyone else is trying to do the same.”

For his current cycle, he holds the mantra: “Skrimp were meant to swim upstream, not down,” he said. “It’s a daily reminder to myself and to folks around me to keep going.” Dropping a load of anime references, Skrimp noted, “sometimes I feel like Broly, and I wanna power up, sometimes I feel like Shikamaru and stuff be a drag; and sometimes these folks be Orichimarus just snakes.”

“Basically,” he clarified, “shit gets hard and uncontrollable at times, and it’s hard to stay focused or just to stay down and have patience when you come up. My dog needs her own house. My cat needs a catmobile. So I’ve got some work to do. “

Skrimp’s also got a summer of new releases, as he gets it together. Be on the lookout for the Mista Hubbard video. Skrimpwav is out now.