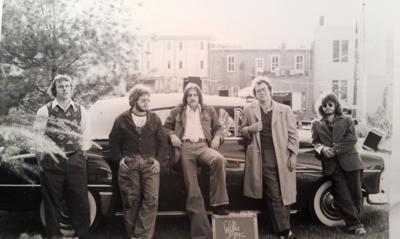 May 12 marked the passing of a beloved Triad masterful musician, producer, and former owner of The Wild Magnolia Café in Greensboro, James Michael Rowe AKA “Chef Mike.”

Terry VunCannon is a musician who formerly played in a variety of local bands such as Whiskey Foxtrot, Lawyers, and Guns & Money with Melva Houston, and he is the owner of V-Muse Lap Steels in Greensboro. VunCannon said Rowe had a powerful personality, both on stage and off. He said Rowe hired him for his very first gig at age 19 and taught him all about the music world for 20 years.

VunCannon also played guitar with Rowe in both The Willie Boy Band and The Michael Rowe Band.

VunCannon said that Rowe was a true businessman, and he demanded 100% effort from his band. While most bands learn 30-35 songs, VunCannon said Rowe had them learn 85-125 songs of different styles to play rock ‘n’ roll clubs, beach music, as well as rhythm and blues. He would play the music at proms, sorority houses, and college formals where they wore their “dress whites.”

VunCannon said that Rowe would say, “When the whites come out, the money gets bigger,” and had a special “keep it going” signal for the band to work the crowd. VunCannon said they played six nights a week as well as some Sundays in the Carolinas, Virginia, Georgia, Florida, and Alabama for four and a half years.

Rowe’s best friend for 60 years is Cliff Miller, the Sound Engineer of SE Systems in Asheboro. Miller said he met Rowe in high school during the 1950s, playing clubs and bars “where it wasn’t legal to enter without chaperones.”

Miller and Rowe continued to play music together off and on for over 40 years. He said that Rowe later moved to Los Angeles, where he did a lot of songwriting and music recording.

“Rowe was a very good instrumentalist and one hell of a singer,” Miller said. “He was super-talented, fun to be around, and worked really hard.”

Rowe played in Brice Street Band as a multi-instrumentalist from about 1983-1986 with Jack Atchison, Doug Dennis, and Michael McAdam.

McAdam has played with Steve Earle & the Dukes, Mary Chapin Carpenter, The Good Humor Band, and many others. He now plays with the Tim Carter Band, in addition to writing his own songs.

“I’m gonna miss Mike, he was always a good hang,” McAdam said. “We met when I joined the Brice Street Band in ‘84 and hung out in New York in the later ‘80s. Mike was smart, funny, a very talented musician, always well read and well informed, whether the subject be the arts, politics, food, audio or current events. He was a great guy to have sitting next to you on the drive to the next gig. I hate that he’s gone, but I’ll always have good memories of sharing a stage with him.”

Miller said Rowe was a very versatile musician who could play drums, bass and the keyboard. Miller said Rowe left Brice Street to move to New York for his wife’s job, and it was there that he opened Memphis Studios. When he returned to Greensboro, Rowe transformed an old service station into The Wild Magnolia Café (1995-2005) at the corner of Elam and Walker Streets, where he was known as “Chef Mike.”

Miller recalled that the café was a great place to get together, and he said bands playing there would always invite Rowe up on the stage to play a song.

When the café closed, Rowe started working on Austin-Healey cars. Miller said Rowe was very creative and was a person who looked at things through a different lens. Miller said he became Rowe’s “enabler with all sorts of projects,” including putting Rowe’s Mustang engine into an Austin-Healey.

Miller said his heart is with Rowe’s family, his wife, Denise, and his daughter, Lily, during this sad and chaotic time.

“Mike lived a great life, he had a lot of fun, and in the end, he had no regrets,” Miller said. “I will always remember him as being full of life, and there will most definitely be a celebration of life, at the proper time when all his friends can gather, and share stories in Mike’s honor and memory, and there could also be a music tribute.”

Rowe was a very private man, VunCannon said, and that his career started back “when musicians used scrapbooks for newspaper clippings.” He said Rowe didn’t care much for computers, so he wasn’t on the internet, but the people who did know Rowe were always touched by his caring, kindness and passion.

“The last thing he said to me was, ‘I love you, I’ll see you again soon,’” VunCannon said.