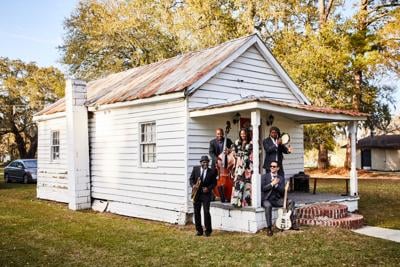 Lowcountry Meets the High Country when the South Carolina quintet brings their jazz-influenced arrangements of traditional Gullah music to Boone.

BOONE, NC —Appalachian State University’s An Appalachian Summer Festival (AASF) concludes its 37th season with the Grammy-winning band Ranky Tanky in an outdoor concert at State Farm Road Concert Lot on Saturday, July 31, 2021 at 8pm. The soulful songs of the Gullah culture are brought to life by this quintet of native South Carolinians who mix Lowcountry traditions with large doses of jazz, gospel, funk, and R&B. From playful game songs to ecstatic shouts, from heartbreaking spirituals to delicate lullabies, the musical roots of Charleston, SC are fertile ground from which these contemporary artists have grown. To purchase tickets (sold in pods for up to two, four and six people), visit or call the Schaefer Center box office at 800-841-2787 or 828-262-4046, or purchase online at AppSummer.org.

Ranky Tanky — whose name roughly translates at “work it” or “get funky” — have achieved many firsts for South Carolina’s West African-rooted Gullah community since their formation, earning yet another milestone earlier this year at the Grammy Awards by taking home the Best Regional Roots Album prize for their sophomore release, Good Time. The album, which also hit No. 1 on Billboard’s Contemporary Jazz Chart, combines songs carried down through generations in the Sea Islands of the Southeastern United States with the band’s own original compositions in the Gullah tradition. In Ranky Tanky’s hands, this style of music has been described as “soulful honey to the ears” (NPR) while being covered by the New York Times, NPR’s “Fresh Air” and The Today Show.

Ranky Tanky are five lifelong friends from Charleston, SC, who have established themselves as passionate global ambassadors for their local culture and community, helping to faithfully preserve the traditions originated by African Americans in the coastal South during slavery that are kept alive through the present day. The band have been featured on NPR's “Fresh Air,” The Today Show, PBS Newshour and The Late Show with Stephen Colbert #playathome. Ranky Tanky were honored to be featured artists in President Biden’s inauguration event, We the People. They were the subjects of a 10-page profile in Oxford American’s South Carolina Music Issue and were named 2020 Artist of The Year by the Charleston City Paper.

The outdoor concert at the State Farm Road Lot (235 Dale St., Boone, NC), will take place rain or shine. No umbrellas permitted. For weather-related text updates exclusive to this show, opt in here.

About An Appalachian Summer Festival:

Presented by Appalachian State University’s Office of Arts & Cultural Programs, this annual celebration of the performing and visual arts is held every July in venues across the university campus, and features an eclectic, diverse mix of music, dance, theatre, visual arts and film programming. An Appalachian Summer Festival began in 1984 as a chamber music series, and retains strong roots in classical music, combined with a variety of other programming geared to almost every artistic taste and preference. With an audience of 27,000, the festival has been named one of the “Top Twenty Events in the Southeast” by the Southeast Tourism Society in recent years.