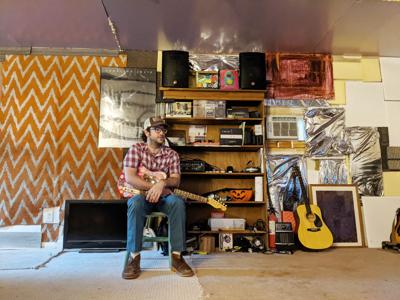 Anthony Harrison’s Garage Country comes to light in his debut album covering two decades of performing and songwriting across the Old North State.

Born and raised in Greensboro, “I’ve never lived anywhere but North Carolina, whether that be by choice or chance,” said Harrison (a Durhamite these days) recalling his performative start as a Livestock playing theatre kid, and member of the Grimsley Madrigals choir. “Talk about an elevated, theatrical influence,” he noted. “Singing hella old, esoteric music—at the ren faire in period costume and all,” he said.

First learning the bass (a la a Pixies cover) Harrison joined jazz band senior year and dampened his rock ‘n’ roll feet in the garage-four piece, Starlyn Garvy. An “abortive stint in studying music at Appalachian State,” followed—along with the 15 years of songwriting foundations heard on his debut.

“I hit my early 30s and realized I had a backlog of songs that I still hadn’t gotten down,” Harrison explained of taking his time. “Eventually, my anxiety kind of worked in reverse and got me to finally fuckin’ do the damn thing—as a survey of a decade and a half of songcraft, it is all killer, no filler. I do not truck in bullshit.”

Harrison prefers delving into more “regular shit” on Garage Country. “You know,” he said, “mental illness, history, art, literature—memories of youthful hedonism and debauchery.” Tails of resilience for the rejected, depressed, anxious, and obsessed. “I call myself a realistic optimist,” he noted. “Things are really bad right now — that’s reality. Realism can breed cynicism, and I wouldn’t consider myself an exception to that. But I hope against hope that things can and will get better.”

In that, Harrison levies personal notes across topical lenses—despite attempts to shy from “protest songs.”

“There are other artists out there who can write political music much better than I could hope to,” he said, pointing to the Muslims—the Greensboro-tied punk trio out of Durham with a new album “Fuck These Fuckin Fascists” out on Epitaph Records.

“But I keep my music open to point out that this country is fundamentally unjust,” he said. “Capitalism is the cancer of the modern world, and oppression by minority rule was baked into our founding documents by those who held people as property and thrived off their stolen labor.”

Harrison hits his political zenith on the preceding track, “Land of Gold.” Written during a depressive episode, the song stems from “thoughts about how we’ve gone through another god awful year of further isolation and atomization, all turbocharged by this continually bungled pandemic,” he explained. “We gotta keep things open so business keeps booming and conservative babies can have their Applebee’s or whatever.”

The song itself offers a plea “to map out a world that isn’t impossible,” Harrison explained, harkening a love for the Clash; and reflecting on being raised by a distinguished NC defense attorney—the revered Fourth Amendment specialist, affectionately known as “Cocaine Wayne” Harrison. “While a flawed man, my father definitely instilled in me a sense of justice,” Harrison said. “Both of my parents truly raised my sister and I to be critical, empathetic, open-minded thinkers.” An exchange between his mom and sister inspired “(Now I Know) You Know She Knows,” further hinting at his familial foundations.

Following Harlan Howard’s path of “three chords and the truth,” Harrison turns remarkably bookish on musical offerings. “Gospel, parlor music, early jazz, blues, country — all that led to rock, a music based around that notion of simple progressions and simple lyrics,” he explained. “Either despite or thanks to that simplicity, popular music has always communicated profoundly relatable feelings and energy. But the idea of what’s simple and relatable has changed quite a bit over the breadth of 170-plus years.”

Similarly, so has the South. “The South, for example, has changed quite radically since Stephen Foster’s days,” Harrison explained, name-dropping the famed 19th-century composer. “And Southern rock deserves to be more complex than simply reflecting a conservative, white, male experience.” Eschewing nostalgia, Harrison looks to reflect living in a Southern city in the 21st century. “I sing with a Southern accent about doing data entry for an immoral startup because that’s my truth,” he said. “And it’s true for a lot of people down here.”

But it’s also more complicated. “Should I own Southern rock, or is that too wrought and problematic?” Harrison wonders as he strives to explore sounds without labels. “But it’s a funny line I’m treading,” he continued. “Am I country? I don’t feel I have the bona fides.”

“I’m very much into history, and am an amateur musicologist,” he added. “Sometimes, I wonder if this isn’t all just some grand musicological theory I’m testing out: What happens if a guy who likes Stereolab as much as he likes Willie Nelson tries to make alt-country music?”

In that, Harrison holds an affinity for Tom Petty in “crafting a sound both Southern and cosmopolitan,” he said referring to the Heartbreaker as a role model in the sonic amalgam Harrison considers his “piedmont sound.”

“The Piedmont is a jumble, isn’t it?” he added, geographically speaking. “There’s these respectable-sized cities on the up-and-up, but drive 10 minutes outside any; and you’re smack-dab in insular, rural America, for better or worse.” Garage Country is an effort juxtaposing the two.

For recording, Harrison utilized an actual garage—enlisting help from Denk Studios in Durham. “I valued something fast and loose and fun over something perfect,” he said, praising the work of engineer (and album-drummer) Jam Phelps.

“It’s absolutely wild to think that my lyrics range from a solipsistic squawk to an altruistic plea,” Harrison noted of the album’s tracks—pitting “Harm,” (a song “only a young dipshit could write”) against the hopefully somber “Land of Gold.” “I’ve grown up a lot,” he reckoned. “I went from being an aimless, depressed kid to a focused (but still depressed!) adult.”

“But I do enjoy that 15 years later, JK Rowling has proven to be such an asshole that ‘picked up another fucking Harry Potter novel’ holds just as much spite now as it did then,” he said, with a shift toward the future—and material for a sophomore album.

“Garage Country” is out now.