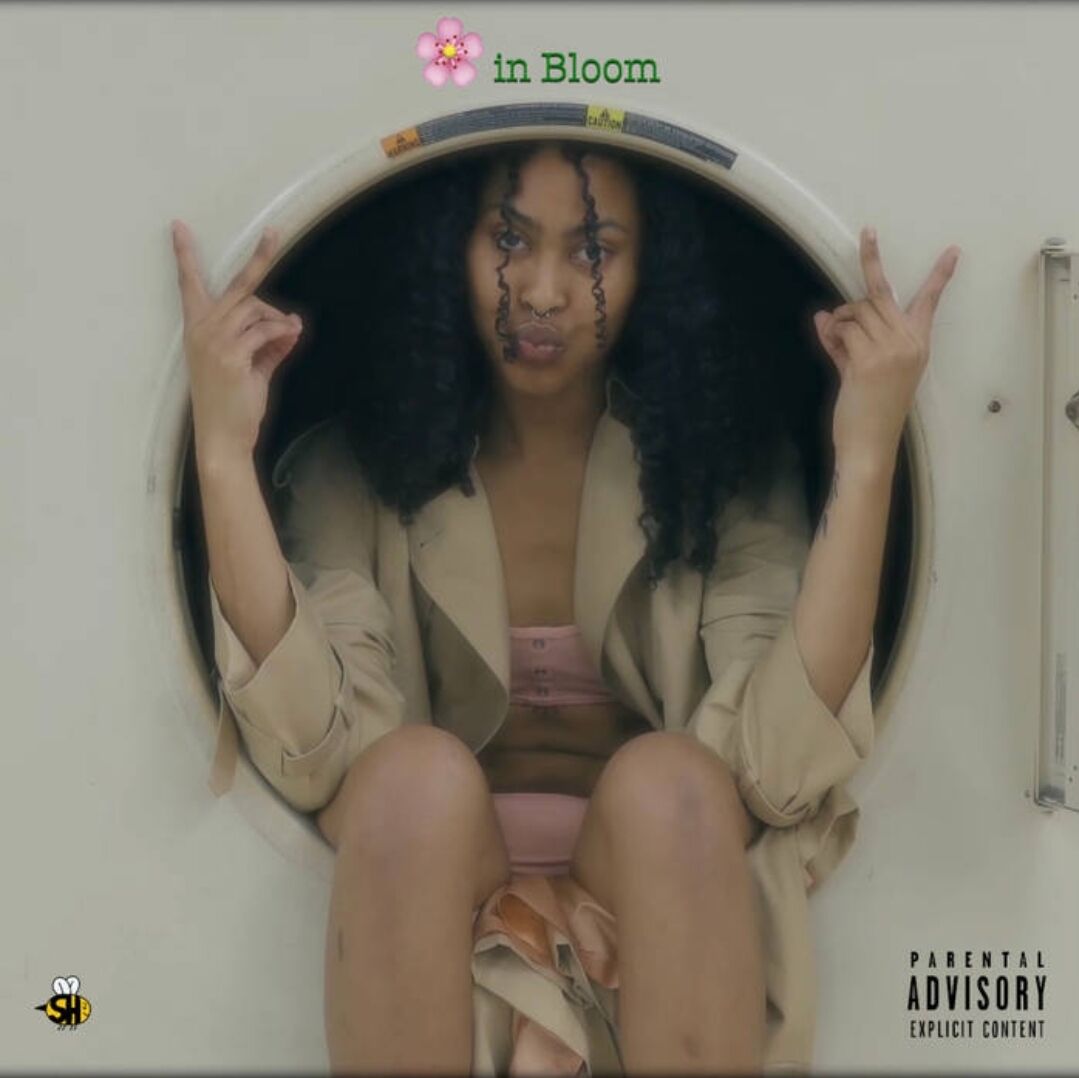 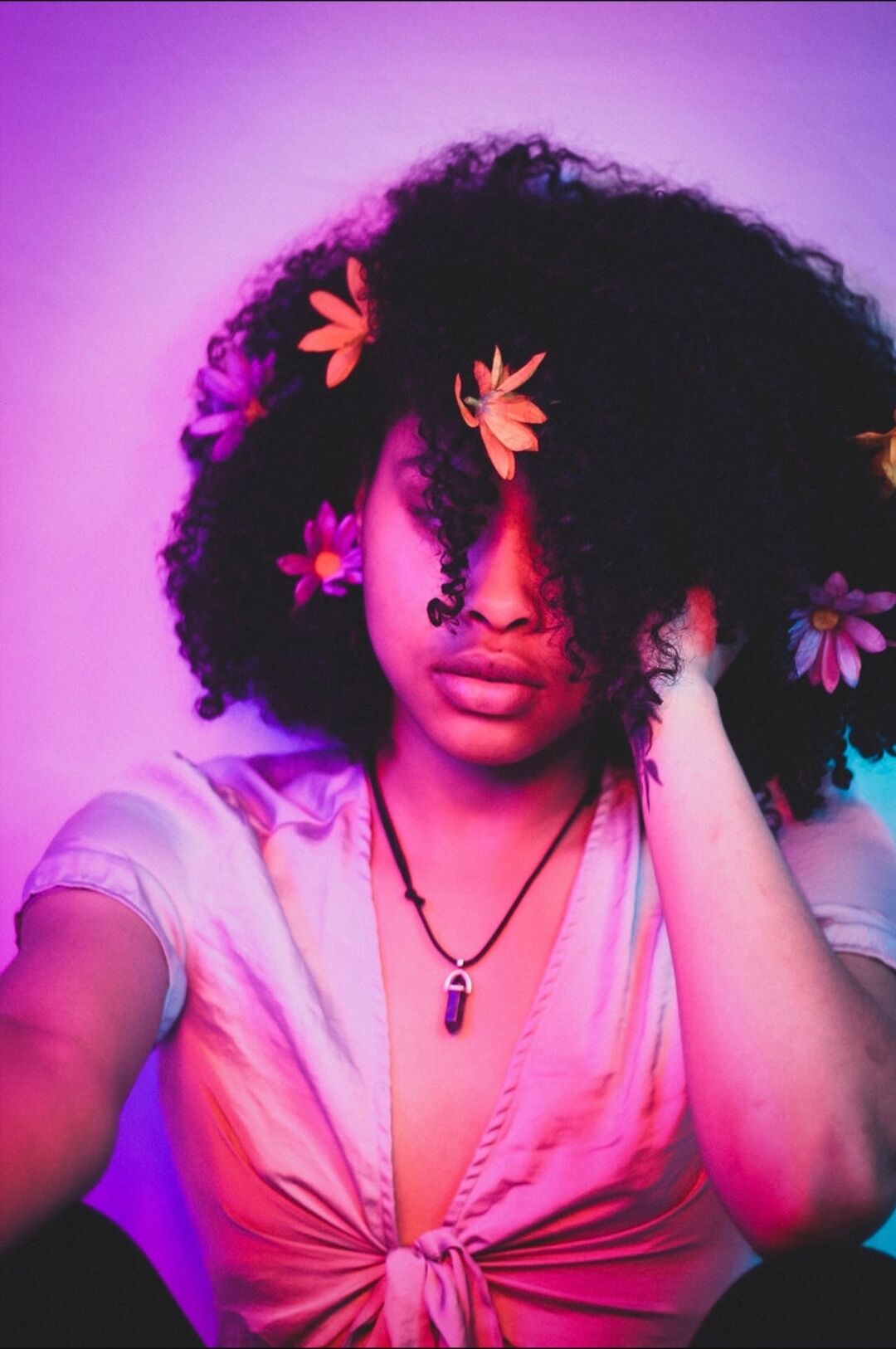 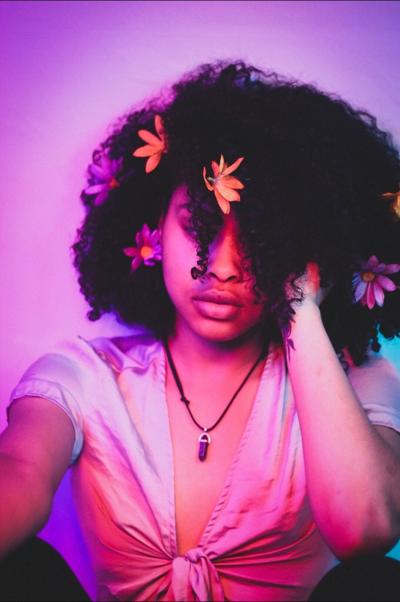 Spring is in the air, and with new singles, new videos, and her own seedling on the way, Winston-Salem alternative R&B artist Flower In Bloom is coming up roses.

“I’m super excited for spring,” said Joy “Flower In Bloom” McNeil, a queen bee figure and vocalist in the Steady Hyperactive multimedia collective. “I love going outside and sitting with nature,” she added, noting she’s “definitely written a few songs in a tree or on the grass.”

McNeil’s natural connection goes beyond songwriting settings. She’s currently working in a friend’s family greenhouse, learning to garden in the soil while cultivating her catalog of releases in song, finding foundation in the flux of budding stems, and laying tracks.

“A flower has to be in a state of change to bloom,” she explained of her artistic connection to floral arrangements. “I make any kind of music I want, I work on myself every day, and I’m blessed with better and new opportunities as time goes on,” she continued, “so me, a Flower, am always in a constant state of change.”

On that note, McNeil’s favorite blooms come from daisies and hibiscus, while sunflowers hold a special place in her heart. “My grandma, who was one of my favorite humans to ever exist, loved them,” she explained, recalling a childhood voice lesson “from a lady that played piano at my grandma’s church.”

From a shy kid in the church choir, McNeil blossomed into a vocalist, with a foundation rooted in her sense of authenticity and artistry. Dismissing artistic comparison, she lists a backbone of influences amongst artists like April, Ravyn Lanae, Frank Ocean, and Tyler, the Creator. “I love their sounds and the way they structure their songs and melodies,” she explained. “I challenge myself to ride that wave when I create my music.”

Riding that wave, McNeil doesn’t limit herself to genre or thematic source; and derives material from life experiences put into balance. “Lately, I’ve noticed that I’ve been releasing in a pattern,” she explained. “I make something sad or more intricate, and then I’ll make something fun, something you can jam to.”

Choosing to sprinkle singles, like seeds, plotted over individual platforms, McNeil takes a don’t-look-back approach to the catalog she’s been growing since her 2019 debut EP, “Purple Sunflower,” and her more-preferred 2020 follow-up, “Floral Essence.”

“The more I grow as an artist, the cringier my old music becomes,” she noted. “I like my old songs, and I’m proud of them, but it’s weird hearing your progression—especially if your sound changes almost with every new release.”

With eyes ahead, “I really just write about whatever comes to mind,” she said, turning toward her latest streaming single, “just sayin sh​!​t;” and its predecessor, “sadboyyy,” (released solely as a video over her YouTube channel,) a song stemming from heartbreak.

Both tracks were engineered by Volz, the genre-bending Winston-Salem artist, who McNeil considers an artistic mentor. “We both enjoy creating our own waves,” she explained of their frequent collaborative endeavors. “We’re truly just making music we like to make,” she continued, referencing “Look Boo, the Stars Are Out,” (the latest Volz album on which she appeared) as “fireee.”

With a growing roster, including works with Triad artists like Chezxo and Chasyn Sparx, McNeil’s vocal essence continues gracing hot tracks, like “Schnitzel”‌ and “St. Nick” from OG Spliff, and more are on the way.

Though these days, at 10-weeks pregnant, her real-life collaboration with Samurai Yola is holding her full attention. “It’s dope to be on a journey like this with your best friend,” she said, “and it’s funny because we talked about making a collab-tape, but we’re getting a superstar-to-be instead.”

The pair is part of the Steady Hyperactive multimedia collective, which already boasted a family-like connection amongst its members. “They really pushed me to want to create my own music,” McNeil noted of the group. “They’ve always been super supportive, even when I was just getting started.”

With her budding music career and impending motherhood, McNeil looks forward to finding her own path. “I really just like to go with the flow,” she said, “and I’m excited to see where the music takes me.”

As the flowers bloom with spring’s arrival, fans can be on the lookout for new singles from Flower In Bloom. Her latest tracks are available via streaming platforms and over her Youtube Channel.

Katei Cranford is a Triad music nerd who hosts the Tuesday Tour Report, a radio show that runs like a mixtape of bands touring NC the following week, 5:30-7p.m. on WUAG 103.1FM.